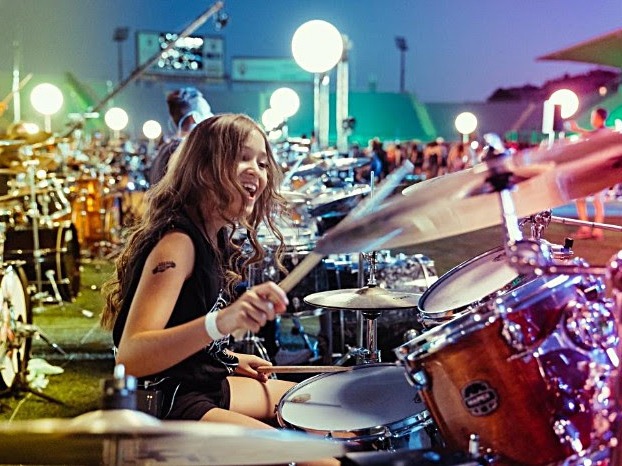 The two specialists liaised an impressive team of professionals in the lead up to and during the show, including Francesco Penolazzi, audio veteran and sound designer for the show, and FOH engineer and system tech Luca Stefani.

Penolazzi and Stefani had to specify the equipment in advance for an event with no precedent, basing their selection purely on experience and acoustic predictions at a very early stage.

As Rockin’ 1000 is self-financing, there was a balance to strike between value whilst making no compromises when it came to quality. The team settled on the main Outline PA with 10 stacks (6 with 6 GTO C-12 each and 4 with 5 GTO each) and 6 lines of subs, all in end-fire array (four formed by four DBS 18-2 and 2 made up of 4 LAB 21 HS).

Terra explained: “The PA was powered by 16Powersoft X8s and the monitor set up (Including ‘foldback’ between conductor Peppe Vessicchio, the stage manager and musicians) by three more Powersoft amps, all connected via Dante and with an analogue backup. The X8s enabled us to monitor the status of the mains supply. With mains feeds coming from various parts of the field, it was important to have a general overview, and the X8s also allowed us to do a little tuning and alignment responding to cues from the team.”

Outline tech support and R&D engineer, Giulio Gandini, expands on the technical approach to this out-of-the-ordinary gig: “The pitch area was huge with all musicians spread across it. The brief from the sound engineers was for the PA to reinforce the sound arriving from the musicians and keep the listening experience as realistic as possible. It was one of those rare cases the usual rules don’t necessarily apply.

“In this scenario, you would generally try to achieve even coverage with as little overlapping as possible between enclosures to ensure identical sound in every seat, but here we had to overlap between the various clusters to deliver realistic sound.”

On the loudspeaker set up, he continued: “The systems were quite far away from the audience, so the use of line-array elements fitted with precise waveguides meant we could achieve extremely accurate sound coverage. The brief was for clusters with five or six enclosures in order to have a suitable vertical configuration ensuring a good throw with the low frequencies – crucial when amplifying an almost 1500 strong band!”

The Powersoft and Outline teams had to consider carefully the fact that the majority of the PA was aimed at the stadium’s roofed stand, which had different acoustics from the roofless curves. During calibration and fine-tuning, they worked hand-in-hand with the sound engineers to optimise the results, using Powersoft’s intuitive, proprietary Armonía software, which controlled the Powersoft amplifiers.

Armonía allows projects to be set up offline and then matched to the hardware at the venue, saving time and allowing for testing in advance. An Outline Newton 16+8 system control and networking unit also received signals from the main FOH console and was on standby in case of network problems – receiving a Dante signal distributed to the amplifiers on the pitch.

FOH engineer and system tech Stefani looks back on Powersoft and Outline’s contribution to the show: “Outline’s GTO system is one of the few on the market that delivers the sonic impact we want and above all, thanks to its lengthy pedigree, it can be trusted in terms of reliability. In my opinion, the Outline systems are excellent for this type of event, at which SPL and pattern control are both fundamental elements for achieving the necessary results. Furthermore, Powersoft’s power to size ratio packs an impressive punch, while the channel routing and DSP features were critical to getting the desired result. Together, Powersoft and Outline delivered a sonic force to be reckoned with!”

Powersoft’s Terra reflected: “It was such a thrill to partner the Rockin’ 1000 with whom we share an unwavering passion for exceptional sound. There’s no doubt that a project of this magnitude brings a unique set of challenges, but by bringing our skills and expertise to the party we were able to deliver a pristine sonic performance to an electrified audience. The event was awe-inspiring and we’re incredibly proud to be a part of this special movement showcasing Italian creativity at its very best.”