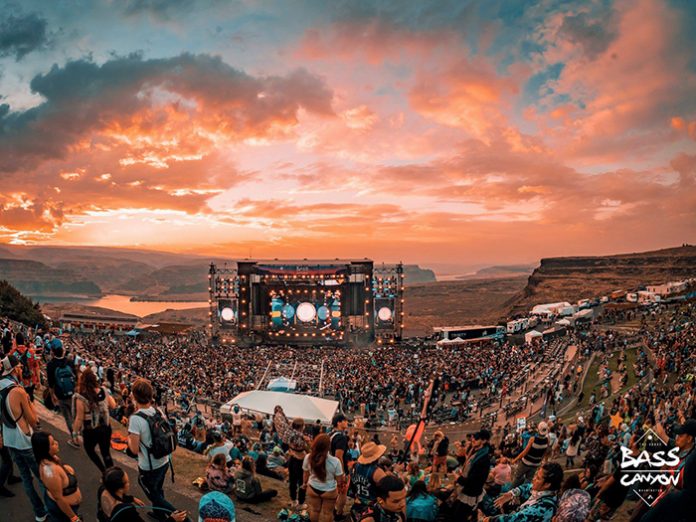 PK Sound and Excision joined forces to present the first ever Bass Canyon Festival at the Gorge Amphitheatre, a naturally scenic venue located near the Columbia River Gorge, Washington, and operated by Live Nation.

A crowd of 18,000 attended the inaugural event for four nights of camping and three days of non-stop Bass Music featuring performances by 40 artists, in addition to headliner Excision, who performed 2 solo sets plus a special Excision b2b NGHTMRE performance — all of which was powered by PK Sound.

For seven years, Bryan Andres has worked with PK and DJ/producer Jeff Abel (aka Excision). He said that Excision has used PK Sound subwoofers and monitors since the start of his music career and since the introduction of the Trinity Advanced Line Array in 2015, Excision has been exclusively using PK Sound speakers for his entire rig whenever he headlines, just as he did at this year’s Bass Canyon Festival.

The 2018 Bass Canyon Festival featured 16 Trinity Advanced Robotic Line Array speakers per side in the main hang, plus four out fill Trinity speakers on each side of the deck; 12 Gravity 30s and 44 CX800s in the main ground cluster, plus 6 CX800s per side flown behind the main hangs. An additional three hangs of eight PK VX10 compact arrays were deployed as filed delays.

Andres noted it’s Excision’s long history with the company that made PK Sound the ideal speaker system to power the Bass Canyon Festival. “For Excision, it’s always a guarantee that his rig is going to sound the way he likes it,” Andres said, “because PK Sound has that low end that he’s looking for. Plus, with Trinity, we have the punch in the mid-range and the clarity in the top. So, he knows that he’s going to get the best result — and the best sound — for the way he makes his music.”

While Excision has always trusted PK Sound to give him the live sound he’s looking for, adding Trinity Advanced Robotic Line array to his P.A. system is what helped to distribute the sonic experience of Bass Canyon evenly across the Gorge Amphitheatre’s natural terrain, providing a uniform listening experience for all attendees to the festival, from those dancing in the pit to those on the Terrace and in the Premier section beyond.

“Because you can change the directionality with Trinity,” Andres said: “you can actually narrow the sound field in the top boxes and focus the sound to go farther, making more of an impact on the higher, farther distances that you’re aiming for,” across the entire audience. “It was really nice at the Gorge,” he continued, “because we had the top boxes angled up. Then, by focusing the horizontals, we were able to push the sound pretty high up the hill.”

Calibrated sound distribution throughout the Gorge wasn’t the only benefit the PK Sound speakers provided. “The P.A. goes up really quickly,” Andres said. Which resulted in a smooth set up working alongside the ambitious stage production and lighting design for The Paradox and the technicians who built it.

Flawless from the start

As a witness to the inaugural Bass Canyon Festival, Andres attested that it was a hit with attendees. “It was great! People loved it, and it was definitely a success,” repeating that the show was flawless, “and there were no issues.”

With such a formidable turnout for the first Bass Canyon Festival, Andres speculates that there could be another next year. In the meantime, Bryan is already working on the next shows, including this year’s Lost Lands Festival, 14-16 September in Thornville, Ohio, and Bassnectar on 29 September in San Francisco, followed by a few weeks on tour with SNAILS in early October. When it comes to PK Sound powering electronic music events, Andres laughed, “It just — it doesn’t end.”