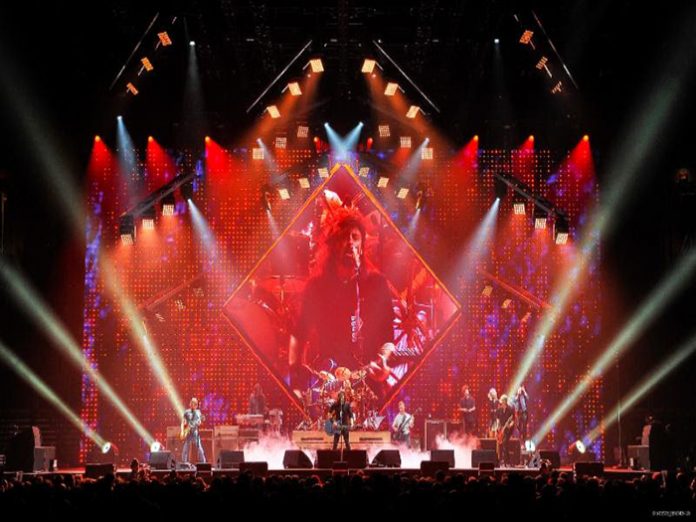 Foo Fighters’ long-term lighting designer Dan Hadley chose the powerful, retro-styled Philips VL6000 Beam fixtures for very particular reasons. With the diagonal square artwork of the band’s 9th studio album Concrete and Gold as the inspiration for his basic motif, he wanted to incorporate its distinctive 45˚ and 90˚ angles into his lighting design.

“The main thing I needed from the ground row was a fat beam and a fixture that would keep a balance with the fixtures that hang above,” said Hadley. “Once I saw the VL6000 I knew there was no substitute. There wasn’t another fixture that I knew of that came close to offering the look of the fat beam and the big reflector and, since these are all used on the floor, the physical presence needed to pull its weight almost as much as the light coming out of it.”

Hadley is happy with the output of the VL6000 Beam. “I needed a fixture that could hold its own in terms of brightness in front of the two upstage video walls. That’s always a challenge, and the VL6000s don’t struggle a bit.”

As the tour has progressed, Hadley has added further VL6000 Beam fixtures to his design. “We started with 12 placed in a V formation on the floor, upstage of the band and once we’d done a few arena shows I was excited to add another 12 under the side IMAG screens for the upcoming outdoor shows. We’ve now done a dozen or so stadiums in Australia and South America and they’ve proven to be exceptionally good wing lights.”

Commenting on the fixtures’ suitability for the tough touring environment, Hadley explained: “They have been very reliable, even through some adverse weather in the stadiums, such as a surprise hailstorm in Porto Alegre, Brazil. They’re lightweight for their size and easy to manage.”

Martin Palmer, Vari-Lite Product Manager EMEA, Philips Entertainment Lighting, concluded: “Our aim is to create products which bring genuine benefits to lighting designers’ work and the Philips VL6000 Beam is an outstanding example of that. Its powerful light output, combined with its own undeniable good looks, make it a unique proposition for designers creating these technically demanding, visually spectacular stage environments.”