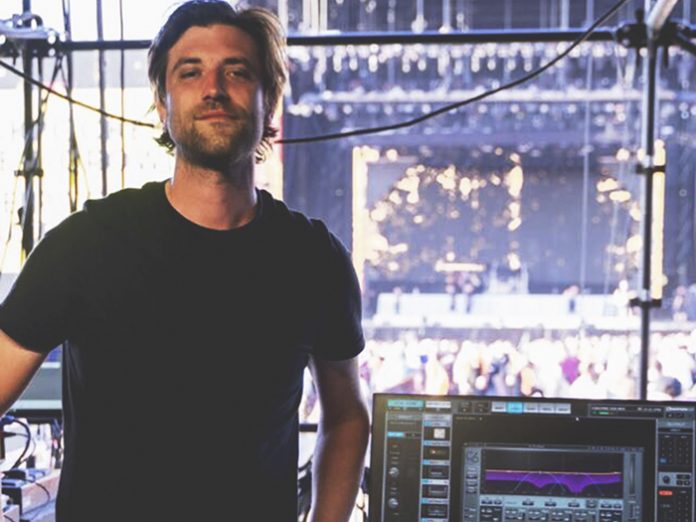 FOH sound engineer Owen Charles (Yungblud, Jay Electronica, MF DOOM, Dusky) chooses tools from Waves Audio, including the eMotion LV1 Live Mixer and Waves plugins, for the 2019 tour by Australian electronic/drum-and-bass act Pendulum. Since debuting in 2003, Pendulum have released three studio albums and have become one of the most acclaimed live acts in the world, thanks to their breakneck mix of Drum & Bass and aggressive rock elements.

Charles explains how his Waves eMotion LV1 software mixer, where each of the mixer’s channels has its own plugin rack capable of running up to eight SoundGrid-compatible plugins, brings his live mixing to a whole other level: “For Pendulum at FOH I use three touch screens with two Icon Platform M Controller fader banks. We have two Waves SoundGrid Extreme Servers with one running as redundant, one DiGiGrid IOC for FOH Local I/O. On stage we use four SoundStudio STG 2412 stage boxes, with one SoundStudio pair running as redundant.

Since redundancy is extremely important for us, we decided to split the stage inputs to two sets of stage boxes, one running on input A to the LV1 and the other running to input B. That way, if one of our stage boxes goes down, or we lose connection from FOH to stage, then we can simply switch to the B inputs on the eMotion LV1 mixer with a push of a button (User Defined Key) and continue the show with no problem. I also have the eMotion LV1 software running on my laptop in case something should happen to my main computer in transit, where I can then simply connect my laptop, load my latest show file and continue as normal. So, we have full redundancy pretty much at every step of the way. There are not many desks on the market that offer such functionality.”

On choosing the LV1, he added: “There were many reasons we decided to make the switch to LV1. The first is the power of the plugins; Rob [Swire-Thompson, Pendulum’s vocalist] and I have been using Waves plugins ever since we started mixing, and we were both very excited to have the full complement available to us in the box without any external devices needed. Rob has always been involved with the FOH mix and was looking forward to having the ability to go through the mix whenever we wanted. After having toured with the LV1 for almost two years, I really believe that, in terms of mixing, it’s one of the most powerful desks available on the market today.”

He continued: “The desk sounds amazing. The preamps are extremely clear and punchy, the internal processing of the digital audio is excellent and it’s also so easy to use. Some other desks can be very difficult to get your head around if you are jumping on for the first time; however, with the LV1, I believe any engineer can use it for the first time and start mixing within five minutes. It’s designed for mixing, and everything you need is right there at your fingertips. The custom fader layers are very powerful and allow you to condense huge complicated projects into a very manageable workflow.

It is also very scalable; I have done both huge headline-shows and smaller club gigs as well with the LV1 system. For Pendulum I have a relatively larger FOH setup, but with my own setup I can scale it down to just three Pelican cases and fly everywhere with it! It’s also an extremely stable console that is an absolute workhorse. Finally, it’s very quick and easy to set up. I had a festival show recently with U.K. artist, Yungblud. Our tour bus broke down on the way and we eventually arrived on site 30 minutes before our performance began. I had FOH setup and everything line checked with five minutes to spare!”

On his must-have Waves plugins, he commented: “It’s very hard to whittle it down, as so many have become instrumental for me. I would include the Renaissance Maxx bundle as one plugin since I use the Renaissance Equalizer and Renaissance Compressor on every mix I do. They both just work; the EQ is very powerful and sounds great. With six bands available, it has you completely covered, and you can even take it off L/R mode and EQ each side separately for extra stereo width. The Renaissance Compressor can sound very transparent even at higher levels of compression, and I love having the option of choosing an optical compression sound or a warm one. Having the side chain feature as well is great. The Renaissance Bass is an absolute must-have, and I love using it on my kick and toms to add that extra weight to stand out against the huge sub frequencies. Next would be the CLA-76 Compressor/Limiter; it’s a classic compressor that Waves have done a great job at emulating. I use it on vocals, bass, snare and of course for my parallel drum bus set to ‘all buttons mode’ to smash the drums and give them that larger-than-life sound heard on countless hit records.”

“I have really gotten into the GEQ Graphic Equalizer using the modern component. It’s great on the matrix bus, but I really love using it on guitars and vocals as well. It sounds great and gives you easy access to really shape the tone of any problematic sources. I really enjoy setting it to ‘Draw’ mode and swiping your finger across to quickly try different settings and perfecting the sound. The Manny Marroquin Reverb is also great. Previously I have struggled to find my perfect reverb for vocals but when I demoed this reverb it just worked. It’s great for small amounts of subtle reverb or larger more affected settings. It just always seems to interact really well with the room and is so easy to dial in. Finally, it has to be the C6 Multiband Compressor. When I first used it live on vocals it was an absolute game-changer. Having the two floating bands is really useful for finding those annoying frequencies and controlling them completely. If I were stuck on an audio mixing desert Island, then the C6 would be the one plugin I would take. You can really control and shape any source with it as it is such a powerful plugin.”

He continued: “I would also like to give honorable mentions to Waves’ InPhase, with its dedicated live components (for aligning my drum samples to the acoustic kit, bass DI and Mic and multiple guitar mics); the API 2500 compressor; Waves Tune Real-Time; the F6 Floating-Band Dynamic EQ plugin, which is so powerful and has started to take the place of the C6 on certain sources.”

On using Waves’ X-FDBK , a one-of-its-kind plugin which automatically cuts frequencies that cause feedback he said: “When I started out working with Yungblud, the first thing I did was buy the LV1 and put everyone on IEMs. We started up with me doing monitors from FOH and being able to take the desk everywhere with us, which was such a life saver. Using the X-FDBK to ring out the wedges saved me so much time and effort. As long as you’re not trying to get the monitors far too loud, then it works so well at taking out any trouble frequencies – in seconds. Plus, I loved seeing the look on the in-house engineer’s face when they realized the desk was EQing the wedges by itself!”

Owen remarked, about using Waves plugins as unique solutions: ”Obviously sub bass is very important for the Pendulum show. Gareth plays live bass and sometimes we need his bass to provide the sub, while other times, we have sub coming from backing track. Rob came up with a great idea for dealing with this. We have a test tone signal set on the backing track. Whenever we need the sub cut on Gareth’s bass, we have the tone output signal straight into the sidechain of a C6 plugin on the bass, which is set to only cut the low end on the C6 bass channel.

This allows us to automate the low cut on the live bass and finely tune it in for each specific song whenever we need it to happen. It’s a really powerful way to keep everything under control. We also have a test tone for the guitar and use this to trigger a light compressor that brings its overall volume down 3dB. That way we can automate having the guitars come in and out of the mix, helping give them greater definition and space against the synths. Even with this it was still difficult to get the guitar to sit properly in the mix, and that’s where the modern GEQ is great. It gives us so much scope to shape the tone and fit the guitar into just the right space to make it all work together.”