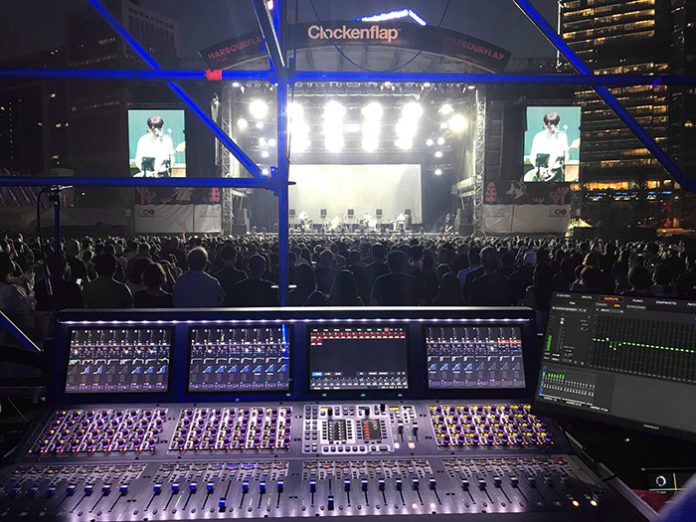 For the 2018 edition of the Clockenflap Festival 9-11 November 2018, the main (Harbourflap) stage and second stage were managed by Alto Stage Management, who called in Davide Linzi of Mister X Service as an audio system designer for both and FOH Engineer for the main stage (assisting productions with their own sound engineer).

Linzi explained why he took Outline’s Newton multi-source audio processor with him for the important event. “I decided to take Newton to Clockenflap because I needed a fast versatile unit that enabled me to create a matrix of inputs and outputs that was fast and effective to manage and control. My workflow required 10 independent inputs always connected with the L-R-SUB-Front fill of the main S6L console, L-R-SUB-Front fill of the guest console, L-R of a production mixer handling walk-in music, publicity audio and emergency and MC mics; the outputs, on the other hand, involved independent control of L-R-SUB-Front fill-L/R Outfill, L/R Delay, a stereo feed for streaming, a reference signal for Smaart and a pair of Dante signals for L/R recording if requested. The major EQ settings carried out during PA tuning were done on Newton, as were any modifications request by artists’ sound engineers.

Newton wasn’t a casual choice: the fact of being the core of such a complicated system and having two independent redundant power supplies was a safety factor that reassured the festival’s producers, who are very demanding as far as reliability criteria and the sound quality of the stages is concerned.

Another fundamental aspect in certain contexts is the enormous flexibility of the matrix and the ease with which numerous I/O can be controlled without worrying about incorrect clock settings, as the unit takes care of ASRC automatically.

“In the past, I frequently had problems not so much with finding user-friendly systems able to handle such a large amount of signals, but finding users able to provide me with a laptop ready to run and the equipment configured: previously, I always used another brand, which I consider a top grade unit, but one is often limited by the routing and the amount of signal transport required to interconnect several units: having the possibility of processing 16 inputs and 16 outputs simultaneously in a single rack unit, which I configured in less than 5 minutes once Dashboard (Outline’s control software) was connected greatly streamlined by work.”

He continued: “Nowadays, it’s quite common to tour using in-house PAs, with a free-standing EQ or PA management system, to be completely independent when tuning a system. Newton is an extremely versatile unit, rapid and easy to use, and it’s versatility that wins in the long run.”

So, one of Newton’s strong points is routing, according to Linzi, something he’d never do without. “With the same computer connected via CAT5 for control, I can do quick L/R recordings forartistss directly via Dante Virtual Soundcard, without the settings made to the PA on the output. Then thanks to the EQ on the inputs, it is possible to carry out individual EQ settings for each engineer, without changing the basic tuning on the outputs.”

Linzi concluded: “Newton is definitely an excellent investment for whoever is looking for a product that is versatile, easy to use, technically advanced and ready to open up to hundreds of software upgrades that can only make it even more interesting. Newton has all it takes to redefine users’ workflow limits: nowadays, for an event, a festival or a show, what’s needed is the same concept of sharing as the social-web world: the greater the number of connective channels that can be set up in a network the more the message will be useable, and simplicity is the right way to do this.”