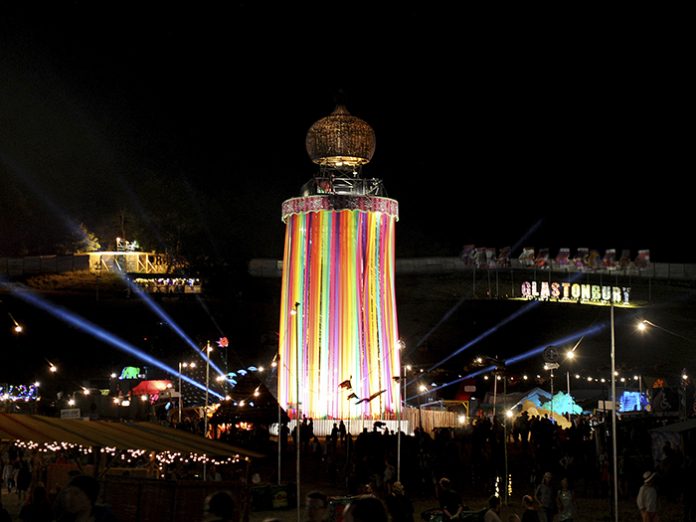 This year’s Glastonbury festival was “the best yet” according to organiser Emily Eavis. It was easy to see why a star studded procession of artists from Radiohead, Ed Sheeran and the Foo Fighters to The Sleaford Mods, The XX and Katy Perry appeared on its stages. Attracting attention was also the 20-metre high multicoloured Ribbon tower set against the brilliant light produced by ten Maverick MK1 Hybrids from Chauvet Professional.

Simon Marcus, MD at Enlightened Lighting specified the ten powerful 440W moving lights to celebrate the 10th anniversary of the tower and the park area that surrounds it. In addition to creating an aerial light show, the Maverick fixtures fit harmoniously with the tower uplights, and add drama and presence to the structure.

Installed in weatherproof domes, the MK1s were positioned in a line behind the tower, which festival goers were invited to climb to get a bird’s eye view of the festival grounds. David Howard, student at the University of South Wales and placement student of Enlightened, used the Maverick fixtures in both beam and spot modes to create a myriad of stunning effects.

“The power and versatility of the Mavericks allowed the tower to be a focal point of the entire site,” said Howard. “We switched seamlessly between beam looks and animated effects in the air with ease.”

Situated near areas like Arcadia, which were producing intense aerial effects of their own, the Ribbon tower needed to command attention whilst still projecting a welcoming feeling that was in keeping with the friendly atmosphere of the park. Howard drew on the Maverick’s CMY colour system and variable zoom range to create interesting and eye-catching looks that also conveyed an inviting sense of warmth.

“The Mavericks allowed bold and dramatic looks to be achieved in the sky, which were in keeping with the feel of the surrounding,” said Howard. “The feature set of the MK1s meant that no look had to be repeated in the entirety of the one hour timecoded display.”

During the five-day festival, the fixtures were put through their paces night after night on a relentless routine of stunningly vivid aerial effects. As a result, reliability and durability were of upmost importance in specifying the Maverick fixtures.

“It’s a testament to the quality of the fixtures that they performed without a hitch throughout the festival,” explained Howard. “Ultimately, the Maverick fixtures ensured that we could consistently draw attention to the Ribbon tower from all around the festival site. As a result, the tower attracted festival goers in their swathes. We’re so pleased to have contributed to the excellent atmosphere at this year’s festival.”