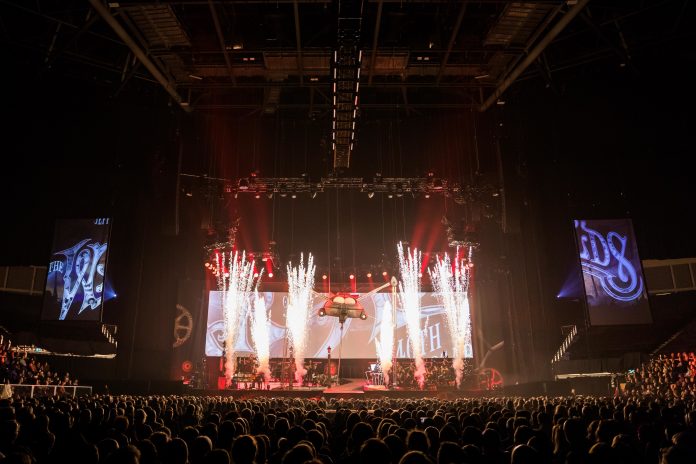 Celebrating its 40th-anniversary tour at the end of last year, Jeff Wayne’s Musical Version of The War of The Worlds showed it can still thrill.

The production is constructed around its 3-tonne 35ft tall Martian Fighting Machine, which fires real flames, against the backdrop of a captivating 100ft wide animation wall. And there are many other special effects besides.

From a musical perspective, the 36-piece ULLAdubULLA strings performed alongside the nine-piece Black Smoke Band (which included many musicians from the original tour in 2006). Now on its seventh tour of duty, the production has been played out on its last three outings through Martin Audio’s award-winning MLA PA.

In terms of production, the inordinate amount of inventory provided by sound, lighting, video, pyro and stage/motion control suppliers will have presented a logistical nightmare for production manager Steve Nolan and his team. Fortunately, sound rental company RG Jones has wide experience of this production, and FOH engineer Simon Honywill was on his fifth tour of duty, having first piloted the mix back in 2009.

Having again selected MLA as his PA of choice, Honywill was eager to extoll its unique virtues. “I wouldn’t do this show with any other PA,” he stated. “In fact, I couldn’t do the show. One of the crucial elements is the narration and if the intelligibility is compromised people complain, as it’s an iconic part of the production. On top of that MLA just sounds awesome.”

Some arenas seem determined to challenge this, often arced with glazed VIP boxes at the horseshoe end. Honywill acknowledges that this will generate unwanted reflections. “With music, you can often get away with it but it would destroy the intelligibility of the narration [with a conventional PA]. Fortunately, we can mitigate it by using the ‘Hard Avoid’ setting [in the Martin Audio Display software].

“In Nottingham Arena, for instance, it made a massive difference and enabled us to focus the acoustic energy very effectively and reduce unwanted reflections for a large portion of the audience. It’s an absolutely invaluable technology.” Liverpool Echo was another venue where system engineer Steve Carr, assisted by Matt Sussex, needed to ‘Hard Avoid’ the concrete wall which runs around the arena between the lower and upper seating tiers.

The design of the Martin Audio system had been slightly modified from the 2014 production—minor changes to the front fills, a bit more ordnance in the PA dept, and the fact that the hangs were pushed further upstage to preserve sightlines meant that bespoke measurements had to be undertaken to ensure the accuracy of the optimisation.

At the 20,000-plus capacity venues, production fielded 20 MLA elements per side, with 16 MLA Compact providing outfills. To compensate for the slightly odd position of the main hangs, eight MLA Mini elements on each stage wing were focused at the front to keep the energy level off the stage, driven by Martin Audio multi-channel iKON amplifiers, which provided an elegant solution. Martin Audio DD12s covered the extremities of stage left and right front rows to maintain coverage consistency, while under the stage and at the base of the thrust were 16 MLX subs in a spaced arc array.

Towards the rear of the auditorium, there were two surround positions, each comprising eight W8LM Mini line arrays each side.

Simon Honywill was piloting his mix on a DiGiCo SD7 with Fader Expansion. With three fully loaded 56-input racks his input count is 168 channels. As well as the band and 36 piece string section occupying the majority of two SD racks, the high input count was made up from surrounding FX, playback and the six guest artists, each wearing a main and spare RF pack. The playback machines also generated time-code, which played a crucial part in enabling both Simon Honywill and monitor engineer Becky Pell to mix the complex soundscape, while Nathan Kennedy supervised RF and radio mics.

But the quality of the narration meant it was never fighting through the context of a loud rock theatre show. That every word was crystal clear was due to MLA, and Steve Carr’s programming expertise.

Because the PA was unusually set 2.5 metres upstage of the downstage edge, precision with optimisation was vital. “If I were to apply an existing measurement incorrectly, I could end up covering the front edge of the stage with PA. So I have arrived at each venue well ahead of the crew, and there have been a lot of benefits to that.

“The vital thing is that the whole stage is pre-rigged on the arena floor and once the lighting rig goes up and the whole monitor riser wheels into position. I’ll generate my optimisation file for EQ and angles, load it into VU-NET [Martin Audio’s control software], and tune and time align each array.”

“There have been times when I’ve done optimisations in the morning and then production have said ‘we need to trim the PA 50cm higher’ and I’ve needed to reoptimise it.” Martin Audio, therefore, has to be adaptable.

Honywill concluded: “It was the first time I had done NEC in a long time and I’d forgotten how good it could be. MLA sounded amazing … every little nuance, pan and grace note were there, everywhere.”