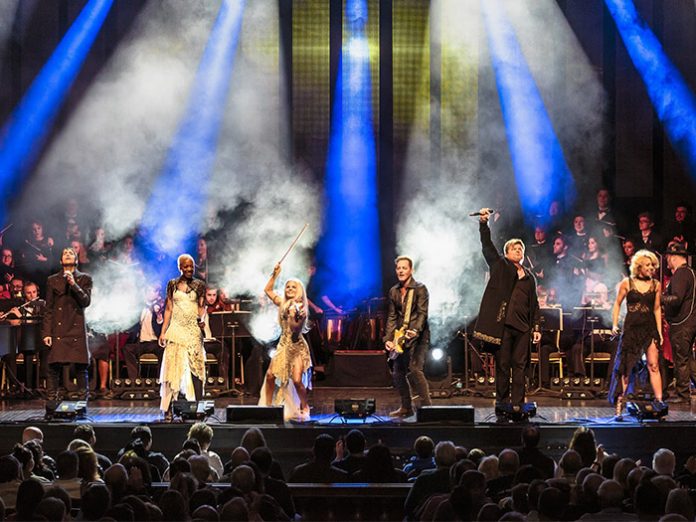 Heralded for its superb acoustics, which are said to rival those of La Scala in Milan, the Hungarian State Opera House has hosted many of the greatest artists from the orchestral and operatic worlds. Gustave Mahler called this building home as the opera’s director, as did Otto Klemperer. At no time in this Budapest landmark’s history, though, did it ever ring with sounds quite like those created in Rocktopia, a wildly original mash up of classical and classic rock music.

After making its global debut last year at the opera house in a PBS broadcast, Rocktopia is now bringing its far-ranging musical mix to the US with a tour of mid-sized venues. Supporting this eclectic concert is a lightshow created by Michael Stiller of upLight. Stiller’s design  remains true to the flavour of that PBS special, while still being portable and road friendly, thanks to some help from a collection of Chauvet Professional fixtures, supplied by Squeek Lights.

Rocktopia adds violins, horns and operatic choruses to songs like Queen’s We Are the Champions at one point, then proceeds to turn up the temperature on compositions by Beethoven, Handel and Mozart with hard-driving rock riffs, before adding orchestral flourishes to Pink Floyd’s On the Turning Away. Stiller’s design keeps pace with the show’s wild musical turns, all while keeping a consistent look with the PBS concert, which is no small feat, considering how much larger the TV special rig was than his touring package.

“If you can imagine mashing Stravinsky’s Rite of Spring with Hendrix’s Purple Haze, you get an idea of what Rocktopia is all about,” said Stiller. “This is at the heart of my design; I want to reflect the energy that you generate when you get these very different musical influences to work together.”

Although this common vision infuses Stiller’s design, going from the rig at the opera house to a smaller touring rig required some adjustments. For example, he had back washes on all the orchestra and band members for the TV special, but did away with that for the tour. He also eliminated all the white lights that were needed for TV.

Compactness and cost control were also priorities for Stiller when putting together the Rocktopia touring rig. “We had 10 systems of scenographic rock and roll lighting for the TV concert, and I boiled this down to six,” he said. “We had 18 bigger and heavier moving wash lights that I replaced unit for unit with Rogue R2 Washes.”

Stiller positions his 18 Rogue R2 Wash fixtures on three electrics, flying six on each to create a grid array over the performers. “This grid arrangement makes a powerful statement,” he said. “It’s very visible and it allows me to create a wide variety of looks, which is obviously important given the range of music performed in this show. I also use the Rogue washes in the grid for stage lighting. The Rogues do a lot of different things and they’re compact, so they save a lot of trailer space.”

Another space saving step that Stiller took with his touring rig was to use the Rogue RH1 Hybrid fixture in place of the larger spots and beams on the TV special rig. Aside from doing double duty, the RH1 fixture allows him to create a wider range of effects. He also replaced the high and low arc lights from the TV special with eight Maverick MK Spot fixtures, arranging four in each position.

For eye candy, Stiller places four Rogue R1 FX-B fixtures on the deck, locating them next to the four Maverick MK2 Spot units he has in that position. “We replaced some moving wash fixtures with the FX-Bs,” he said. “Aside from the cost and space advantage they offer, the FX-Bs create a totally different kind of eye candy with a lot of variations in movement. For example, I really like how we can use them for wave tickles when we do Come Sail Away.”

Stiller, who pre-programed the lightshow at a pre-visualisation in his New York City studio and time coded it on sync track, believes that special looks such as the FX-B’s wave tickles are critical to conveying the spirit of Rocktopia. “I have worked with the co-creators of the show, RandyFleischer, William Franzblau and Rob Evan, for a number of years, and their enthusiasm for this project is contagious,” he said. “Greg Bloxham, our original programmer in Budapest, contributed a good foundation for this design. Victor Zeiser and the crew from Squeek Lights have been a very big help. Now that we’re on tour, our rig may be different, but the heart of the show is unchanged.”