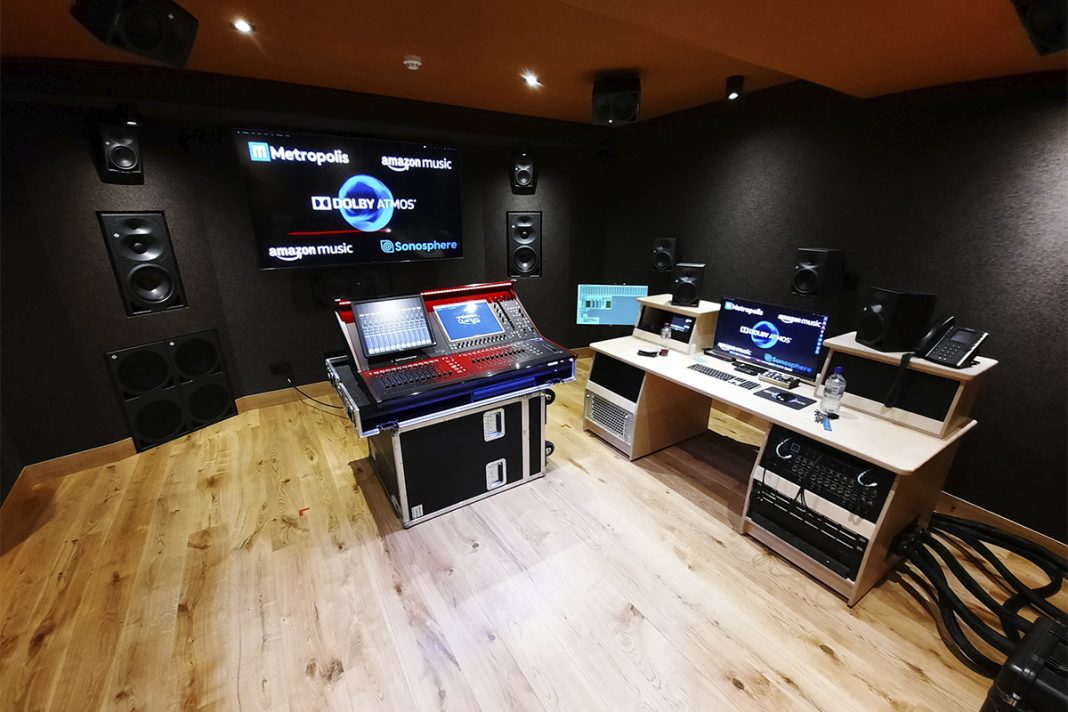 With immersive audio in higher demand than ever, from streamed events to in-person performances, there has been an overwhelming need for spaces in which engineers can work on mixes. Well aware of the demand for such a facility, Sonosphere, in conjunction with Metropolis Studios, has done just that – creating a state-of-the-art facility at the Chiswick Power House, London.

With Sonosphere’s experience in immersive audio and livestreaming, the team were more than aware of the capabilities such a facility would need. Starting life as a room for podcasting and immersive content creation, the concept snowballed as Sonosphere realised they could create a space that could be utilised for a whole range of applications – from realtime immersive mixing of livestreams, to pre-programming an immersive mix before setting out on a live show.

“In terms of the music market, Dolby Atmos is the standard. So, we decided to ‘have our cake and eat it’ and build a room to fully meet the Atmos specifications,” stated Sonosphere Commercial Director, Jamie Gosney following the launch of the new space.

Now open for business, the studio, which is Dolby certified and boasts an immersive monitoring environment capable of 11.1.8 Dolby Atmos, is currently the highest Dolby resolution studio in the country. Greeting TPi in this immersive audio wonderland was Sonosphere’s Senior Mix Engineer, Phil Wright and Metropolis’ Brand Director, Gavin Newman. “We explicitly wanted this room to be as versatile as possible in order to accommodate as many different workflows as possible,” began Wright. This need to be flexible is something that Wright believes is a necessity as the demand for immersive solutions increases. The studio can accommodate all possible formats and incoming mixing consoles and caters for several interface formats including MADI, Dante, AES3 and Ravenna. “Just the other day for a show we had a DiGiCo brought in and we were up and running with it in no time at all,” enthused Wright.

Any incoming engineer who sits in the central control position will find themselves surrounded by a range of Neumann speakers with three KH 420 tri-amplified monitors mounted to the front wall with a further KH 420 underneath the reference screen. Twin Neumann KH 870 subwoofers flank the three-way monitors, with low-frequency response down to 18Hz. Wright continued to explain why the team had decided to go for Dolby Atmos as the system of choice and the advantages it could bring to the live event market. “While building this studio space I have two colleges each working on various live immersive audio projects that use manufacturers’ own software,” he explained. “The issue they and many others have come across is that they are unable to get specific hardware in certain territories. It’s left them in a bit of a quandary, and they may have to go back to the drawing board. One of the main advantages of Atmos is that it’s completely loudspeaker agnostic.”

Although there are several other systems out there that can also work on other speakers, Wright explained that he sees Atmos as a better choice due to the current “blurring of boundaries” between live and studio work for audio engineers. “So many people these days work between live and studio and you find you can use the same plug-ins, architecture and series to process all the immersive audio.” He continued to complement the workflow of Dolby Atmos, which, unlike some of its competitors, gives engineers object control within an XYZ plane, giving full spatial control of the mix. Another feature that he found incredibly user friendly was the inbuilt sequencer, which resembles an “old-school drum machine”, which enables users to pre-set various movements, taking its tempo from the incoming timecode. “It’s a feature that artists and engineers working within EDM will find practically appealing for elements of a track such as high hats or shakers where you can do some really impressive sweeps to add to the overall feel of the track,” enthused Wright.

Following a demo in which Wright showcased the immersive capabilities of the studio including an exclusive preview of an upcoming Jack Savoretti Amazon Original, both Wright and Newman discussed how they foresaw the studio being utilised by the artist in the coming months. “Just the other day when we had Jack performing in the live room, we could then bring him into the studio and in real time, with no post, show what could be achieved with Dolby Atmos. They were completely blown away,” enthused Newman. “At Metropolis, we’re always keeping an eye on new technologies, which led us to have a conversation with Sonosphere Commercial Director, Jamie Gosney.” The ability for the set up at Metropolis to be turned to the streaming world has already garnered the attention of several supporters – most notably Amazon Music as well as Mastercard, who have also hosted live sessions from the studio in recent months. This level of corporate interest shows how streaming incentives such as this could provide yet another viable revenue stream for the music industry.

“In my mind, the offering and a wider use of immersive mixing using Atmos is a paradigm shift in recording sound,” stated Wright. “It’s bigger than the change from mono to stereo. With Atmos, instead of having to employ tricks to make you think you’re experiencing ‘space’ in a mix, you are actually giving the mix ‘space’. This means you can mix much more dynamically with much less compression.”