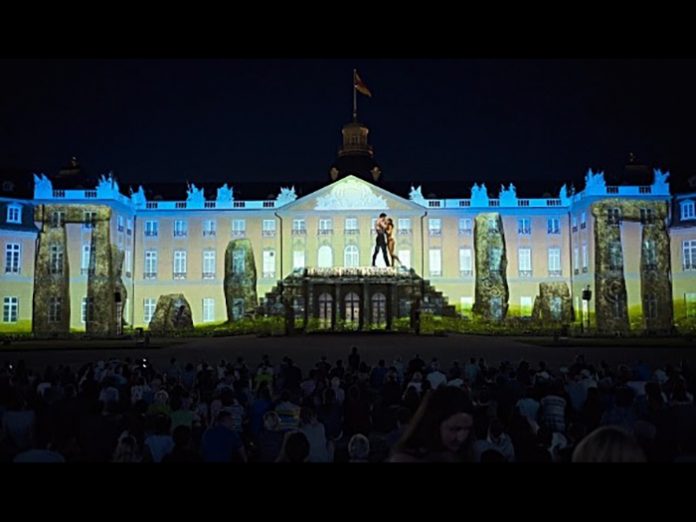 Maxin10sity, the Hungarian award-winning and record-breaking projection mapping specialist, is now famed for its work in the German city of Karlsruhe.

Engaged in 2015 to deliver the Schlosslichtspiele (light projection on the palace façade) to mark the city’s 300th anniversary by the Karlsruhe Centre for Art and Media (ZKM), Maxin10sity has returned every year since thanks to the year on year success of its shows. Always keen to raise the bar, 2018’s spectacle – entitled I’MMORTAL (Immortal / I am mortal) – went one step further combining Maxin10sity’s trademark projection mapping with acrobatic acts to create a brand new visual genre and wow the crowds.

Maxin10sity co-founder and creative director, András Sass, took the lead on the project and reflects on the early conceptual stage: “This was our fourth year devising the Karlsruhe Schlosslichtspiele show, and we wanted to stretch ourselves – by testing a new creative direction where we would introduce characters but stay true to our projection mapping roots. By using acrobats for the first time in the context of a projection mapping production, we wanted to create an entirely different spectacle whereby the acrobats’ choreography and the animation unfold together to tell a story.”

ZKM’s Nina Wlodarczyk project manages the Schlosslichtspiele, and has worked with Maxin10sity over the past 4 editions. “The close collaboration in 2015 between our curator, Peter Weibel, and Maxin10sity took the art of projection mapping to new heights. It set the tone for our continued relationship, with Maxin10sity subsequently taking more of a lead on the script and execution in 2016 and 2017.

“Our artistic and technological goals are ambitious – the challenge is for the content to maximise the form and three-dimensionality of the castle, creating a truly unique experience that can only be seen here in Karlsruhe, whilst technically it should satisfy the connoisseur as well as the general public.”

This year’s new approach, believed to be a world first, certainly impressed the audience – with over 350,000 visitors watching almost 80 performances over a 6-week duration. It all began with a conversation after the 2017 show, when Sass put forward the idea of incorporating acrobats as actors in the architectural mapping.

The idea struck the right tone and Maxin10sity was given the creative freedom to pursue it. “Our previous shows in Karlsruhe (300 Fragments in 2015, Legacy in 2016 and Structures of Life in 2017) all had a strong point of reference back to the city, but this year, we chose to open it up a bit more and take on a more philosophical theme. We started to explore what it might mean to live forever and what there might be after death. The topic was of great interest to me, and inspired by my love of Anne Rice’s books which for those who know them, touch on themes around eternal life,” recalls Sass on how the story for I’MMORTAL emerged.

The main protagonist of the resulting story is Asheem, who is searching for the meaning of immortality following a tragic accident which gives him the opportunity to experience the grace of infinite time. During his trip he travels a huge distance in space and time and takes the way to heaven and hell, as the show invites the spectator to question where these routes really lead to, and whether immortality is indeed a part of all of us.

Maxin10sity engaged the acrobats of the Recirquel Company from Budapest, Hungary – an outfit which has enjoyed considerable success and critical acclaim having toured the world and performed in its most prestigious venues since it was founded six years ago.

Sass elaborates on the creative process which translated this story into a visual spectacular, with acrobatic elements from the contemporary circus repertoire and mapping complement each other to create a new visual genre: “I have always been fascinated by acrobatics, and especially so since the genre began to blend with theatre a couple of years ago to deliver breath-taking productions with even higher quality artistic values. My aim was to create a new kind of genre fusion.

“Initially, the concept and basic storyline were written, before testing with different age groups and in different venues took place. We then moved on to creating the music, working hand in hand with the acrobats and choreographers at that time.”

Flaviu Ciocan and Márton Horváth, lead composers at Big Total Audio, returned to work with Maxin10sity for this year’s performance, creating the all-important original musical score to which the stunning visuals are set.

Of the duo, Sass said: “We have developed a common language have worked together now for many years, and they intrinsically understand what feelings we want to summon with the music. Having free reign is, of course, a blessing but can also bring challenges for both us and our composers – but Flaviu and Márton have always more than delivered each time.”

With the music set, the choreography was also finalized and the acrobats were filmed in a 2-day shoot, using green box technology to put the characters into the digital environment. Rather than costumes, the acrobats were painted using a fine body painting technique, in order to fully show off the movements in their bodies to help tell the story.

These recordings were combined with the 3D animations produced in Maxin10sity’s studio to create the final visuals. The show itself was delivered via 16 Panasonic 20K laser phosphor projectors and a Pandoras Box system.

Such is the success and popularity of all Maxin10sity’s Karlsruhe performances that 300 Fragments, Legacy and Structures of Life were re-run alongside I’MMORTAL during the 2018 edition of the Schlosslichtspiele. A Maxin10sity weekend also took place, with the shows running exclusively from Friday to Sunday alongside a team Q&A discussion with the audience, which attracted one of the highest attendances of the whole event.

Sebastian Schneider of Karlsruhe Marketing und Event (KME), who is responsible for the infrastructure, administration and event planning around the Schlosslichtspiele and briefed its curation in to ZKM, reflects on another successful year: “Our original intention was to create an easily accessible experience for citizens and visitors which would showcase the city’s pioneering role in media, art and technology.

“Projection mapping is central to this and not only makes the castle façade light up, but it brings it and our city to life. Maxin10sity once again brought together the three key elements of a successful projection – an immersive storyline, interplay with the architecture and spectacular sound. Spectators were enthralled by this new kind of storytelling and we know they will be back next year to find out what Maxin10sity is going to do next!”

ZKM’s Wlodarczyk added: “Maxin10sity’s shows have become a much-loved and anticipated spectator favourite at Karlsruhe. With ownership over the curation of the event, we look to Maxin10sity to help us code the show in a post-modern way so that there is something in it for everyone. Each year they go above and beyond to address and overcome the challenges, reaching new heights of visual artistry.”

Sass concluded: “It’s a creatives’ dream to work on a project like Karlsruhe every year, where we have the freedom to push the boundaries, challenge storytelling norms and create an entirely new visual genre as we did with I’MMORTAL. Using acrobats to tell a story on the façade of a building for the first time is a clear example of how we never stop innovating to create truly unique content.

“We are thankful to ZKM and KME for their continued trust in us, and to the people of Karlsruhe and visitors to the city during the Schlosslichtspiele these last four years, for embracing our ambitious performances as part of an event which grips the whole city. We can’t wait to return bigger and better next year.”