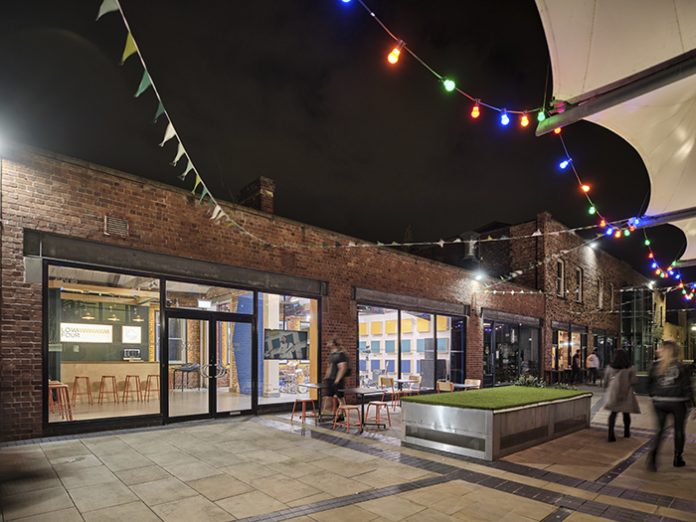 Online music TV platform Low Four is launching a new recording studio and venue on Deansgate Mews at Great Northern Warehouse, with a bar from Cloudwater.

The studio has released a preview session with Francis Lung, recorded this summer, featuring six tracks from his second album ‘Miracle’ released by Memphis Industries earlier this year.

Low Four will officially open on Thursday 16 September with a live streamed show from Manchester electro-punk-rockers W.H.Lung (no relation). As for many of the intimate shows at the studio, tickets will be given away for free via socials.

Originally launched in 2016, Low Four’s first home was the old recording and dubbing suite at the old Granada Studios site on Quay St until redevelopment began. On Deansgate Mews, they will be joining a growing community of new artisan businesses that include Holy Grain Bakery, The Butcher’s Quarter, Dormouse Chocolate, Three Hands Deli and Another Hand Restaurant.

Low Four co-founder Dan Parrott reflected: “It was frustrating not to be able to operate during the pandemic, the landscape since our last broadcast has changed drastically but we hope the new Low Four offers the best of both worlds; great music with great production values, in-person and on-line, all at the same time. We were really fortunate to come across the right building, at the right time and to be part of something really exciting happening along Deansgate Mews.”

Using the new recording studio and venue, the team will be collaborating with a wide range of grassroots and established promoters and organisations to produce programming that reflects the depth and diversity of local talent, covering a full range of styles and genres.

Previously, Low Four has worked with a vast array of acts, including live streaming performances from the likes of Everything Everything, Alexis Taylor, This is the Kit, Mew and Poliça; recorded albums for GoGo Penguin, Dutch Uncles and Francis Lung, and collaborated with organisations from the Hallé Orchestra to Manchester Science Festival.

The studio will resume its talent development scheme which includes free studio and production development time awarded to Manchester’s most promising artists.

Alongside musical talent, the project will also nurture technical skills, most notably through its partnership with the University of Salford, functioning as a teaching and research hub. This includes an online music industry conference to debut in November.

Cloudwater will be supplying the beer for the live shows as well as collaborating on content that will support emerging local talent. Cloudwater’s Hospitality Development Manager, Jimi Pearce said: “It’s great to see Low Four find a new home and for Cloudwater to be part of their story. To work with a studio is a new experience for us, and compliments our own weekly live-stream events. This is an exciting opportunity for us to collaborate and support new music and culture in Manchester.“

Associate Dean; Engagement & Enterprise, Sam Ingleson said: “Having worked with Low Four over a number of years, the School of Arts, Media and Creative Technology are really pleased to formalise the educational partnership and I know our students are looking forward to getting over to the Great Northern to work with the amazing artists they have coming through.”

Low Four is also supported by the Greater Manchester Combined Authority. Marie-Clare Daly, (Principal, Culture and Creative) said: “We look forward to working with Low Four in supporting the music sector in Greater Manchester through a very challenging time and hope that we can work together, in placing culture at the heart of civic and economic recovery for years to come.”