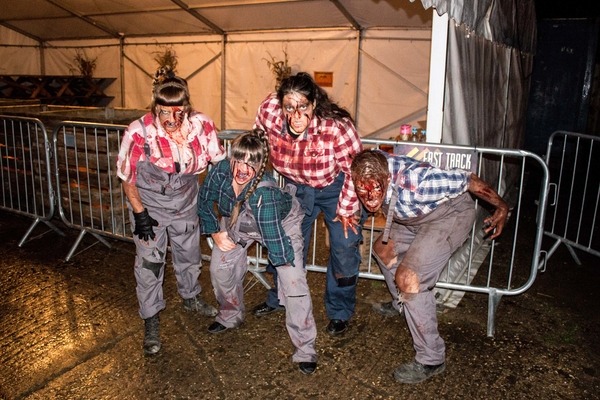 The Howl Scream Park made its annual return to Mead Open Farm for 13 nights of terror in October 2017. Behind them, a team of experienced engineers, technicians and designers, who specialise in creating innovative Halloween attractions supplied by Leisuretec.

The Howl, Toppers Twister, The Shed, Hotel de Basquervilles, Squealers Yard and the House of Hounds were among the haunted areas of the park. In each maze you could expect to encounter impressive audio, lighting and special effects, along with a legion of terrifying actors, which combined to create an immersive experience where you were the bait. While Chauvet Professional hurricane smoke machines pushed thick clouds of haze and fog into the mazes.

“We chose Crown amplifiers because of their high quality build, immense power and renowned longevity. This meant we could rely on the amplifiers to produce clear, crisp and consistent audio throughout the event,” said Duncan, Funfear’s head Twisted Tech.

The puppet show outside in the courtyard, was powered by a PA system consisting of Mackie Thump 1000’s and 4 Sennheiser XS Wireless systems. Each maze featured an emergency stop system that changes the lighting and audio instantly to allow for a quick and easy exit.

“We use Leisuretec because they’re right on our doorstep and they always answer the phone with a friendly attitude. The team have excellent technical knowledge, so if the product we want isn’t in stock they’re always able to suggest alternatives,” Duncan concluded.