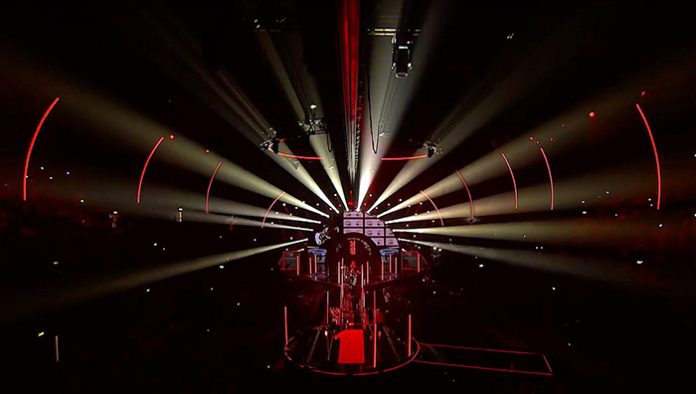 The BBC Radio 1 Teen Awards, held at the SSE Wembley Arena, fronted by Greg James, Mollie King and Maya Jama, featured a host of acts including Little Mix, 5 Seconds of Summer and Sigrid.

Working alongside Gaffer Richard Gorrod and PRG, LED Creative assisted in building the vast ‘neon’ archways and circular truss system that spanned the areas above both the stage and the audience. The installation allowed the team to create a truly immersive viewing experience that extended beyond the main performance stage to fill the entire venue with a spectacular array of shape and movement.

LED Creative also provided a range of proprietary products, including the company’s Pulse Wands and Sigma Fairground fixtures paired with BYTE Controllers, which the LD and LED Gaffer Craig Davis incorporated into performances from 5SOS and Not3s & Mabel. The 2m Pulse wands allowed intense bursts of colour, perfectly choreographed to match Lighting Op Chris Scott’s dazzling display on stage and out into the arena.

Speaking about the show, LD Stuart Pring said: “The equipment supplied by LED Creative for the BBC Radio 1 Teen Awards allowed us the flexibility to build a stunning installation for the show. In particular, the arches created above the performance areas and across the audience allowed us to extend the visuals beyond the confines of the stage right throughout the venue.”

LED Creative Project Manager Tim Rees concluded: “The crew delivered a spectacular setting for the Teen Awards live show. Along with some stunning stage designs the installation took in the entire venue encompassing both the performers and audience. It’s been a pleasure supporting Stuart and the team on this project”.