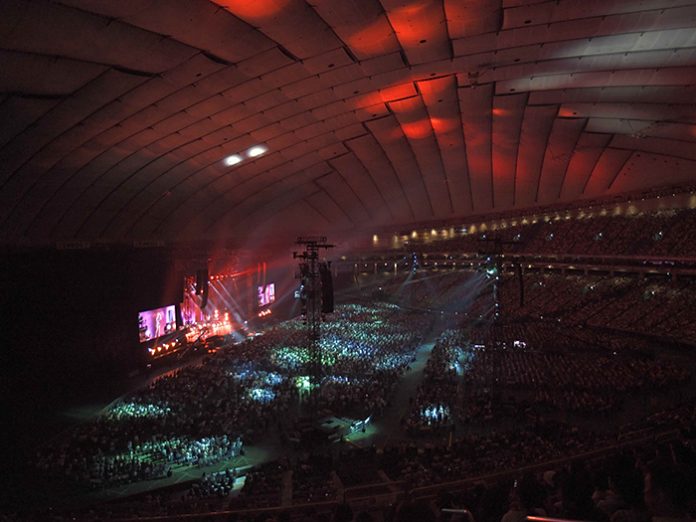 The logistical feat of picking up each system locally was accomplished seamlessly by Céline Dion’s long-time audio provider, Solotech, achieving consistent sound across the venues on a 22-date marathon thanks to L-Acoustics’ K1 and K2, its international network of suppliers.

“We needed a loudspeaker system that would be available at every venue on the tour,” says Francois Desjardins, VP R&D, Technological Solutions at Solotech, an L-Acoustics KX Standard Certified Provider. “This was the first time we’d used L-Acoustics on a Céline Dion tour, but we’d been looking at it for a while and we were confident that we would get the consistency of sound we wanted. Not only were we right, but the support we got from the L-Acoustics suppliers along the way was amazing.”

Fourteen suppliers, including Hibino, Winly, Forscink, Mata Elang, Jack Sound and Norwest, were employed over the two-month tour across major venues—Tokyo Dome, Jakarta’s Sentul International Convention Center, Taipei Arena, Mall of Asia Arena in Manilla, Impact Arena Bangkok and the Spark Arena in Auckland—all with varying requirements. Much of the venue information was supplied by Alvin Koh, L-Acoustics Head of Application for Asia, drawing from the extensive L-Acoustics library of venue plans. Desjardins and Jon Trudeau were able to model each system in L-Acoustics’ Soundvision software ahead of time, addressing the challenges specific to each venue.

“System engineer Jonathan Trudeau was in direct contact with each provider so we could talk to them about how the system was to be set up, and they were able to check that everything was working properly,” explained Desjardins. “We did this for every venue and using Soundvision made it very easy. The software is quite straightforward: you simply input the loudspeakers and it gives you a result. This means you always have a consistent starting point, then it’s just a matter of taste when you’re tuning the system. For everything else, I just followed the guidelines. With other software we use, the results are not always as good. With Soundvision, I always achieve the result I was looking for.”

The 40,000-plus capacity, domed Tokyo Arena required the tour’s largest system which comprised two hangs of 16 K1 with four K2 and a centre hang of four K2; two hangs of 20 K2 for side fill; two hangs of delays of 16 K2 each and two of 14 K2. A dozen Kara provided front fill, and two ARCS Wide were positioned left and right on the stage lip for outfill. Low frequency was handled by 12 K1-SB, flown behind the K1 hangs, and 40 SB28 floor subs positioned in front of the stage. Delay subs were four stacks of three SB28.

Despite the size and complexity of the Tokyo Arena, with local audio solution company Hibino supplying and loading in the system, Desjardins and his team had an unexpectedly easy time.

“Hibino did the most fantastic job in turning our paper dream into a reality,” he says. “The Tokyo show was really complex for many reasons, and the fact that the live show was being filmed and that we couldn’t get into the venue until midnight, the night prior of the show day, added to the fun. This meant the stage had to be set up, the delay towers had to be installed and the entire system rigged in time for the show to start at 6pm. Not only did Hibino do it, but they also did it in an amazing timescale. In fact, they were already three hours ahead of schedule when we arrived. It was incredible, and the atmosphere was really relaxed. We felt that we had achieved something really special; the entire audience had great sound and the feeling that Céline had on stage was really good.”

Desjardins declares that he is happy with the uniformity of the systems from country to country and with the support he has received. He reports that Denis Savage, FOH mixer, was pleased with the end result as well.

“It’s good work in training and education from L-Acoustics in Asia,” he stated. “It’s important that the L-Acoustics family is tight and consistent as you move from country to country and nothing unnecessary is added to the system. The support we’ve had from the first time we discussed things with L-Acoustics in Paris and LA, as well as with Alvin in Asia and the local suppliers has been amazing.

“I have been working with Céline for 26 years, have faced many challenges and have received great support along the way and L-Acoustics more than lived up to our expectations. I was really pleased the system translated well from paper to reality. From the beginning to the end, it was a positive adventure. I would love to do it again.”