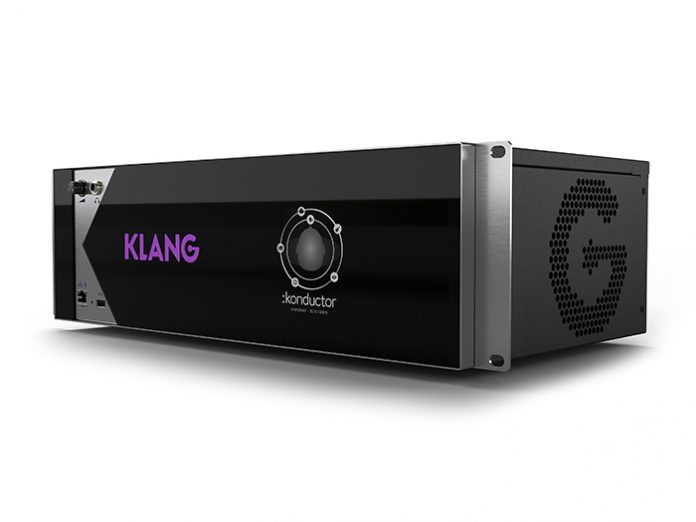 “After joining forces with DiGiCo in 2018 and the release of the workflow integration for its consoles, more and more monitor engineers have implemented a KLANG immersive IEM processor into their workflows,” said KLANG Co-Founder, Dr. Pascal Dietrich, discussing the idea behind the creation of KLANG:konductor. “Only the most critical channels for the main artists were sent through the processor but the wish for more input channels and creative and organisational possibilities grew further.”

Designed with monitor engineers and fixed installations in mind, KLANG:konductor boasts a mixing system that can deliver 16 immersive mixes and process 128 input signals at up to 96kHz, with an astonishing processing latency of less than 0.25ms.

“Our combined R&D teams were able to squeeze in twice as much processing power in a single 3RU device as found in any of our previous processors by using the latest, super-fast FPGA cores,” KLANG CTO, Benedikt Krechel explained. “Many of our customers value the I/O flexibility that our first KLANG:fabrik offers, but we know they need to quickly adapt to different I/O situations when touring different countries. KLANG:konductor considerably extends this flexibility and lets the user choose I/O on the fly.”

KLANG:konductor offers three DMI slots on its rear to provide I/O freedom and integration into any existing setup. For example, two DMI-MADI cards allow 128 input channels and mixes to be returned to a console and one DMI-Dante card can connect the mixes to KLANG:kontrollers. Paired with integral single channel routing capabilities, it also allows the user to freely route between the immersive mix engine and convert between different DMI formats, such as Optocore, Dante or MADI, with each DMI card offering up to 64 input and output channels at both 48kHz and 96kHz.

Integration with DiGiCo’s control interface and the KLANG:app provide engineers direct control with KLANG:kontroller allowing musicians to control their own mix.

“KLANG:konductor is the swiss army knife of audio format conversion and becomes very handy as an interface for virtual sound checks or multitrack recordings, at the same time as being used as an immersive processor,” explained Dietrich. KLANG:konductor offers the same studio grade amplifier circuit as KLANG:quelle on the front of the device. The device also has a front mounted seven-inch colour touch display to allow for direct mix control, audio setup, routing and monitoring metres. A network port on the front of the unit provides power over ethernet to directly connect a KLANG:kontroller or KLANG:quelle and dual redundant power supplies offer maximum reliability.

“Immersive in-ear mixing has become increasingly popular, having proven to deliver crucial benefits to musicians by providing a natural listening experience and removing the feeling of isolation on stage,” summarised Dietrich. “KLANG:konductor is our most powerful and most flexible processor so far, and gives both engineers and musicians an immensely powerful, yet simple to use system, that delivers all those benefits and more.”