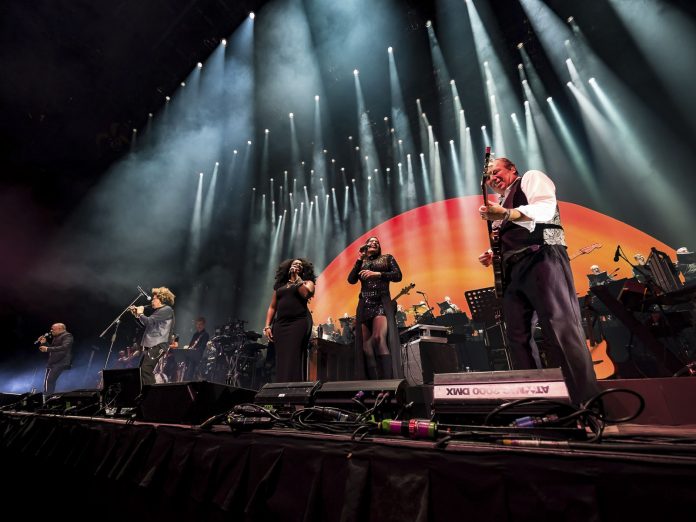 Since the 1980s, Hans Zimmer has composed music for over 150 films including The Lion King, for which he won Academy Award for Best Original Score in 1995, the Pirates of the Caribbean series, The Thin Red Line, Gladiator, The Last Samurai, The Dark Knight Trilogy, Inception, and Interstellar.

FOH engineer Colin Pink has worked with Hans for three years with this tour starting in April, firstly doing some dates on the West Coast of the States, before coming to New Zealand and Australia for five shows. The tour then heads off to Europe for twenty-six shows before returning to the States for another twenty-five shows finishing on the 18th August.

Nathaniel Kunkel is the Sound Designer for the tour and being based in L.A, Pink said he was the right person to do all the pre-production creation and programming for the show.

“Being more of a studio based engineer, he had the ability to refine the detail of the show before we got into rehearsals,” commented Pink. “Once I came on board for rehearsals and the tour itself, we worked very well together using my skills in the live sector, to adapt our work into a touring format.”

The show is a massive challenge from an audio point of view. There is a core band of twenty-two people, including six keyboard players who all double on other instruments. On top of this there is a choir of sixteen and an ‘orchestra section’ consisting of twelve string players and nine brass players. The total input channel count is 260 and there are 63 monitor mixes.

“To control all of this we have a Digico SD7 at FOH and monitors, plus an SD11 to sub mix the orchestra and choir,” explained Pink. “The main reason for choosing the Digico consoles was their high channel count coupled with their flexibility and ability to ‘copy audio’ over the fibre optic network. Even with the high channel count of the SD7, I was creating ‘stems’ of the playback and certain sections for Gavin Tempany at monitors, since he could not take all the inputs directly as he had a reduced input count due to his high number of monitor outputs.”

As far as outboard and effects went, Pink has tried to keep it as simple as possible. At FOH he has a t.c. Electronic M6000 doing vocal reverbs and uses an internal Tap Delay and some of the internal ‘Audio Enhancers’ inserted across the keyboards and electric cello. Although the show is quite FX heavy most of these are taken care of by the keyboard on stage and some by the playback rig. The show is performed with a full surround rig and a lot of the FX are presented in a surround format.

“I think one of the most difficult – and interesting – parts of mixing for Hans is the way he uses many layers of sound to create interesting textures,” remarked Pink. “There are often thirty or so layers of keyboard tracks which combine to make a fluid texture. In the live environment it’s very hard to achieve the right balance between the component parts and keep track of who is doing which bit!”

Pink stated that P.A systems had been very interesting on the tour so far, and for the first few venues he used ‘in house’ systems.

“We started at The Microsoft Theatre in L.A and used their JBL Vertec System,” he said. “Our second show was at the Coachella Festival on their L-Acoustics K1 system. Next stop was San Francisco using the new Clair CO12 system. Then we have a K2 system in Vegas and a D&B J Series system in Auckland!”

Once the tour reached Australia JPJ Audio provided their Clair CO12 system for the entire Australian tour and this system will also be used in Europe.

“It’s been great to have a few systems on the tour as a means of comparing them,” added Pink. “With the CO12 we ended up with 16 x CO12 a side as the main hangs, and 12 x CO12 as side hangs. As the content of this show has a very extended low end, we flew 6 x subs per side next to the main hangs and had another 12 x subs across the front of the stage. This gave us a very smooth coverage and plenty of headroom. Added to this we have a full surround system, it is soundtracks after all!”

The mic setup was fairly standard, although on a large scale. All the strings had ‘clip on’ DPA’s and the rest of the orchestra and band had standard microphones. The important part of the mics on stage was that there were no wedges (with everyone on IEM’s) or guitar cabs. All the guitars are being run through ‘Kemper’ emulators, so the only spill into the orchestral mics was from the drum kit, which is heavily screened. This allowed Pink a lot more control over the mix

“JPJ looked after us for the whole of the Australian leg of the tour,” Pink said. “Their service was second to none. The efficiency of the JPJ Sydney crew of Joel and Alex meant I never had to wait for any part of the PA ahead of sound checks.”