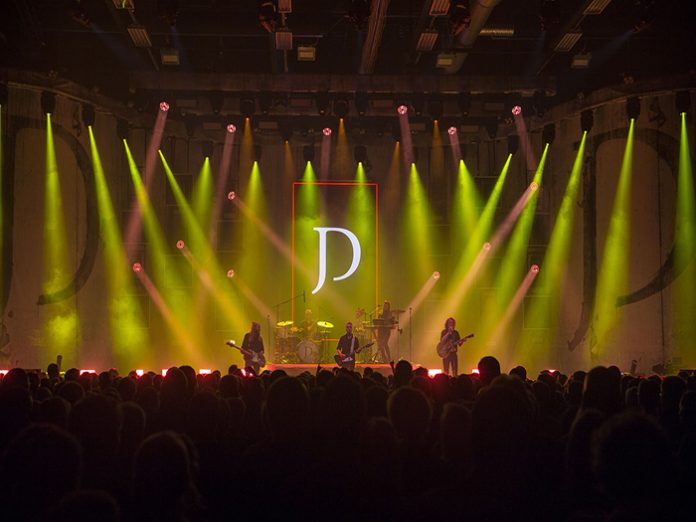 Danish singer, guitarist and chart-topping rising star Jacob Dinesen played 2 spectacular arena shows to kick off his 2018 summer tour, 1 in his home region of Aabenraa and 1 in Copenhagen, with Robe MegaPointes and Spiiders prominent on the rig.

Lighting for these 2 shows was a completely new design, also programmed and operated by LD Niller Bjerrgaard.

Niller had only just joined the Dinesen production team for these shows after being recommended by FOH Engineer Mads Mikkelsen – the 2 also work for high profile DK heavy metal heroes Volbeat.

“I wanted the style and feel of the show to be a bit raw and improvisational, so I constructed the lightshow using a combination of cue lists and live busking pages which enabled me to combine the 2 MOs,” explained Niller.

Some of the 30 Robe MegaPointes and 20 Robe Spiiders at the centre of the rig were actually already specified by Jacob Beckman, however, when Niller took over the project, he added some extra fixtures and was very happy to work with both of these Robe products for the first time!

The initial idea had been to have PAR cans on the ladders, but this was changed to the Robe Spiiders, which was “the right move” according to Niller. They also moved some of the trussings around to give it a more rocky and attitudinal look and added more LED products.

The Spiiders were purchased new for the tour by rental company Vigso, while the MegaPointes were supplied as a dry hire from Nordic Rentals.

Niller commented: “Right now MegaPointes and Spiiders are the most popular fixtures appearing on the specs and riders in Denmark, so it was a great opportunity for me to get to know them a little better!”

The Robe MegaPointes were positioned on the 4 roof trusses – 3 of which were straight with the back 1 curved to accommodate a wide backdrop and add structural dynamics to the picture. Eight of the Robe Spiiders were on the trusses with another 12 on 6 upstage vertical ladders which flanked a portrait LED screen in the centre.

Also on the ladders were Elidy LED panels, used sparingly for maximum impact, adding a touch of tungsten. He also had a few other moving lights, some LED strobe / flood fixtures for blinding and bumping and a bunch of 2-lite Moles. Niller was really impressed with both MegaPointes and Spiiders. “I have used many fixtures in my work and this is the first time I have really had the chance to discover what these can do,” he stated.

“There are so many possibilities,” he said. He has used a competitor brand of wash beam frequently in the past but, on the upcoming Volbeat summer tour, that’s now been changed to 36 Robe Spiiders, 32 Robe MegaPointes and 12 Robe BMFLs, which will be used with a remote follow spotting system.

He appreciated the brightness of the MegaPointe, “even with a saturated colour or a gobo in the light path they are still literally ‘mega’ bright” he enthused, adding that the movement is stable and “super-smooth” for the slower and more subtle shifts and tempo changes as well as all the high-speed effects.