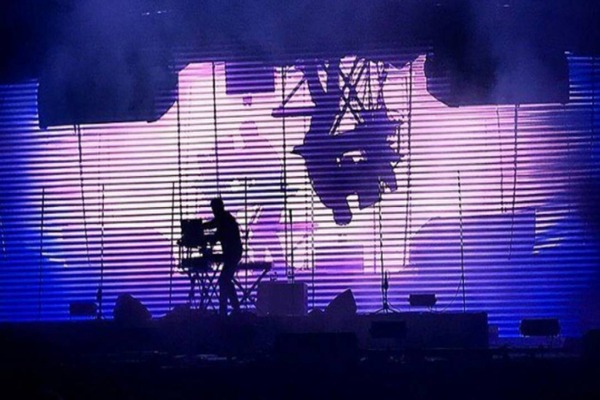 Nicolas Jaar, the New York-based Chilean composer, welcomed Colourblind to design the lighting and video during his European tour.

The tour made its way through a host of iconic venues and famous festivals, including Glasgow’s Barrowlands and Barcelona’s Sonar, claiming sold-out status and rave reviews. Colourblind, headed by Lynden Gare, designed a show to compliment the Chilean’s explorative music creations, and centre to the operation was a Hippotizer Media Server. The Karst unit used both SDI outputs, as well as splitting the DP to feed the LED strips. Running Hippotizer, it also fed IMAG screens at a number of the festival appearances.

Scenarios covered during the run included: projection at Front of House on to a special 3 metre reflection surface (replaced with upstage LED at festivals); rear projection through smoke; LED strips by Light Initiative; and IMAG were present at festivals. The lighting team also used Marshall SDI POV cameras, all of which were on stage, and able to create video feedback loops to get output.

Commenting on the Media Server maker, Lynden Gare said: “For a show with no fixed structure or set list, Hippotizer Media Servers gave me the flexibility to create a bespoke show each night in the same way Nicolas was performing.”