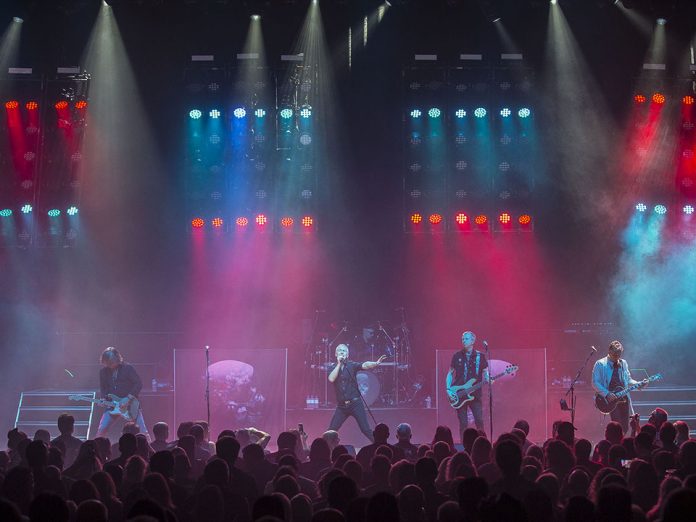 Lighting designer Ian Bintliff returned to top UK lighting and visuals rental company HSL to source equipment for the most recent UK tour by bluesy rockers Thunder promoting their new album ‘Rip It Up’ visiting a string of theatre and town hall venues.This follows last year’s arena tour – with lighting also supplied by HSL – and this time, the band were keen to play more dates in more locations at smaller venues to cultivate an intimate vibe and be closer to their very loyal UK fan base. With the new album, Ian – known throughout industry-wide as Scampi – created a totally new lighting design.

Some basic physical parameters included the kit having to fit in one truck of the two-truck tour. Manager and lead singer Danny Bowes’ instructions were to “Keep it cost effective and make it fab” and beyond that, it was an open brief, left to Scampi’s flair, ingenuity, experience and familiarity with the band after 14 years … to produce something eye-catching.

His idea was to start the set with a retro ‘rock gods’ look harking back to the pioneering days of Queen, AC / DC, Judas Priest, Van Halen, et. Al. – his inspiration to pursue a career in professional lighting was a Queen gig at Manchester Free Trade Hall circa 1975 – with high banks and huge walls of PAR cans. Then, as the set progressed, to move the look forward to being contemporary and NOW whilst still retaining some of those de rigueur rock platitudes.

He decided on four pods for the high impact back wall, made up of three pre-rigged trussing sections clamped together giving a 6 x 6 matrix of light sources. These could be split apart to get through the narrower get-in doorways and tipped in the truck – clearing only by millimetres – to stand vertical for an expedient pack!Each pod was populated with 18 x LED PARs and 18 x Philips SL Wash 350 LED moving lights giving a total of 144 in-the-face LED lights with numerous of highly effective options.

Two of the pods were flown off the back truss and two from their own small trusses. On the top of each pod were three Philips Nitro LED strobes, used traditionally and sometimes as floods – one of the many advantages of LED strobes. There were also six Robe BMFL Spots and six Robe Pointes on the back truss.For the first five or six songs, the pods were used in static colours, PAR can style in basic reds and blues. The first time they went white AND all on together was during a dramatic break in Thunder anthem Backstreet Symphony … after which they started changing colours, making jazzy patterns … and then moving three songs later, opening up a host of new visual dynamics.

For the whiteout cue, Scampi enjoyed a massive cheer from the crowd each night – one of those hair-raising moments, which every LD lives for!Moving downstage from the rear pods was the mid truss, which contained a kabuki – fitted with a drape backdrop for opening act, Cats in Space, plus six more BMFL Spots and 12 additional Pointes. These were used for all the power looks and big beam effects.

The front truss featured Robe ColorWash and ColorSpot 1200E ATs for some solid rock ‘n’ roll front washes and key lighting.Rounding off the lamp count, on the floor, were another eight Pointes, used for ACL looks and for nice strong beams in the softer numbers – the set was peppered with a few rock ballads alongside all the balls-to-the-wall core rock!Scampi’s console of choice was an Avolites Sapphire Touch.

After being with a band for 14 years, it’s always a challenge to deliver the base requirements and keep it looking fresh each time around. Then there’s lighting some vintage tunes that simply need certain treatments. “Some songs, no matter how radically the rig and the design has changed from the last tour … still need to be lit in a very specific way to do them justice”.

Timing is also essential, you have to be bang on with the music, so the fact that Scampi is into the Thunder sound and vibe makes that all the easier. He also gets great feedback and plenty of comments from both band and audience. “It’s always gratifying when people notice lighting and cues” he says. Thunder has also been a long-term client for HSL. Scampi’s first tour with them was around 2003 when they used house rigs, and started using production about 3 years later. The first production tour he did was with another company, after which it went to HSL in 2007 and has stayed there ever since, handled by the rock-steady Howard Dean.

“The service is fantastic, the kit and the facilities in Blackburn are excellent, the crew and all the people at HSL are great” enthused Scampi, “and that’s why we keep going back. The company is a real pleasure to work with”. His fabulous HSL crew on this one were Rick Foreman, chief rigger and crew boss and lighting techs Jake Jevons and Steve Foden. Harry Box was the tour rigger.