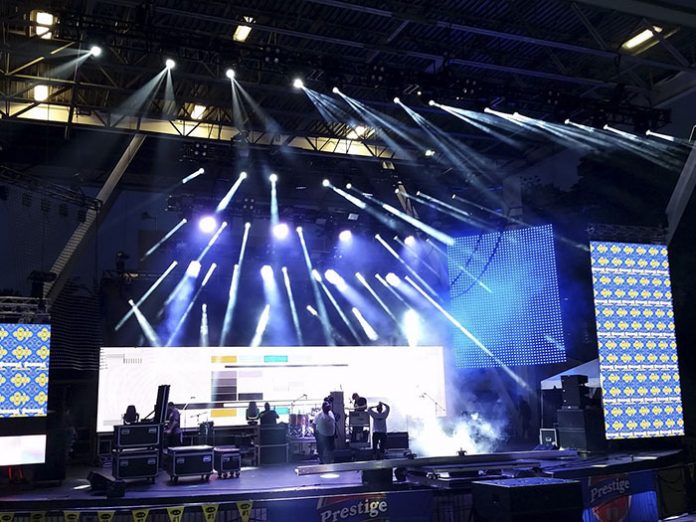 In May, some of Elation Professional’s newest, cutting-edge lighting gear was used by Lighting Designer Daniel Cortes of Everlast Productions on the Haitian Compas Festival in Miami, one of the largest Caribbean festivals in the United States. The Haitian Compas Festival is a yearly celebration of the Haitian community that features popular musical acts along with traditional Haitian food and other facets of Haitian culture. After 18 years as a one-day event, this year’s festival was held over two days from 20-21st May at Bayfront Park in downtown Miami.

Everlast Productions of Dania Beach, Florida, has provided lighting services for the festival for several years with Everlast’s Daniel Cortes serving as lighting designer and programmer for this year’s event.

“The Proteus Beams are definitely something I will use whenever I have the opportunity again. It was also important that these fixtures were weather protected as they were exposed on the downstage. Their IP65 rating meant there were no worries.” he added.

Cortes was one of the first in North America to get his hands on the IP65-rated Paladin, Elation’s new versatile hybrid LED luminaire with zoom that functions as a brilliantly bright blinder, powerful strobe and high output wash light. “The Paladin fixtures are just phenomenal all the way around,” he said. “I pixel-mapped them along with the Platinum 1200 Wash units and they gave a powerful creative look to the show.” Like the Proteus Beams, Cortes found creative ways to use the Platinum Beam 5R Extremes, a light he has been using since its first generation. “Since I used frost on the Proteus Beams for front light I really never thought about using them on beams since I really only use them for dynamic effects,” he said. “When a song ended I used the frost on the 5R Beams to sweep them to the audience and swipe from the upstage to the downstage with beams and then give it a bang with frost.”

Cortes used another of Elation’s newer lights, the variable-white DTW Blinder 700 IP, which were used as traditional audience blinder effects or warmed to enhance special moments. “The DTW Blinders were crazy bright as a blinder effect,” he said, “and their warm white and amber COB LEDs gave a nice ambient look as the music slowed down and a slow look came up.”

Platinum FLX
The innovative lighting technology continued upstage where Elation Platinum FLX hybrid units were placed on stage in front of an LED riser and flown in the air. “The FLX is a great spot fixture and also great for dynamic beam effects, great gobos and the zoom is awesome,” Cortes said of the award-winning multifunctional light. “What I really like about them, since we do a lot of corporate work, is the gobos, which are great. So is the focus and zoom. You can go from colour mixing to colour wheel and you can’t really notice the snap.” With so many versatile lights at his disposal, Cortes was able to create an endless stream of stunning looks throughout the two-day festival. “We used swipes, aerials, colours, all the fun stuff mixed in to make the show look great,” he concluded. “Combined with the different pixel cells and different layers it gave a lot of possibilities.”