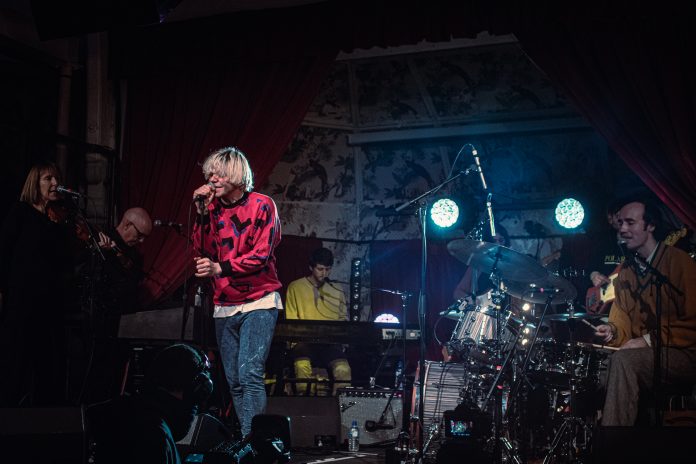 Earlier in the year, Tokyo Industries and Tim Burgess — best known as the lead singer in the Charlatans — stepped in to save two of Manchester’s most iconic live music venues: The Deaf Institute and Gorilla. Following the devastating impact of the COVID-19 pandemic on the live events sector, the venues now ‘go digital’ with the formation of Gorilla TV.

The venues’ previous owners, Mission Mars, announced the closure of both sites in July, but Burgess and team were determined to keep them going. Since the acquisition, however, the locations have been forced to remain closed due to the COVID-19 pandemic, and so Burgess decided an interim solution would be to ‘go digital’ through Gorilla TV.

Featuring live sets, interviews and videos from a wide range of genres and artists, all broadcast from the two Manchester venues, Gorilla TV has provided a lifeline for local artists and many industry freelancers.

In order to get started, the team created the Gorilla badge, to raise much-needed funds which would go straight into the hands of the contributors. “They went on sale and one week later we’d had a pretty decent pot to work with,” explained Burgess. “We wanted to make sure everyone working on the show would get paid, such as freelancers who hadn’t had a job in a while, sound engineers, venue staff and anyone who came to help.”

So far guests have included, The Cribs, Joan As Police Woman, The Lathums, Stephen Morris, Julia Bardo, Badly Drawn Boy and Tim Burgess himself. With many more being sought out to support the initiative in the future.

With six episodes under its belt, thousands from around the world have tuned in to watch and send messages of goodwill. “Gorilla TV has stirred up so much interest in the world of music, we think it’ll be here to stay,” said Burgess.

Instrumental in bringing the show to life is production company, Jackinabox PPU. The team’s video setup changes slightly depending on the segment being filmed, but primarily revolves around a bespoke touchscreen solution for vision mixing.

We recently caught a glimpse behind the scenes of Burgess’ performance with his band, The New Skies, at the Deaf Institute for episode three. Cameras included two Blackmagic URSA Broadcasts with HJ22 lenses FOH, one on a dolly in the pit with a HJ14 and a Micro Studio Camera 4K on the drums.

Looking back on the shoot, John Surdevan at Jackinabox said: “The stage there is small and there were seven band members, all needing to be socially distanced. There was no room for a camera op on stage, but the camera positions we did have worked really well.

“The picture quality of the Blackmagic cameras is pretty special, and the functionality of shading and tally is great,” he continued. “You get a cinematic and rich look, but with the range and smooth servo control of a B4 lens.”

Surdevan added: “These camera signals fed back to our vision mixer which is essentially an ATEM 1 M/E Production Studio 4K and a Raspberry Pi. The live mix was switched via a custom-built touchscreen app, and you simply tap a camera in the multiview to cut to it. It’s such an intuitive way of working.”

To stream the show, the team used a LiveU solo kit that encodes and streams to Vimeo’s CDN via the venue’s internet connection and two 4G dongles. “It bridges multiple internet connections together to make a faster and more reliable connection,” explained Surdevan. “Even if all but one fails, the stream continues.”

New episodes of Gorilla TV are released every Thursday at 7:15pm (GMT)