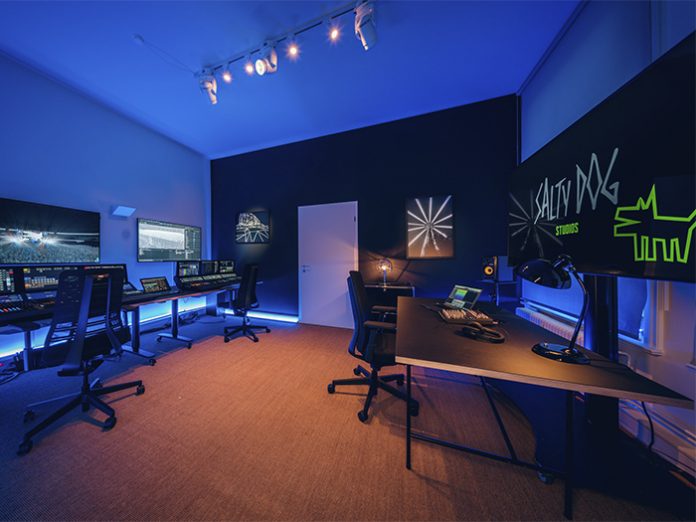 Jerry Appelt and Matthias Meyert to set up their own pre-programming studio under the name ‘Salty Dog’, inAppelt’s home town of Hamburg. Eight GLP impression FR1 TM (Trackmount) can be found in the pleasant ambience of the new premises, set in the historic Zippelhaus.

“Our planning office, Beacon GmbH, has been based in the Zippelhaus in Hamburg’s old town for a number of years,” explained Appelt. “So far, we have rented various studios for pre-productions, which apart from the technical equipment, usually don’t offer a lot of comfort. With Salty Dog we wanted to create a really appealing alternative in a prime location, which we of course use ourselves and also rent out. In the Salty Dog Studios we have integrated everything that we often missed in other studios. In addition, there is the attractive location directly opposite the Speicherstadt, with a large selection of good hotels and restaurants in the immediate vicinity.”

Salty Dog has two fully-equipped pre-programming studios (120 m² and 35 m²) as well as additional lounges and a separate kitchen area. Of course, the lighting design in the rooms plays an essential role. In order to be as flexible as possible here, the team opted for eight FR1 TM. GLP Key Account Manager Oliver Schwendke, who was involved in the project early on, recommended the small luminaire because of its flexible application options and its subtle look.

The FR1 TM is the fixed installation version of the ultra-compact moving light that can be easily integrated into the existing infrastructure. It is one of the most compact current moving lights and, with its powerful, homogenised 60-watt RGBW LED engine, outputs expressive, crisp coloured or white beams at a flexible colour temperature in the range of 2,500 to 10,000 Kelvin. In the Trackmount version FR1 TM, the spotlight has an EUTRAC 3-phase track adapter and can therefore be operated without any problems in all commercially available, compatible track systems.

Thanks to its compact design and wireless control, the FR1 TM is also ideal for illuminating galleries and museums. In the Salty Dog Studios, five FR1 TM are used in the central hallway, where they specifically highlight the large photo prints that adorn the walls. Three more spotlights are installed in the smaller of the two studios. Inserted effortlessly into an existing track, they can be wirelessly controlled via LumenRadio CRMX and allow maximum flexible illumination. Due to the extremely compact construction and the typical GLP baseless design, they fit visually into the studio rooms, in which a lot of value has been placed on aesthetics.

“I have used the FR1 a number of times in productions and, in addition to the design, I particularly appreciate the fact that the spotlights emit very good, variable white light, and also strong colours. The output is really considerable given the size. Of course we make use of the flexibility that these fixtures offer us. In this way, we can not only create changing lighting moods, but also immerse the studio in the customer’s CI colours. At Salty Dog, we attach great importance to the overall atmosphere—and the FR1 TM certainly plays its part in that.”