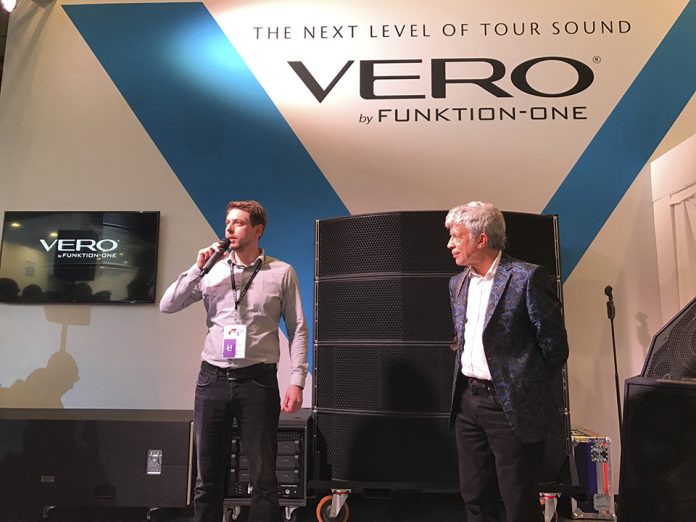 Funktion-One has added to its extensive range of bass reflex speakers with the release of the BR132. The British loudspeaker manufacturer launched the impressive 32in unit at Prolight + Sound 2017 in Frankfurt, Germany.

The BR132, which utilises Powersoft’s high power M-Force linear transducer and M-Drive amplifier along with Funktion-One’s own cone, surround and enclosure technology, is around 40% smaller than the horn-loaded F132, which debuted at the show last year. The 32in bass reflex speaker delivers elastic bass and super-low frequency extension and is particularly effective in applications requiring deep, strong and well-defined sub-bass at close range.

The BR132’s development was pushed forward by a requirement at Output in New York.

Funktion-One founder, Tony Andrews, said: “Following the launch of the horn-loaded F132 at Prolight + Sound last year, we’re excited about introducing the BR132 at this year’s show. It’s about 40% smaller, which has obvious advantages in terms of footprint. We originally developed it for Output in New York; we’re really happy with how it’s performing.”

While the first user case at Output is a fixed installation environment, the BR132 is also suitable for mid-size live and touring applications. Unlike the horn-loaded alternative, the direct radiator design of the BR132 means the 32in cone is visible. It delivers a frequency range of 25Hz – 65Hz and is effective in small numbers; as is the case at Output, where two BR132s make a strong impact.

Output’s owner, Nicolas Matar, explains the need for the BR132s and the effect they are having: “When we opened Output four and a half years ago, I asked Funktion-One to do something very unique and special for the club. The result was a massive bass horn extension that was originally developed for a client in South Korea who was transmitting messages across the DMZ to the North. It sounded truly spectacular but had a huge footprint. We were forced to build our DJ booth around this massive piece and that resulted in our DJ booth being too high and disconnected from the audience.”

Output was purpose built around the sound system. My goal was to have the best club system in the world, taking the listening experience to a new level. We set out to give the music the system it deserves and bass reinforcement is of course a major part of that. Having a lot of bass is one thing, but achieving the low frequency clarity and resolution that we have in Output has really been a huge achievement.

“The reviews from our patrons, artists, management and friends have been tremendous. Many people have found the added low frequency resolution to be un-matched by anything else they’ve ever experienced. With the addition of the BR132s, we re-configured the system to a true 5-way design with the BRs handling the 18Hz – 40Hz frequency band. That range is very hard to produce with other speakers. But now with the BR addition, Output is a truly full bodied audio experience where you can really feel the music as well as hear it.” Matar concluded.

The BR132 is available now through Funktion-One’s global network of dealers and distributors.