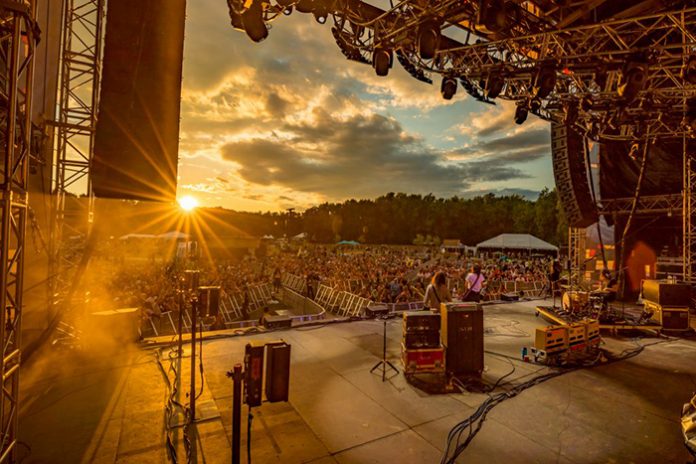 More than 50,000 people turned up for the Firefly Music Festival, the east coast’s largest music festival, where a packed line up of Travis Scott, Kygo, Death Cab for Cutie, Post Malone, Vampire Weekend, Passion Pit, Panic! At the Disco, Zedd and Tyler, the Creator kept the crowds entertained all weekend long. Bandit Lites worked with lighting designer Gabriel Fraboni and Lamda Productions to provide the lighting package for the main Firefly stage and Lawn Stage.

Bandit Lites has been involved with the Firefly Music Festival since its beginning eight years ago, and this year saw a fresh makeover of the stages.

“There was a new look on the treatment of the stages with new artwork scrims and headers,” said Bandit Lites Production Manager Dizzy Gosnell. “Gabe Fraboni took the helm of designing three stages for Firefly and really took them in a great direction. He and his team were diligent and thorough on all facets of the design, which is the only way I like to work on projects. Kat Harris from Lambda was wonderful running the production side of things for the Firefly stages alongside Tuffy Knight and Jeff Goodin and, as usual, were just fantastic to work with. We have such a great shorthand together with the Lambda folk having worked on dozens of projects over the last fourteen or so years”.

Bandit’s crew for the weekend was made up of Aaron Swetland, Terese Fensler, Elizabeth Weller and Joey Dileo on the Firefly Stage with Scot Sepe, Vanessa Tuttoilmondo and Catherine “Cat” Hoy working the Lawn Stage.

“The quality and range of lighting equipment available nowadays is just amazing to me, and we do sometimes take for granted the massive toolbox we in lighting now have at our fingertips,” summarized Gosnell. “But with all of these new machines comes the new knowledge needed by all of our crew on how to set them up, patch, program and tech them. I don’t think there’s any business on earth where the crew get such vast amounts of new devices coming at them with such speed and asked to make them run one hundred percent, oh yeah… and now please, not after dinner. Our show crew and backroom TSD staff are amazing in keeping everything working every night in the cold, dark, dusty, hot and wet conditions they have to work in. My hat is off to all of them.”