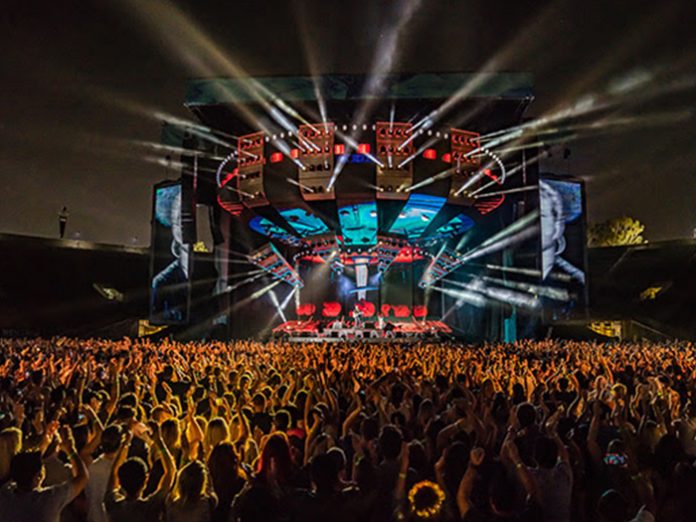 Propelled by an unbroken string of sellouts in NFL-sized stadiums, Ed Sheeran’s ÷ (“Divide”) Tour continues to draw thousands of fans from around the world to hear the unstoppable one-man band.

As has been the case from the beginning of his “A” level tours, Sheeran connects with his adoring throngs through a Meyer Sound LEO Family reinforcement system provided by UK-based Major Tom The production team relies on the power and transparency of LEO Family to deliver the dynamic punch of the music while creating a sense of intimate connection between Sheeran and his fans.

“Major Tom and the Ed Sheeran production team have a very strong relationship, which began with Ed when he was starting out playing clubs and has continued with him into stadiums worldwide,” Ed Sheeran Production Manager Chris Marsh said.

“The key to the longevity of the relationship is a mutual desire to continually evolve, and provide the best sound. Major Tom is heavily invested into Meyer Sound products and the response from Ed’s family, friends and team when we originally switched to the LEO system was an instant observation and acknowledgement that we had changed something — the difference in sound was palpable.”

Marsh continues as Sheeran’s trusted FOH engineer, a post he has held for more than six years. He also mixes Sheeran’s monitors on the same DiGiCo SD7 console and supervises all aspects of the tour’s technology as production manager. Marsh’s partner in fine-tuning the tour’s massive LEO Family rig on a daily basis is Audio Systems Engineer Charlie Albin.

“Our touring system has transitioned smoothly into the USA stadiums,” said Albin. “Although every venue presents a slightly different set of challenges due to variations in size, shape and reverberant field. That’s why we keep using the Meyer Sound LEO Family loudspeakers alongside the GALAXY processing and SIM3 analysis tools. Together they deliver the consistent clarity, tonality, musicality and dynamic impact from the nearest to furthest seats, whether Ed is singing an intimate ballad or an all-out belter.”

System drive and optimisation are entrusted to a pair of Meyer Sound Galileo GALAXY AES master processors, with stage array processing from eight GALAXY processors and delay processing by four Galileo processors. The tour also carries a SIM®3 audio analyser for a fine-tuning response before each concert.

Sheeran uses a Sennheiser 9000 Series digital wireless system for his guitars and on-stage microphones. The primary vocal mic has a 9235 dynamic capsule while the secondary mic (for loop-building) has an MMD 945 super-cardioid capsule. His intricate multi-channel accompaniment is built in layers using a sophisticated, computer-driven Chewie II Monsta Looper pedal system.

Regarding the record-breaking success of the tour, Albin commented: “Personally, it hasn’t had any bearing on my day-to-day aims. The motivation is to deliver the best show as consistently as possible to every single fan in attendance, whether in an audience of 100 or 100,000.”

The 2018 North American leg of the ÷ Tour was launched on August 18 at the Rose Bowl in Pasadena, California, where Sheeran thrilled over 62,000 of the faithful. The leg continues through the final show at Mercedes-Benz Stadium in Atlanta on November 10, with a total of 24 shows in 21 cities. The ÷ Tour, which started in March 2017, has shattered Pollstar’s all-time record for mid-year gross receipts.

Sheeran’s stratospheric popularity is further reflected in the recently announced nominations for the American Music Awards, where he is a leading contender in six categories: Artist of the Year, Tour of the Year, Favorite Male Artist (pop/rock), Favorite Pop/Rock Album, Favorite Song and Favorite Adult Contemporary Artist.