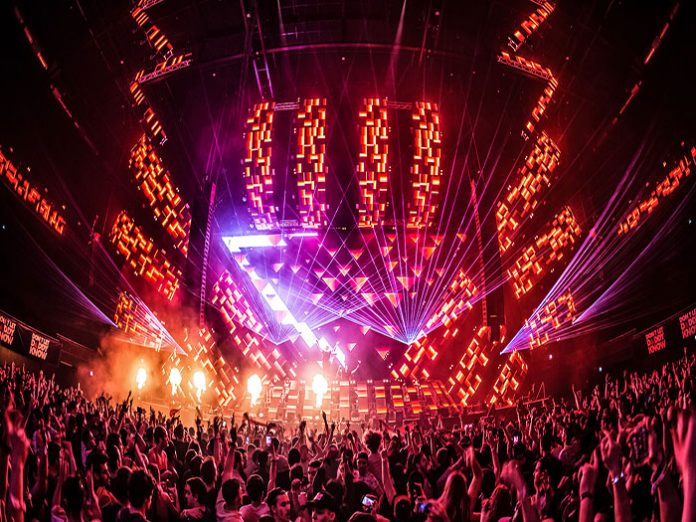 The 2018 Amsterdam edition, produced by Dutch7, returned to the Ziggo Dome for 2 nights, for the first time with creative lighting designed by Bas Knappers from Netherlands-based creative practice, Live Legends.

Live Legends has previously provided programming and operating teams for the event and in the design ‘hot seat’ Knappers specified 122 Robe Pointes and 40 Robe MegaPointes as part of a large lighting rig, supplied by Rent-All together with video and sound.

The fixtures were positioned on a series of trusses above and to the sides of the stage and the venue as well as on four large moving objects flown above the audience – each with 9 Robe Pointes on-board – plus 6 static structures over the audience.

Originally, Knappers considered having Robe BMFLs on the plot to deal with the long throw distances, but Robe’s signature high powered moving light was in such demand that weekend that instead they decided on Pointes and MegaPointes, which Knappers found “absolutely excellent” for the job. “It’s incredibly powerful and we used and enjoyed the huge zoom extensively and loved the impressive gobo break-up looks that could be created”.

The imaginative challenge for DLDK, which packed the venue to its 17,000 capacity each night was that the show has to be big and ballsy, and also needed to have some intimate and close punctuated moments.

All the lighting elements were undertaken by Live Legends with 4Light co-ordinating the overall lighting production, KBK Video created and ran the video content, MG Services provided audio and Pixelscreen dealt with video. Lasers were provided by Laser Image and staging from Coreworks. Eventions BV supplied all the staging and automation and Pyrotech took care of the SFX.