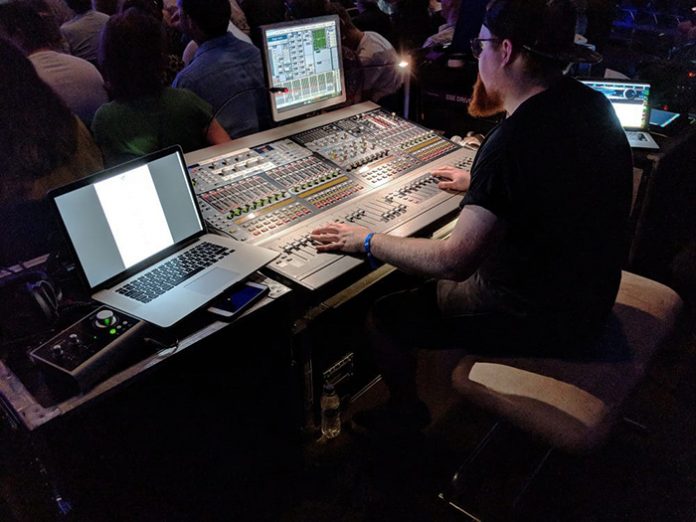 Catapulted into the role not long after graduating from London College of Music (LCM), Cosimini arrived loaded with zeal, ambition and an Audient iD14, all set for her You tour in October where the audio interface was invaluable in a live setup.

Conor Cosimini, producer and studio co-owner got a call in 2018 asking him to join English singer/songwriter Dodie’s touring team as monitor engineer. “The iD14 has come on both tours – and every other show I’ve done since – and I couldn’t be happier with it,” confirms Cosimini in the afterglow of Dodie’s most recent ‘Spring Tour’ which ended in April.

Cosimini admitted that he was already a fan of Audient. “I use iD22 in my writing and location recording rigs all the time,” he said, making the decision the to choose iD14 for Dodie’s live setup even easier.

“When I’m on the road, I like to have an interface with me for two reasons. As a FOH or monitor engineer, I use SMAART for real-time analysis and tuning of the PA/wedges, so I always need a super-clean mic pre with high-quality converters for this. I also like to have something for on the bus/in the van for listening to show records or working on other projects, and the ability for it to be bus powered is really important, as power isn’t always available. So naturally, coming from the iD22 the iD14 fits this bill perfectly.”

Dodie herself has enjoyed a rapid rise from YouTube sensation to a successful live performer. She posts both original and cover songs on her main YouTube channel, ‘doddleoddle’ which has over 1.5million subscribers, and a total of over 315 million views across all her channels to date. Now, two independent EPs later, (both of which charted within the top 40 of the UK Album Chart) she’s very much on the touring scene and has surrounded herself with a strong team of live sound professionals.

“The portability of the iD14 is super important for me,” continued Cosimini. “It takes up next to no space in my Peli but when combined with a good reference mic, it’s the ideal solution for running my RTA software with its incredibly clean gain on the mic pre and ease of setup.”

Cosimini explained how his Audient interface has worked hard from the outset. “Working with Dodie: she’s an all-around great musician, however, she’s not the loudest singer or player when she has the guitar or uke, so when on wedges they’re always running pretty hot. For the first tour I did with her I had the iD14 running SMAART for tuning her wedges, and then during the show, it was a quick and easy visual representation of any frequencies that were threatening to take off.”

Describing how the iD14 has been particularly helpful on the latest tour, Cosimini said: “The balance box we had for some playback went down during one of the shows, and I quickly swapped the USB from my laptop to the playback machine and hooked the line outputs into our splitter – a 30-second fix and no one was any the wiser.

“When I’m running Front of House I mainly use the iD14 for tuning the system, but if the console I’m on doesn’t have the digital outs I need, it’s great for being able to throw a couple of jacks into and taking a copy of my master bus for a show record. Being able to do this on bus power is often a massive time saver too.”

So Dodie’s tour is over, but Cosimini doesn’t appear to be stopping any time soon, listing a couple of co-writing and production projects that he’s working on (but can’t talk about) and also preparing for his next live shows with Orla Gartland and Hannah Grace.

Overall Cosimini has a lot to be proud of, although he plays it down. “I think it’s more my relationship with the artists and people I work with. I feel like it’s one thing to do the job well – I know there are plenty of people that could really do it better than me – but another to be a person people want to keep working with, so I guess to keep getting the call I must be doing something right.”