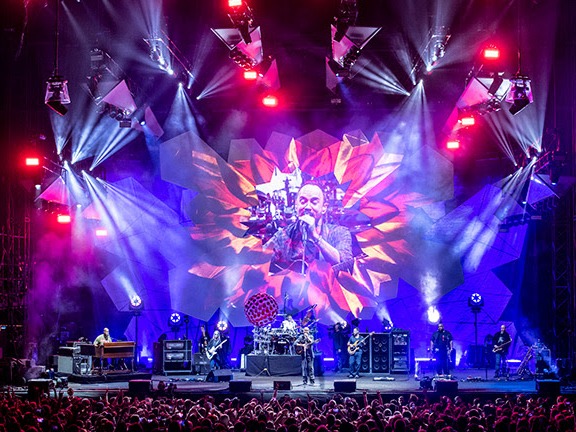 From Texas in May through the final September shows in California, the Dave Matthews Band recent tour’s audio production relied on a Meyer Sound LEO Family system supplied by Martinez, California-based UltraSound.

For more than 22 years, UltraSound and Meyer Sound have been the bedrock of the Dave Matthews Band live production. For Jeff Thomas, the DMB’s FOH engineer for nearly 27 years, this enduring relationship with UltraSound and company co-owner Derek Featherstone — also FOH mixer for The Dead, Dead & Company and related ensembles — helps keep the tours running smoothly.

“Derek has such a well-rounded perspective on everything,” says Thomas. “Being a production manager and mixing engineer as well as a businessman he approaches any situation with a balanced and comprehensive design to it. If there’s anything we want to do audio-wise, he can relate to it in a way that everybody understands, including DMB management, promoters and venues. And I can always rely on him for good advice on the particulars of audio.”

Another well-tested ingredient in the DMB touring recipe is Meyer Sound LEO Family line arrays, the core element of the band’s touring audio production for the past 5 years.

“One thing I really appreciated about the Meyer Sound rig on this tour was the throw of the LEO arrays,” said the tour’s Systems Engineer, Tom Lyon, who has been with UltraSound since 2000. “LEO can easily hit the lawns of the amphitheatres without running out of headroom, which means we can mix comfortably loud with plenty of dynamic range still available. The other things about the LEO Family are that all the boxes are incredibly linear, so there is very little difference in tonal response between when the music is loud and soft. We don’t have to rely on compression to prevent the sound from getting harsh when it’s loud.”

For most of the amphitheatre shows the system was configured with main and side hangs of 16-each LEO line array loudspeakers, augmented by 2 hangs of eight-each 1100-LFC low-frequency control elements. Front fills were eight LEOPARD loudspeakers, with 4 CQ-2 loudspeakers deployed for miscellaneous fill as needed. System optimization and drive were supplied by Galileo master processors at FOH and Galileo Callisto array processors at the stage. The artist foldback system included 8 MJF-212A stage monitors.

Although his job is FOH engineer, in recent years Jeff Thomas has taken to mixing the DMB’s music — on an Avid Profile console — at a backstage location with as much acoustic isolation as possible.

“This all started with some of Dave’s acoustic shows, when sometimes the way the audience behaved was at odds with what we were trying to do,” Thomas explained. “Also, venue acoustics are often an issue, and the specific locations where you have to work can be problematic with a lot of variabilities. I find that if I’m in a remote location I can mix the music to the best of my ability. I can produce a consistently stronger mix for the systems engineer to put out into the room.”

According to Thomas, although he and Lyon are in separate locations, the isolation has actually improved their teamwork. “What I am doing is mixing the music while Tom takes care of adjusting the system to the acoustics of the room. Those are two separate tasks. What I feel is the downfall of the traditional approach is that, if the person mixing the music is constantly subjected to the environment, he is constantly adjusting individual components of the mix to accommodate that environment.

“If there’s a frequency or tonality that’s a problem in the room, I don’t want to adjust it in my mix. I don’t want to be playing around with the low end on my kick drum while Tom is EQ’ing the subs, or working on the drum overheads while he’s adjusting the high end of the PA. If we do that, we end up chasing each other in circles.”

When he’s backstage listening on his Sensaphonics IEMs, Thomas has to have full confidence not only in his systems tech but also in the consistency and control of the system that is carrying his mix to the audience.

“There’s no doubt that the Meyer LEO Family is a wonderful option,” he said. “One of the biggest advantages is the uniform control of all frequencies. When you get to the edge of the pattern, all the frequencies behave in the same way, it’s very consistent. We don’t have a problem of rogue frequencies leaking out beyond the others.”

Thomas also cites the system’s advantageous front-to-back ratio. “I really noticed how little information is coming out the back of the LEO loudspeakers. We can EQ the audience side of the system to sound good, but then if there are problems with sound coming off the back and going into the microphones on stage, I would have to address those in my mix — and that in turn can generate problems out front. But with the LEO Family we can EQ them for out front and we don’t have issues behind them.”

The Dave Matthews Band Come Tomorrow summer tour stopped at 40 cities in North America, with strong pent-up demand prompting two shows in six cities plus the traditional triple-header at The Gorge Amphitheatre in Washington State over Labor Day weekend. The Meyer Sound UltraSound touring system was used for all shows except for two festival appearances, although one festival (in Ottawa) deployed a similar Meyer Sound LEO Family system from a local provider.