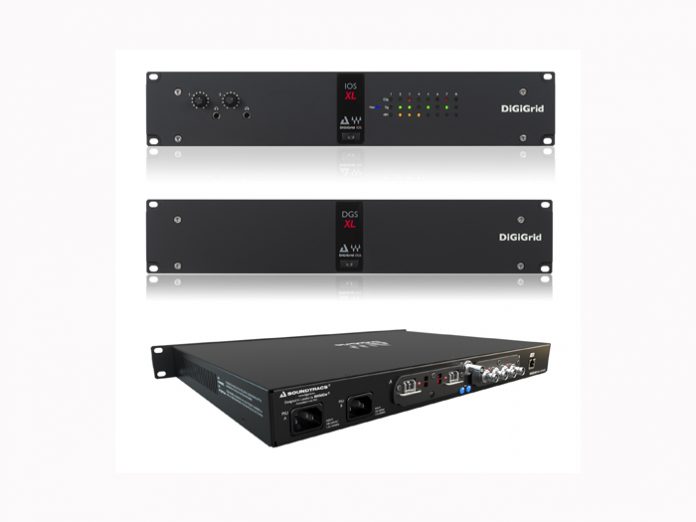 DiGiGrid launched three new interface and SoundGrid processing products at NAMM 2019; the IOS-XL, DGS-XL, and the MGR. These latest offerings deliver the perfect combination of power and flexibility for users who work in multiple environments or need to take their studio sound on the road.

The DiGiGrid DGS-XL is a stand-alone Extreme SoundGrid i7 DSP Server with an integrated 4 port PoE capable network switch for simple integration into SoundGrid systems; users can connect any of DiGiGrid’s range of network connected audio interfaces for more inputs and outputs. With PoE capabilities, the DiGiGrid Desktop interfaces are simple to add; a single ethernet cable carries both the audio signals and the power.

Together with the SoundGrid Studio System, MultiRack SoundGrid or Waves LV1, DiGiGrid IOS-XL and DGS-XL enable users to mix and monitor in real time using hundreds of SoundGrid-compatible Waves and third-party plugins, with a super low latency of only 0.8 milliseconds.

The DiGiGrid MGR is the world’s first quad MADI interface, providing a natural extension of the popular DiGiGrid MGB and MGO Interfaces. The 1U MGR takes either BNC Copper or LC optical MADI cards, making the unit totally flexible for integration into any MADI setup.  With a choice of Multimode or Singlemode fibre on the optical MADI card, and with redundant power supplies, the MGR is perfect for critical live and broadcast applications.

With four MADI connections and a built-in SoundGrid switch, users can record and playback up to 256 channels at 48kHz or 128 channels at 96kHz. When combined with a DiGiGrid DGS-XL SoundGrid Server, the MGR allows users to take advantage of the ultimate MADI recording and real-time processing system.

“Our customers are always the touchstone for our product development, and we have responded to their feedback with the most powerful, networkable audio interfaces and servers yet,” comments DiGiGrid Brand Manager Dan Page. “With twice as much DSP power and connectivity now available, there is no reason for any engineer to compromise on the number of tracks and sonic tools to use in their mix.”