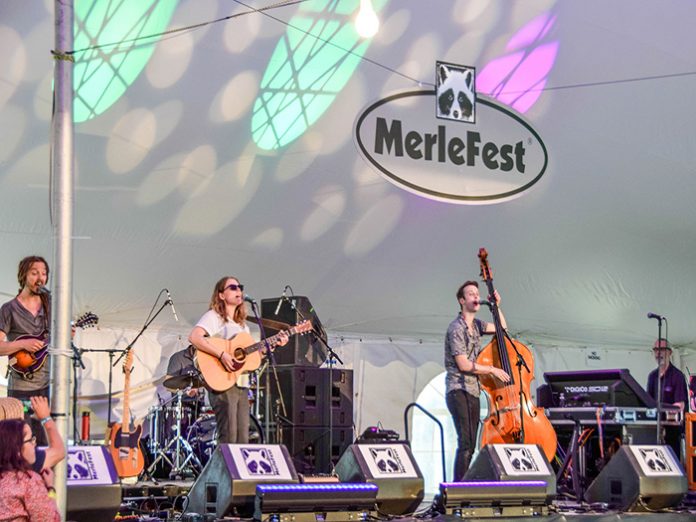 And as has been the case for a number of years, DiGiCo consoles mixed and processed nearly all of the music emanating from the festival’s stages, helping to cement MerleFest’s reputation as a highly celebrated perennial American music event.

MerleFest was founded in 1988 in memory of Eddy Merle Watson, son of bluegrass legend Doc Watson, as a fundraiser for Wilkes Community College and to celebrate “traditional plus” music, a term coined by Doc Watson to describe the wide variety of musical genres and styles celebrated at MerleFest. Since the festival’s beginnings, Greensboro-based SE Systems has been handling the sound for MerleFest.

SE Systems CEO and Founder Cliff Miller was working with Doc Watson at the time and helped put the audio production in place for the first MerleFest in the John A. Walker Auditorium that sold out immediately and was quickly expanded to an additional location outdoors on flatbed trucks, which is now the site of the Doc Watson Theatre.

“The SD-Range consoles have been the workhorse of the festival for the last several years, to the point now where it’s nearly all we use,” said Miller, who sat in on guitar at many of Doc’s later gigs. SE Systems has its own SD consoles on site, with DiGiCo distributor Group One bringing in multiple additional consoles, racks, and personnel to support the sprawling event. In fact, this year DiGiCo consoles were used on nine of the event’s ten music stages.

The Chris Austin Stage, named in honour of Reba McEntire’s late touring guitarist and home to the Chris Austin Songwriting Contest during MerleFest, had a pair of compact DiGiCo S21 consoles for front of house and monitors, both sharing a single D-Rack. The Watson Stage, the namesake of the festival’s icon, is the largest of all and had an SD5 console for FOH and an SD10 for monitors, as well as two SD-Racks fully loaded with multi-mode optics and Waves bundle. (In fact, most of the consoles used at MerleFest this year were fitted with multi-mode optics.)

The Creekside Stage used 2 DiGiCo SD10-24 consoles and a shared SD-Rack; this stage uses fewer inputs but takes advantage of all the power of the SD10. The Dance Stage had a pair of SD12 desks and an SD-Rack equipped with the new 32-bit Ultimate Stadius Mic Pre-Amp cards. The Americana Stage used a D-Rack and Little Red Box for its two SD9 consoles covering FOH and monitors. The Traditional Stage kept it simple with one S21 and a D-Rack, while the Hillside Stage used two SD12 consoles for FOH and monitors with one shared SD-Rack loaded with the new 32-bit input cards.

The Cabin Stage had to be different: a DiGiCo SD11 console for FOH linked with a single D-Rack; this stage has limited inputs and can still be run from the front-of-house mix position, so having two separate FOH consoles gave SE’s engineers the flexibility to reset the main stage while the Cabin side stage fills in between the main acts. Finally, at the Walker Center, two SD10 consoles shared an SD-Rack between them, also featuring the new 32-bit cards.

The Archive Recording Studio set up to record various performances at the festival used a DiGiCo S21, which fed signals to a converter that output .wav files to a Glyph drive. And as Miller noted, other artists performing there brought their own DiGiCo SD9 consoles with them, including the Steep Canyon Rangers and Friends with special guest Steve Martin, further expanding DiGiCo’s coverage of this festival.

Miller says the artists and their mix engineers love the brilliance and transparency that SD-Range consoles bring to acoustic instruments and to the focus on vocals and harmonies that characterise the music here. Plus, they bring some very practical logistical benefits. “

“Since the consoles have very similar operating systems, it made things easy for artists playing multiple stages to quickly get their mix. Their engineers can simply save setups and scenes on a thumb drive and move them between consoles,” he explained.

In addition, Miller lauded DiGiCo and Group One for the support they bring to the festival each year. “DiGiCo has become synonymous with MerleFest,” he continued. “It’s very much a DiGiCo affair, and more so each year. And that’s good because they sound great!”