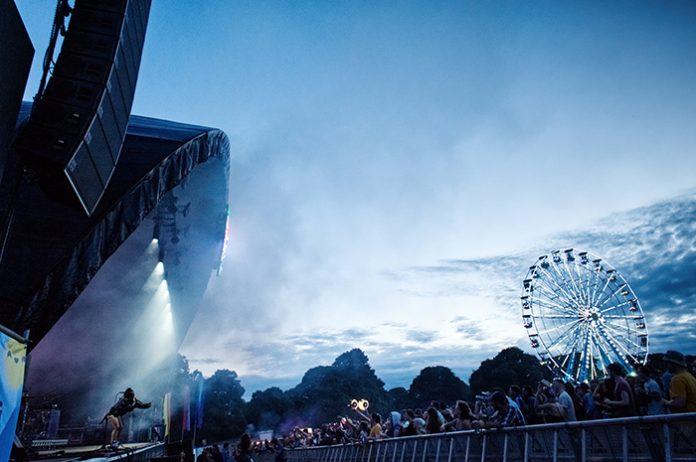 Almost every word and note performed at the inaugural All Together Now (ATN) festival was heard through a d&b audiotechnik system supplied by Dublin’s Session Hire, who was charged with handling the full gamut of audio and visual requirements at the event.

“We’ve been working with the promoters for years and they always put a huge emphasis on delivering the best audio experience for visitors. We were delighted when we were approached to take on no less than ten stages for All Together Now. It was very exciting to be involved in the first festival, shaping the way the event looked and sounded right from the start.

“Every stage featured a d&b system, from compact T-Series and Y-Series in smaller venues to the flagship GSL system in the main arena, where we had to deliver coverage 50m wide and 100m deep. The feedback we’ve had since the event has been incredibly positive.”

Indeed, there was a buzz from touring FoH engineers about using the SL-Series at the main stage even as they arrived for the festival.

“They were all excited to use the system,” recalled Will Fitzpatrick, system tech throughout ATN, “and everyone left very happy. Even at high SPLs the SL-Series never seems under pressure, never loses stability or clarity. And everyone was stunned by the cardioid pattern of the system and how well controlled it is, even in the low frequencies. There’s a fantastic punch and focus to the sound as a result. We’d read all the reviews when the system launched and it did not disappoint.”

In addition to the sonic performance of the SL-Series, Fitzpatrick is quick to point to the workflow of the system as another of its highlights, particularly when delivering multiple acts over a festival weekend. “The GSL arrived from Wigwam via Session Hire and we had it from truck to flown incredibly quickly.

“The workflow is a huge plus for me,” he nods, “d&b’s ArrayCalc simulation and R1 Remote control software is fantastic to use and the ArrayProcessing (AP) algorithms work so well that it really simplified the process of delivering even, consistent coverage throughout the arena. Having your various AP slots, where you can redirect power exactly where you need it, gives amazing control over the system.”

“And I have to mention the excellent support we had from d&b around All Together Now,” chimes in Ashe Browne, “they’re always at the end of the phone, very personable and there whenever you need any advice. It really made the whole project as easy as these things can be and I’m looking forward to the prospect of working with d&b as the festival grows.”