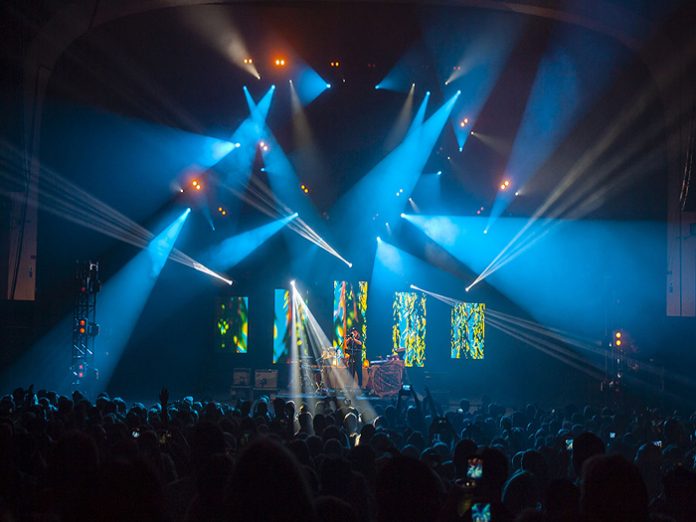 Detroit-based LD Cam Anderson started working with Tash at the end of 2017 during a US tour and evolved the current stage design with the artist to complement the performance and style.

It includes a distinctive flown triangular truss upstage, together with a series of staggered video panels behind the centre-stage position which brings structure and form to the performance space. These elements were crafted working closely with Tash and her international production crew.

The resulting set is highly visual, and the rig can be up / down-scaled to deal with venues up to 6,000 capacity and still fit expediently in a single truck. Anderson then added wing trusses to reinforce the triangular shape, together with two side trusses on stage left and right.

Anderson specified Robe Spiiders, especially for the zoom, and there were 18 on the rig – 6 on the main triangle, 4 on each of 2 short trusses that were sub-hung each side of it, and 2 a side on the side trusses.

They were all running in Mode 1 which unleashes a host of ring effects. Utilising the outer ring he created halo effects, and utilizing just the centre 60W LED, they became a completely different luminaire. Robe Spiiders flower effect was also used once during the set. Anderson quipped: “It’s invaluable with deeper colours where CMY fixtures lose intensity”

For profiles, Anderson chose Robe BMFL Spots which he reckons, “excel in every aspect” to complement Robe Spiiders. A total of 18 fixtures alternated with the Spiiders on each of the same trusses – the main triangle, its sub-hung trusses and the 2 side ones.

All the trusses were lined and toned with Showtec 2-cell Moles – which offer DMX control and onboard dimmers. A further 6 were mounted on 2 short vertical truss sections located in the downstage corners, part of the floor package with another 6 Chauvet Professional Rogue Washes.

Completing the lighting count was a Claypaky Sharpy sitting on top of each of the 5 video towers.

These were cleverly rigged to appear to be floating and spaced to fill up as much of the floor as possible.

Anderson described the content, produced by designers Tim Grove and Pat Fox as “mesmerising, beautiful and reflecting the music really well” and this was run via Resolume triggered by his Jands Vista S3 lighting console.

Colour Sound lighting tech Simon Robertson was on the tour, and his experience and extensive knowledge was invaluable in solving the day-to-day challenges of rigging, the biggest of which was hanging the triangle.

“Some days it fought us most of the way, but Simon had it flown and powered up by lunchtime every day” explained Anderson.

There wasn’t the room to fly the entire rig in every venue on the itinerary, however with the options of B and C versions, 90 % the set concept was used everywhere.

“It’s been stellar working with Colour Sound” concluded Anderson. “Their gear is clean and well maintained, the staff are friendly and helpful and I’m excited to work with them again in the future!”