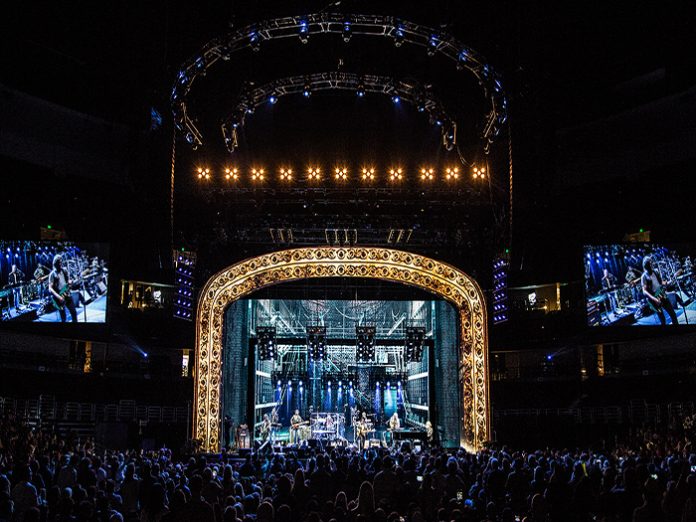 Hall & Oates thrilled fans touring with Tears for Fears last summer. Now Daryl Hall and John Oates are back this time performing with Train. For the new show Hall & Oates and Train each do a set then the bands join forces for a dynamic finale. The tour launched May 1 in Sacramento and will conclude in Seattle in mid-August.

Guthrie has designed a look for the tour that “feels modern but harkens back a bit to Hall & Oates’s legacy,” he said. “The lighting is reminiscent of rigs past with newer fixtures and more modern equipment. The video component is also larger than before.”

Downstage a front-projection screen has the form of a curved theatre proscenium. Mid-stage is an upside-down ‘U’ composed of LED tiles. Upstage is a rectangular LED wall and simple scenic elements. “The lighting supports the scenic elements and adds depth between the video components,” Guthrie explained.

“The show is lit very much like a TV show with very consistent levels. We’ve modelled the guys to look good to the eye and on camera for the IMAG displayed on the side screens throughout the show.” Morris Light and Sound in Nashville is the lighting vendor for the tour.

Guthrie chose 86 Sharpy Wash 330s, which are configured in clusters in pods that move up and down on a hoist system. “I really like the Sharpy Wash – it’s bright and versatile,” he said. “We create a lot of looks with the Sharpy Washes, from saturated blocks to beams like ACL clusters, without looking too modern. Since they don’t have a LED-looking face they kind of harken back to Hall & Oates’s good old days.”

The Lighting Designer also has 64 Claypaky Mythos 2 fixtures in the rig. “One of the big considerations was that Daryl likes to see the audience,” Guthrie notes. “So we have Mythos on two large, semi U-shaped trusses for long-range deckle washes and to bring the audience into the stage.” Claypaky Mythos 2 fixtures are also on stage in high positions in the pods and in torm positions for cross-lights; 6 Mythos are also on the upstage floor.

“I thought of Mythos originally as an effects light, but they act as a workhorse on this tour,” he said. “They give us a shaped beam for a few songs then we open them up and use them with gobos and a wash application over the stage.”

MA Lighting grandMA2 full-size consoles, one active and one back up, with two NPUs are deployed to control the show’s lighting and video elements. Guthrie is a longtime user and owner of MA systems.

“During programming, our Lighting Director Dave Carr would program on one console and I’d log onto the other to edit and add video,” he recalls. “The grandMA2’s Multi-User function enabled us to work productively simultaneously. And Train’s Lighting Director Joel Wojcik had the board completely configured for his own use, too. He could do Train’s portion of the show in a completely different way on the same board.”

Guthrie reported that “everything is working fine” on the tour, and he sends his “thanks to Doug Mekanik and George Masek at ACT Lighting for their constant emotional support.” 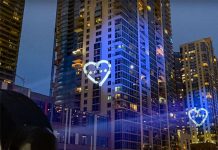 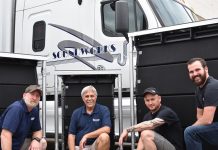