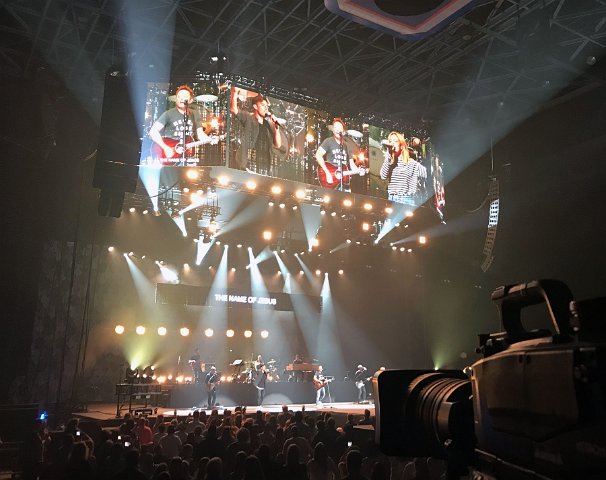 Grammy Award-winning Contemporary Christian music artist Chris Tomlin, will be Kicking off his tour on the 4th of April at the Freeman Coliseum in San Antonio. The tour brings together a diverse array of music styles for nearly two-dozen concerts staged across the US through mid May. Tomlin is relying on an L-Acoustics K1/Kara combination to get every note and lyric across clearly.

The main system is driven by 14 LA12X amplified controllers—the first time Tomlin has taken these out on the road—while 16 LA8 power the Kara down, front and side fills, as well as the subwoofers. The tour also uses four DiGiCo SD Series consoles and two Dolby Lake processors, which are accessible through an insert point on the DiGiCo SD10 console used by Tomlin’s front-of-house mixer, Kyle McMahon.

McMahon, who began mixing FOH for Tomlin this year after having previously worked with the artist as his monitor engineer, says that the L-Acoustics K1/Kara combination has worked well for Tomlin’s multi-artist tours for over five years.

“The K1 is a very linear speaker as far as its tone—it doesn’t change from artist to artist or from high energy songs to quiet ballads,” McMahon explained. “When using other PA systems on these kinds of tours where we have multiple artists and a lot of dynamics changes from one song to the next, I used to find myself chasing the music trying to tune the system for each new emotional level after it happened. It was easy to get very aggressive with the mix when I didn’t intend to. That doesn’t happen with the K1—it sounds consistently even and great from song to song, all night long.”

Nick Turner, the system technician on Worship Night In America, said he’s noticed the volume levels going from 92 dB(A) to 102 dB(A) during the course of a single show. He noted another reason the K1/Kara combination has worked so well for Tomlin now and in the past: in certain smaller venues on the tours, the spaces allow them to use the Kara boxes as the main PA system, with 12 to 18 Kara hanging per side. And he likes the fact that the entire system can be packed into three semi trucks, keeping the tour economically sound.

McMahon, who has been a fan of L-Acoustics since he first worked on a V-DOSC system a decade ago, the K1 and Kara are easy to specify for a wide range of shows. “They just sound great on vocals, and they play well together in a system,” he said. “That’s why we developed this configuration over the last few tours with Chris, in an attempt to keep things as consistent as possible from tour to tour, and show to show.”

Turner noted, “In Contemporary Christian music, the vocals and lyrics are very important, and the K1 has a very smooth midrange sound that really helps bring clarity to the vocals and entire mix. The K1/Kara PA works so well for this kind of show; we couldn’t imagine doing it without them.”