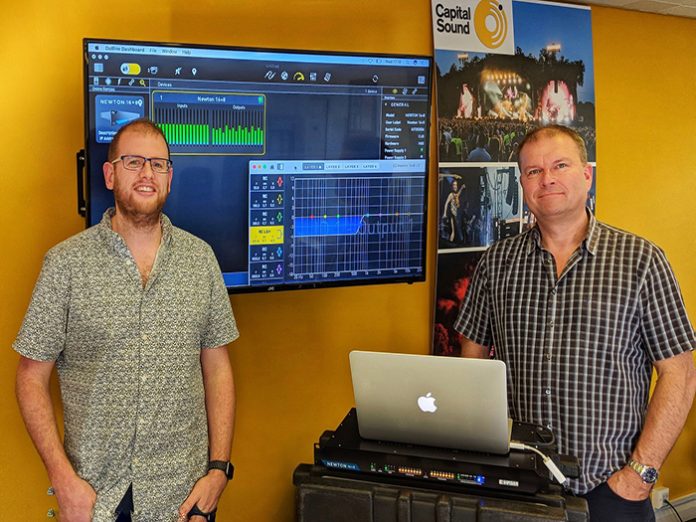 London-based Capital Sound Hire becomes the first in the UK to increase its Outline inventory with the addition of the Italian company’s latest multi-role processor, the Newton.

Officially launched at prolight+sound 2018 in Frankfurt, the extraordinary flexibility of Newton brings a new level of convenience and system integration possibilities to professional users throughout the audio industry.

Capital Sound’s Paul Timmins said: “We were introduced to the concept by the Outline team when we were buying into the Outline GTO C-12 system during late 2015 and early 2016. We took an immediate interest and, having then followed its development over the last two years, we are incredibly excited we have received our first production units.”

Robin Conway added: “My interest was immediately piqued during my first introduction to the unit and the concept, then our internal team and some external staff saw it during our Outline array training at SW19 Studios. The right people in the room were immediately interested, at which point I knew it was a product we needed to add to our inventory.”

“These units were bought as an option for our drive systems in general, as they have the ability to run all four brands of loudspeaker system presently in our inventory – however, there are so many elements to this unit that are of interest, not least that the platform, being FGPA based, will allow the unit to continuously grow during its life span.

Conway concluded: “We are trialling the unit in a live environment on the Sam Smith World Tour. We felt it was important to get the unit out there and begin to introduce it into the signal path over the course of the next few months. Further to this we are in the process of building some new drive racks to house the Newtons and these will be deployed during festival season with our Outline system before being rolled out, where appropriate, on touring projects later in the year.”