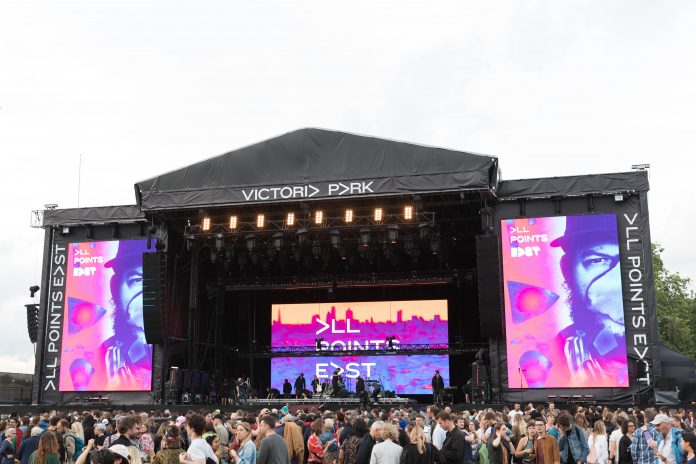 For the second year running, All Points East Festival took over Hackney’s Victoria Park — now an established music site on London’s inner-city festival scene despite the density of surrounding houses.

Capital Sound and its Martin Audio MLA loudspeaker array had first proved the viability of the site a decade earlier when demonstrating that the London Electronic Dance Festival and Field Day could deliver sound pressure levels of up to 101dB(A), acceptable to festival goers while reducing offsite levels to 75dB(A), causing minimum disturbance to the neighbours.

The experienced AEG Presents team led by Jim King, and event production company LarMac Live, led by Director Ian Greenway, have called on Capital’s expertise and the proven technology of MLA, with its advanced multi-cellular control, many times over the years. And this latest ten-day festival was no exception.

Said Capital account manager Martin Connolly, “Field Day and LED provided the original template, and barring minor tweaks to ensure the sound levels conform at the two offsite measurement positions set by [acoustics consultants] Vanguardia, we now have a winning formula.” These positions were 150 metres apart, one of them being a high-rise tower block.

Capital provided sound for four stages and the VIP area but it was the two main stages — designated the East Stage and North Stage — that saw the deployment of MLA. On the first of the two consecutive weekends that All Points East took place, main stage headliners were the Chemical Brothers, The Strokes and Christine and the Queens, and for the second weekend, it fell to Bring Me The Horizon, Mumford & Sons and Bon Iver.

Retaining the sound design that has served them so well on this site, they rigged 13 MLA elements plus an MLD Downfill on either side of the 20-metre Star Events VerTech stage, with a side hang of 8 MLA Compact on stage right only. Since the area stage left is the sensitive sound area Capital merely provided 2 tiny speakers running on a radio link off a localised feed to service the wheelchair users compound. Underpinning this was 14 MLX subs in a broadside cardioid array, 8 Martin Audio DD12, which have now become the standard front fills, and a total of 28 MLA Compact on the three delay towers, with the rear one boosted by 3 Martin Audio SX218 subwoofers. “The third delay was sited at 115 metres and I find this addition creates warmth and punch past that point,” said Connolly.

System teching this stage once again was the experienced Dan Fathers.

Over at the Orbit-roofed North Stage, where scenic skins in concentric arches, gave it a Hollywood Bowl feel, acts such as Primal Scream, Anna Calvi, James Blake, Roisin Murphy and Interpol performed. Here, the PA hangs comprised 11 MLA elements and a single MLD Downfill per side. LF extension was provided by 11 MLX subs with 8 Martin Audio W8LM as front fill. The Star masts were wrapped by Hangman, with extremities sprayed black, to amplify the PA hangs, and the stage, and hide the structural elements.  A single delay point was set, with 8 MLA Compact elements populating the tower. Once again, Capital provided an experienced MLA system tech in Ben Turnbull.

Capital’s crew chief was Tim Patterson, who said the only problem during the build-up had been the rain, and the consequent change in humidity and atmospherics. “This changed the sound propagation by as much as 5dB,” he said.

Patterson, a seasoned touring monitor engineer who was only recently introduced to the crew chief role, could scarcely have been more relaxed. “It’s a pleasure working with LarMac LIVE and Ian Greenway, who really know what they are doing. Everyone on the site has been brilliant, and for us, it’s just about seeing whether we can make any improvements.”

One band for whom Martin Audio’s signature sound proved excellent were Friday night headliners, The Chemical Brothers. Said their FOH Engineer, Shan Hira, “I am never disappointed to see [MLA] on a festival spec.”

Using his own FOH set-up, and mixing the show on a Midas XL4, he said, “I am always looking for an even coverage, clarity in the tops, and punchy, weighty subs — and MLA did a good job allaroundd. The system was set up well and the sub coverage was even due to a well-placed sub array. Dan [Fathers] did a very good job.”

His views were shared by Russ Miller, Johnny Marr’s FOH Engineer. “I thought MLA sounded great — punchy and hi-fi without being harsh. It was well set up and I’m pretty sure I employed zero EQ to my mix.” He also highlighted the system’s great advantages, namely that MLA makes it possible for higher levels to be achieved within the bowl area while reducing substantially offsite. “[Victoria Park] is always going to be a difficult site given the proximity to houses but as modern live engineers, we should be aware that government levels will continue to decrease so we need to be vigilant and mix smarter. MLA goes a long way to making that possible whilst still being exciting for the crowd.

“The bottom line is that the Capital guys were amazing as always and the PA a joy to mix on.”

After the event, LarMac LIVE’s production manager Ian Greenway, stated: “Victoria Park has, as with a lot of outdoor London venues, had challenges of late in terms of audio levels and the quality of phonic experience for audiences.

“Over several years we’ve successfully deployed Martin MLA (and its siblings) on our outdoor stages with fantastic results, both on and off site.

“Creating sound pressure levels this year that are 2-3 dBA greater than previous, we’re super happy with the results and were able to offer a great sounding system to incoming engineers to harness and make the most of.”

Granted a long-term contract from the local authority this is now seems set into London’s festival landscape for the foreseeable future.