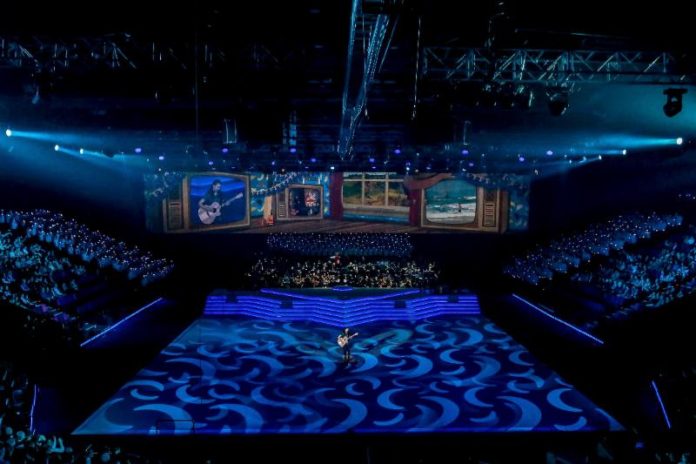 The event, which is now in its 13th year, was held at the Brisbane Convention and Exhibition Centre in Queensland, with a view to mentor the next generation of performers, while providing opportunities for them to work with professional artists.

Zachary Burton, co-founder of IKONIX alongside business partner Richard Saunders, worked with the CGEN team to manage and coordinate the production’s entire lighting and video aspect.

Discussing why IKONIX selected the award-winning media server, Burton stated: “The Ai RX8 server is a high performance media server. The integration between Ai RX8 and our lighting console for CGEN was fantastic. Integration was high on our agenda as we had two other media servers in operation as well as our Ai systems. Ai was also the easiest system to program and make changes to on the fly, which is an aspect we really like.”

The video content for CGEN’s back screen was displayed at a resolution of 7000 x 1080 pixels and managed over four layers.

“We used a lot of timecode integration so we could synchronise video playback with lighting, automation and the live bands running click track. We had a mix of playback as well, including free run content that integrated with the timecoded sections.

“Ai does live editing really well. For CGEN we introduced things like flipping the orientation of content, colour correction, colour intensities and playback speeds to keep the content engaging and upbeat,” added Burton.

For the setup, IKONIX networked an RX8 Ai server as the main server and a custom-built back-up server running Avolites’ MIAMI dongle. A second dongle was used on the team’s Metabox laptop computer for pre-programming and testing. The entire network was setup to operate over Ethernet via Art-Net.

Burton concluded: “Being in Australia can sometimes mean it is difficult to receive the correct support from big overseas companies. That is not the case with Avolites. Their team has been great to us and their software developers are forward thinking and always open to suggestions. The customer support is phenomenal and we love working with them.”

CGEN was presented by the Department of Education and Training and sponsored by QUT, AEG Ogden, The Courier-Mail, Network Ten, Nova 106.9, The Brisbane Convention and Exhibition Centre and QSuper. More than 1,800 students aged between 4 and 17 took part in the event.