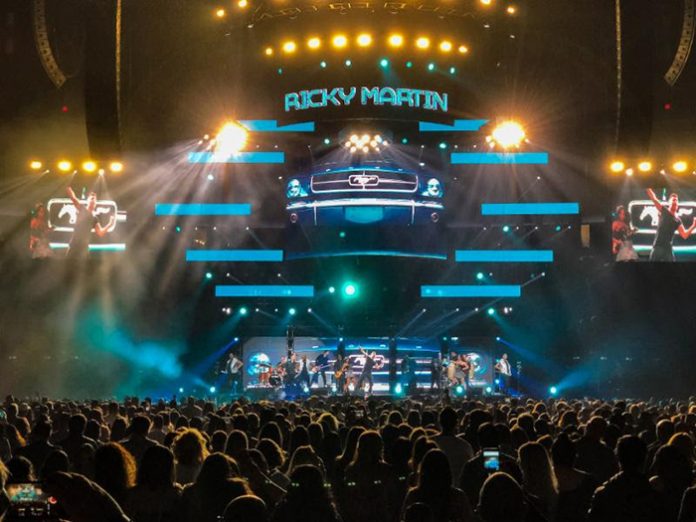 Some of the biggest names in Latin music landed in Las Vegas in January 2018 for a night at the Calibash mega-concert. Held at the 20,000-capacity T-Mobile Arena, the staging featured an array of LED screens with content fed from by Avolites Ai Infinity RX8 Media Servers.

YC3 Lighting Design supplied the Ai servers to VJ Director Richard Vicens, who oversaw the visuals for latin/urban music stars including Ricky Martin, Jennifer Lopez, Ozuna, Maluma and Bad Bunny. The staging featured 18 screens in total. “All of the artists wanted to give their audiences an awesome show,” said Vicens. “As VJ Director, it was vital for me to be able to design and create pixel maps and LED processing that worked for everybody and be ready to backup all of them with Ai media Servers. The show’s size meant it was certainly a challenge – I have to go through every detail to make sure the audience is going to have an incredible visual experience.”

Racked in Vicens’ video power arsenal were 2 Avolites Ai Infinity RX8 servers, which each boast a 7-inch colour touch screen displaying the Ai 3D visualiser. He used the Avolites RX8’s 2 Gigabit Network ports to connect to Art-Net, to ensure reliable and robust networked control of the whole show. “The main challenge as VJ Director was to generate the logistics for this type of show as once the show starts, it doesn’t stop!” Vicens added. “As soon as we’re live, it’s back-to-back performances on a turntable stage, which allows us to have one performance running and the next performance standing by. That means that we need to be able to transfer the shows between the Ai servers.”

To achieve this, Vicens used Avolites Ai v10.1’s Output Configuration page, where all video outputs and Art-Net output were set up. This workspace includes simple yet powerful tools for LED screen configuration, a navigable mapping editor for projection mapping and Art-Net pixel mapping system. “After I created a content pixel map based on the Ai Show file, I configured an output map, based on how many outputs the individual acts’ video operators provided, to do the show,” Vicens explained. “In the AI showfile, each LED screen had its own mixer and layer. I generated multiple output regions as output pre-sets, each programmed as a DMX channel. This let me have control of everything independently, at each moment, and I was able to make changes live on the screen that I wanted to work with.”

“We had a great team for Calibash Las Vegas!” Vicens concluded. “I’d like to thank PVG, who provided all of the LED screens and LED processing, YC3 Lighting who provided all the Ai kit, and Ruben Laine from Avolites’ US Distributor Group One for awesome tech support.”