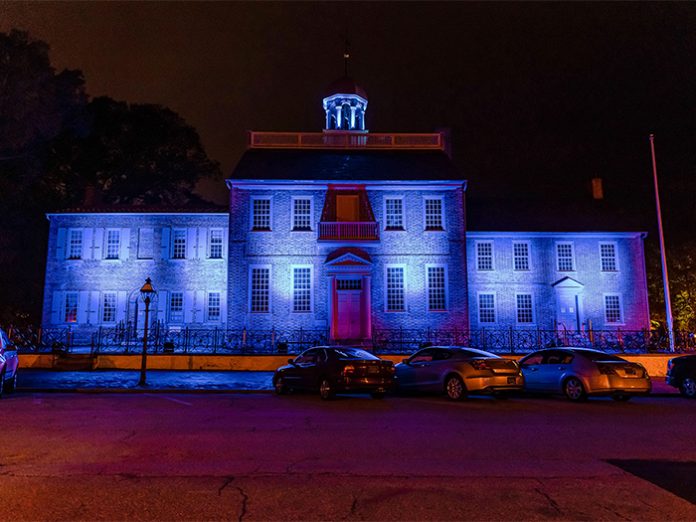 After months of lockdown, economic uncertainty and general anxiety, Main Light industries’s John DiEleuterio proposed the lighting of several landmark buildings in Wilmington and state capital Dover to bring positive energy and fun into the environment that could be enjoyed by all citizens. He took his idea to Wilmington Mayor Mike Purzycki and his team who fully embraced the initiative.

The event entailed the illumination of six prominent buildings, three of which – The Old State House and the Governor’s official residence Woodburn Mansion, both in Dover and the distinctive spire of St. Anthony’s of Padua Roman Catholic Church in Wilmington – were all lit using Astera AX5 TriplePAR wireless LED fixtures.

Kit for lighting all buildings was supplied by Main Light Industries working closely with Electro Sound Systems (ESS), and DiEleuterio energised a volunteer crew of dedicate technicians and others equally passionate about lighting to deliver this visual treat. The illuminations encouraged people to come out of their houses and drive around the observation areas, some for the first time in months, to see areas of their cities in a different light. Social media lit up and it brought the cities of Dover and Wilmington a much needed feelgood factor.

The buildings were lit in blue for frontline / essential workers for three nights and then on the Monday Memorial Day evening, the colour scheme shifted to red, white and blue to honour all the soldiers who have died in the line of duty. The six pop-up lighting schemes installed just for the weekend were joined in the action by other buildings around the cities of Wilmington and Dover which already have permanent architectural lighting. “It made everyone feel alive with camaraderie, creativity and a real sense of purpose recapturing some of the spirit of this amazing industry in which we live and work!” he stated.

Main Light Industries has a large rental inventory of Astera fixtures including AX5 TriplePARs, AX1 tubes and Titan Tubes, and the AX5s with their practicality, power and rich colors were perfect for the job. The trickiest of the three Astera-lit buildings to light was the steeple of St Anthony’s – an attractive Romanesque revival-style building in the Little Italy area of Wilmington. The church is also well known for its annual week-long Italian Festival in June, which was cancelled this year due to the pandemic.

24 AX5s were ensconced within the steeple’s bell tower – all manually carried up the tiny, winding internal staircase – and another 21 AX5s were rigged on pipes-and-bases positioned on the roof of a school opposite. All of these were run wired from local power supplies. Lighting for the site was run by Dale Mahoney and Chris Gentile – Mahoney designed, and Gentile programmed on an MA Lighting grandMA Command Wing. Ryan Morris coordinated everything for the other two locations in Dover – the State House and Governor’s Mansion.

He utilised 16 AX5s for the State House, 12 on the ground and four in the pagoda-style roof feature. Eight AX5s on the ground in front of the building grazing up the front façade did a great job of highlighting Woodburn, the Governor’s Mansion. All run wirelessly and programmed using the Astera IR remote. Each day they were taken indoors and recharged before being re-positioned to run from dusk to dawn.

DiEleuterio has long been an Astera fan, and owns AX3 Litedrops, which he rents out to his friends for parties and functions. He noted: “They are highly effective, robust and practical products and were perfect for this type of lighting event,” he said it was also an emotional moment. “It was a fantastic opportunity for our community to unite and celebrate our environment differently, in addition to appreciating the incredible efforts of those who have battled on the frontlines during the coronavirus pandemic plus all those who have died in military conflicts and whilst on duty serving the country.”

He concluded: “I was extremely proud of what myself and the crew achieved as a team. There are so many incredible people in our fantastic industry making it rock, and we all stand together as we try to come through this challenging time!”

Mayor Purzycki commented: “We are all trying to cope with troubling news these days, and I’m especially pleased that John and his fellow lighting and event industry professionals have taken the initiative to brighten everyone’s mood. This is just the kind of positive event that we all need right now.”