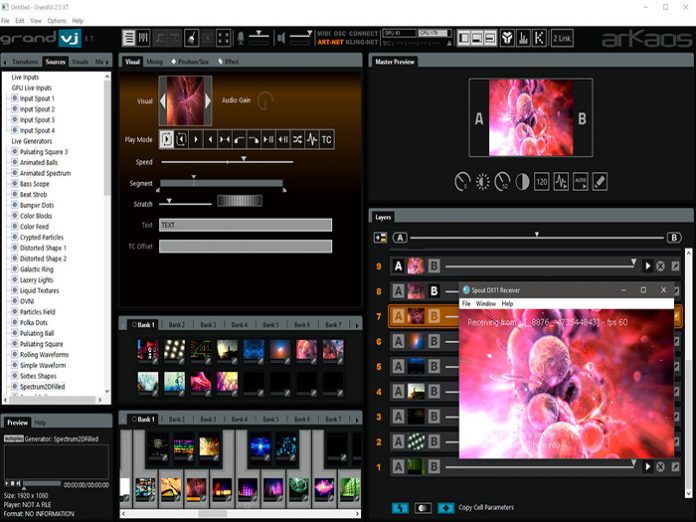 ArKaos launches GrandVJ 2.5 – a brand new version of its hugely popular GrandVJ software designed for fast intuitive control of video sources by VJs, and video operators working in all ‘live’ scenarios – from concerts to festivals to clubs.

Good video and media visuals are integral and vital to the visuality of most events and entertainment environments – from corporate presentations and parties to the largest concerts and festival performances.

ArKaos’s core philosophy has always been to ensure that users and fans of the platform have the most flexible and powerful tools to create potentially spectacular shows. Right at their fingertips.

The launch of GrandVJ v2.5 follows intensive research and development from the ArKaos team, wizards of creative video, and has been comprehensively tested and approved by a number of ArKaos aficionados and enthusiasts.

Says ArKaos’ Managing Director, Agnes Wojewoda, “We have listened extensively to what our VJ and video operator community has been requesting and taken that valuable feedback and their wish-lists on-board in developing this version of GrandVJ”.

GrandVJ 2.5 takes this concept to another level with a host of new features on the platform including:

GrandVJ 2.5 will also help optimise the functionality of the host of pixel-based LED fixtures and media products constantly coming on to the market, as well as for existing ‘conventional’ video surfaces like LED and projection screens.

There is improved support for DPI display scaling and for international characters, as well as faster movie playback for ProRes on Mac and Windows and more rapid YUV colour conversion for all Mac codecs.

The v2.5 LED Mapper now has the facility to merge the Art-Net input with the LEDMapper output, and an Editor has been added to create fixtures with any format of DMX pixel-mapping including channel gaps.

DMX Merger in the LEDMapper ultimately enables LDs and VJs to work more harmoniously and creatively together in one mutually coherent visual space filled with a fusion of potentially shared and treated effects.

The setting of constant values for some DMX fixture channels is now possible and there is a new option for automatic Unicast through ArtPollReply discovery. UI and MIDI control functions set the blending mode and intensity of the DMX Merger, and the whole mapping of file operations with Import, Export and Save is clearer and more concise.

With all v2.5 applications now in 64 bits – as Apple does not provide 64-bit QuickTime –  GrandVJ now uses FFmpeg to read all QuickTime codecs. There is no longer any need to install QuickTime on Windows (like previous versions of GrandVJ where QuickTime was used to play ProRes encoded videos).

GrandVJ automatically sends output through spout video frame sharing, but the application will now only perform a transfer if a Spout receiver is listening.