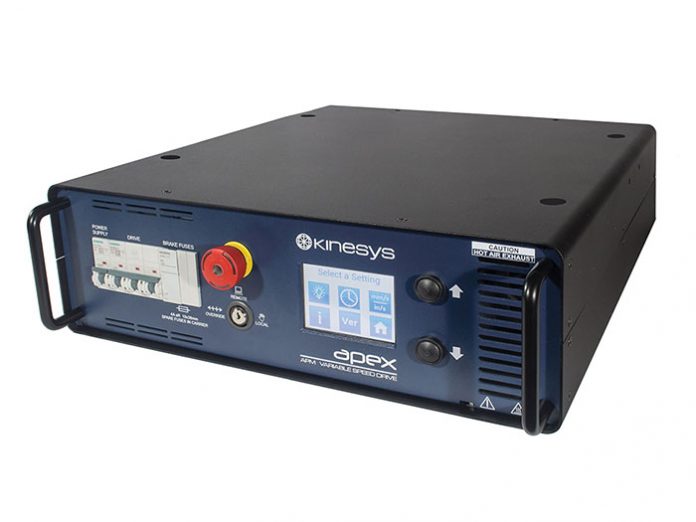 We live in a universe where trending is everything and Las Vegas-headquartered Alpine Rigging are the first company in the US to invest in Kinesys’ new Apex hoists, blazing a trail and raising the bar for safety in motion control and flying objects above audiences.

The company was founded by Brent Armstrong in 2011 and works in all sectors of the entertainment and leisure industry. Alpine’s success rests on its dedication to the ethics of thorough planning, proper risk assessment responsible equipment selection.

It was the touring market that led Brent initially to Kinesys where he perceives it to be “the industry leader” in automation systems, and Alpine’s initial Kinesys purchases came in 2015, comprising 23 x half-ton Liftket motors with Kinesys Elevation drives and Vector control. These have been working constantly ever since.

“It has proven extremely versatile across all the different shows on which we work” stated Brent. Seeing a general increase in demand for safely flying people and objects over audiences, which Kinesys’ Apex products are specifically designed to address, Brent decided to make another investment, purchasing five Apex Hoists, which went directly out on the 2018 Dierks Bentley tour via Christie Lites, providing a specific custom rigging solution in addition to their standard rigging and automation.

These specialised chain hoists were used to elevate the artist himself on a platform which rolls and pitches. Six lighting pods built from trussing pieces were flown over the stage – three upstage and three downstage – all automated and moved into different positions every few songs, changing the dynamics and shape of the performance space.

Four Apex hoists were used on the downstage centre pod which was specially adapted with grills and a bracing system to allow Bentley to safely climb on-board, stay in place and fly down to the stage during the final song of the set.

The Apex system was specified for the job because of all the additional safety features offered including integrated SIL3 rated loadcell monitoring, E-Stop, processing and positioning. In addition to that, the super smooth movement, precision speed and positional control are exactly what the brief required.

Working for production company Wolf & Smith, Alpine Rigging used the Apex hoists for an entertainment segment during the haircare brand Redken’s Symposium 2019 at Mandalay Bay Hotel in Las Vegas – to fly Fuel Girls, a multi-skilled performance group famous for their fire and pyro performance shows. The five performers were hoisted aloft as they performed a series of breath-taking high-octane stunts to the delight of the audience.

For Creative Wolf & White director Marc Lewis, the opening show for Symposium 2019 was a year-long pre-production exercise in the art of perfection. “We’re lucky enough to be working with a client who still appreciates the value of dedicating both the time and the finances to a creative vision that will speak for their brand, so we set about custom creating every last element of the show in-house” he commented.

“Working with Alpine Rigging was a revelation in this regard” he stated, “the culmination of music, fire and visuals for this section of the show was absolutely beautiful as the artists floated perfectly into place on wires that appeared from nowhere!” Brent likes the inbuilt redundancy of the Apex system, the SIL 3 compliance which is essential for flying people and for providing constant feedback to the operator.

The company also has 16 Kinesys LibraCELLs for load monitoring and have just purchased Kinesys’ powerful and flexible K2 software control package. “I think that kit like this coming to the market is having a positive impact on safety considerations. You see many products launched that doesn’t tangibly improve safety … but this brings a lot to the table, and is easily quantifiable” states Brent.

He thinks that automated elements on stage shows are going through a wave of popularity, with designers constantly thinking of new, imaginative and inventive ways of moving people, objects and scenery. “Kinesys is very strong now. The customer service and support are excellent, they have done a great job to maintain their position at the top of a highly specialised field”.

“The Kinesys team has an obvious passion for producing premium equipment, and by association with a brand like Kinesys we endeavour to be at the vanguard of rigging and automation excellence”. David Bond stated “Brent has always been asking more of rigging technology from the time we first met. This has included load cells and lifting systems, but Alpine wants to push the envelope even more while reducing risk, and we are proud to be supplying him with our products and support. His business partners have also clearly demanded value and sound investments. I am glad we tick all of these boxes for their company.”