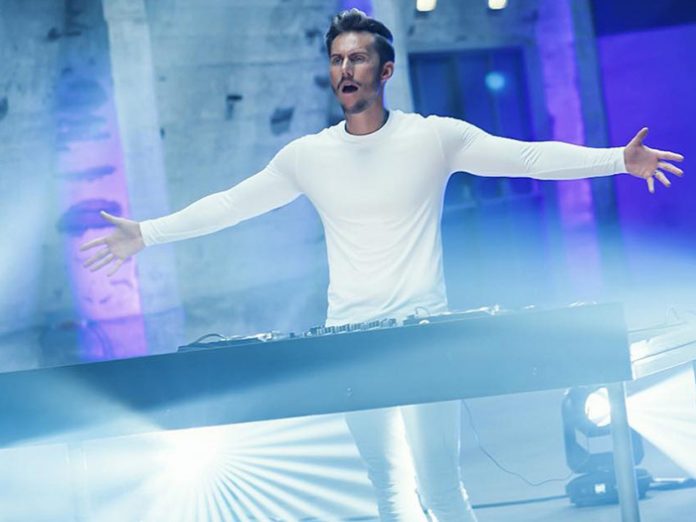 A selection of ADJ lighting fixtures were used to enhance the visual aesthetic of Swedish DJ/Producer KAAZE’s video performance for the DJ Mag Virtual festival, organized to coincide with voting for the publication’s Top 100 DJs poll and to raise money for Unicef.

Despite lots of ambient light on the set of the shoot, ADJ’s Vizi Beam 12RX fixtures were able to punch through to create vivid aerial effects, while automated Vizi Wash Z19 and static 32 HEX Panel IP wash fixtures provided vibrant accent lighting for both the industrial backdrop and KAAZE himself.

Voting in the world’s biggest DJ poll, DJ Mag’s Top 100 DJs, began on July 21st and runs throughout the summer until September 19th. For the second year running, the voting is being accompanied by the Top 100 DJs Virtual Festival – a ten-week showcase of the world’s leading DJs from across the planet. The virtual festival first launched in 2020, in response to the pandemic and the closure of the global nightlife and event industry, when a host of big-name DJs recorded exclusive online sets that were viewed more than 10 million times. The 2021 Top 100 DJs Virtual Festival series will run throughout the summer until voting closes for this year’s poll, with new video sets released each Saturday and Sunday on DJ Mag’s YouTube, Facebook, and Twitch channels.

One of the first performances to be released in the 2021 festival series was from electronic dance music producer, songwriter and DJ, Mick Kastenholt, better known by his stage name, KAAZE. To produce his virtual festival performance, KAAZE’s management brought in Robin Johannesma and his company RJ Music Show Equipment based in The Netherlands. Established for over 10 years, RJ Music provides full-service audio, lighting, and video production as well as project management for all kinds of live events. The company’s highly creative team has also designed tours for a number of high profile EDM artists, and Johannesma toured with KAAZE prior to the pandemic, which meant that he had a good feel for his music and artistic vision.

“I spoke directly to Mick and he told be that he was looking for an industrial vibe and that he was fed up of livestreaming so wanted to do something ‘next level’ for his DJ mag set,” Johannesma explained. “He wanted more of a cinematic vibe, so that it would stand out as different from a regular livestream. To achieve this, we decided not to use any static cameras, always keeping the shots dynamic, while also including lots of closeups. We also switched things up, so went for a light and bright look instead of the usual dark club feel. However, we still wanted lighting to add beams and effects to keep the video visually interesting. That’s where our new Vizi Beam 12RX fixtures from ADJ really came in, as they are bright enough to punch through even when it’s not that dark.”

Having initially invested in around 20 ADJ LED par fixtures, during a period of rapid growth prior to the pandemic, RJ Music planned to make a significant investment in ADJ lighting equipment in Spring 2020. This was understandably postponed, however still went ahead at the beginning of this summer. The company added to its rental stock both Vizi Beam 12RX and Vizi Wash Z19 moving head luminaires as well as 7P HEX IP and 32 HEX Panel IP static LED wash fixtures.

“What we have seen over the past few years is that ADJ is becoming a really pro brand,” commented Johannesma. “We like to do a lot of A-B testing, so have compared ADJ fixtures with competing options from other brands – both cheaper and more expensive. When you compare the price we pay for fixtures, the features and build quality, as well as what we can charge for them on the rental market, I believe that ADJ offers the best return on investment for my company. That is why we have chosen to make a significant investment in ADJ fixtures now, and plan to increase our stock even further over the coming months and years.”

For the KAAZE DJ Mag Virtual Festival shoot, RJ Music provided a full-service production service which included project management as well as the supply of the all-ADJ lighting rig. Johannesma served as the Project Manager, and brought in film maker and editor Zilver Schmitz for the videography. Johannesma connected with Zilver while working on a variety of video projects during the pandemic and found his work ethic and creativity to be a good match to that of the RJ Music team. The venue Johannesma found for the recording was Cultuur Haven Veghel, an industrial complex that has been converted into a multi-room event space. This provided the industrial aesthetic KAAZE had requested while also having the power and other necessary infrastructure and facilities already in place.

At the heart of the simple but effective lighting rig deployed for the shoot were six Vizi Beam 12RX moving heads. These were positioned directly on the floor of the venue, in a line behind the DJ position, allowing for aerial effects to be projected up and over KAAZE as he performed. ADJ’s next generation beam fixture, the Vizi Beam 12RX harnesses the power of a 260W Philips Platinum 12R LL lamp, which features an innovative reflector design to generate an extremely high-intensity beam. This is paired with precision-engineered optics and a carefully curated set of beam-shaping tools to create a powerful and versatile lighting instrument.

“The output of the Vizi Beam 12RX is incredible,” enthused Johannesma, “it’s insane; even in daylight you can see the beam very well. We did an A-B test against another very popular – and more expensive – beam fixture and we found it to be better in every way. It is very fast, I really like the selection of colors and, it has all the features we need. We were very pleased with how it performed on the KAAZE shoot and will be using it for lots more projects in the future. The price is also very good, which means that we’ll be able to use them in larger quantities, and that way we can do really cool stuff.”

Johannesma and his team also deployed four of their Vizi Wash Z19 moving head wash fixtures for the project. These too were placed directly on the floor of the venue, although further back and tucked in close to the side walls of the warehouse-style space. Featuring nineteen 20W quad color (RGBW) LEDs the Vizi Wash Z19 is a powerhouse fixture that offers motorized zoom – for a beam angle of 10 ~ 60-degrees – and up to seven zones of LED control to allow for the creation of ‘eye candy’ chase effects.

“The Vizi Wash Z19 is a really good and versatile LED wash,” confirmed Johannesma. “Again, we did an A-B test with a big-name compact wash fixture that I had liked using before, and the Vizi Wash Z19 proved to be brighter, the colors were way better, and the movement was faster. It also has a pretty good zoom range and was the perfect fit for what we needed to round out our rental stock. It works very well as a wash companion to the Vizi Beam 12RX’s super tight beams. It is also a multifunctional fixture that we can use for lots of things, from creating beam effects, to backlighting DJs, to lighting large areas.”

Completing the lighting setup were four of ADJ’s 32 HEX Panel IP static LED wash fixtures. One was positioned directly behind KAAZE as a backlight while the others were positioned against the venue’s walls to provide colored accent lighting. The 32 HEX Panel IP is an IP65-rated multi-functional wash / blinder / color strobe fixture designed for both indoor and outdoor use. It features 32 x 12W HEX LEDs (RGBWA+UV) arranged into eight individually controlled zones. It offers a 24-degree standard beam angle and is supplied with a magnetic removable frame that can be used to add a diffusion filter to increase the beam angle if required.

“We already had some of the 7P HEX IP LED pars, which we have been very happy with, so adding the 32 HEX Panel IP to our stock was an easy decision,” stated Johannesma. “It is outdoor-rated, so we never have to worry about where we use it, and the colors match our LED par fixtures. The optics are also very good and the output is extremely bright. We currently have eight of these fixtures and, when live events start to happen again, I think we’re likely to invest in another eight. They are a great addition to our rental stock.”

Combined, the beams and washes, movement and static colors, of this all-ADJ lighting setup served to perfectly enhance KAAZE’s performance while maintaining his creative vision for an industrial, cinematic, and light look. Johannesma and his team received very positive feedback both from KAAZE and his label, as well as DJ Mag, and the hour-long set has racked up tens of thousands of online views since it was debuted.