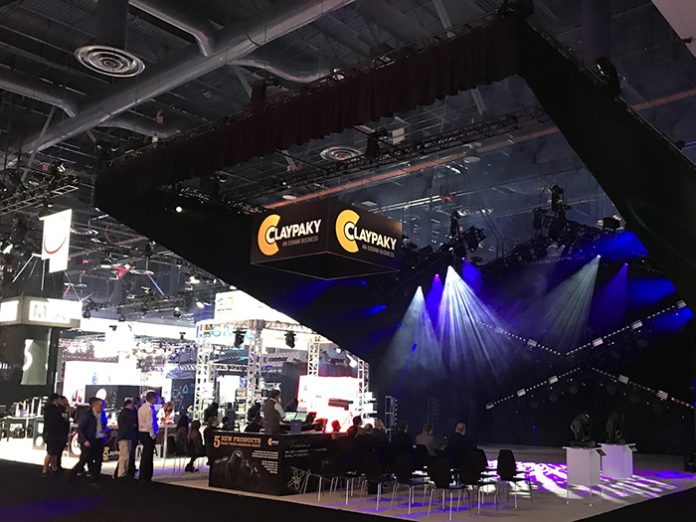 ACT Lighting celebrated one of its most successful LDI shows ever as it brand partners Ayrton, Claypaky and MA Lighting netted coveted awards on the LDI 2018 convention floor, held 15-21 October at the Las Vegas Convention Center.

“LDI 2018 attracted a fantastic group of people eager to see our latest products from the top manufacturers in the industry,” said Ben Saltzman, President and CEO of ACT Lighting.  “We were proud to host a continuous crowd of visitors every day, and it was icing on the cake when Ayrton, Claypaky and MA Lighting won LDI and PLSN awards for their creativity and innovative new products.  This show once again proved how the technology advancements created by our partners and the hard work by the entire ACT family is recognized and appreciated by the community we have the honour to serve.”

LDI 2018 marked the 30th anniversary of North America’s largest trade show and conference for design and technology for live events. LDI has grown to host more than 350 exhibiting companies and close to 15,000 industry professionals.

A team of anonymous judges selected the winners of the LDI Awards. LDI staff visited the winners on the show floor on the last day of the event to deliver the award crystals. Ayrton’s booth was cited in the category of Most Creative Use of Light “for a super-impactful and energetic light show designed by Aron Altmark.” The dynamic show utilized many of Ayrton’s most popular fixtures to light up the show floor with a dazzling display that turned heads throughout the convention centre.

Convention-goers were busy checking out new products from many of ACT Lighting’s partners. Claypaky showcased the Axcor 400 Spot – in its world debut, Axcor 400 Profile and Axcor 600 Profile, all part of the PLSN award-winning LED-sourced product line. Also making its world premiere was the Sharpy Plus, a perfect hybrid beam light and spot suitable for every occasion. Claypaky was a pioneer of light shows at LDI and continued the tradition this year with a display that drew crowds from across the show floor.

MA Lighting highlighted the release of its award-winning grandMA3 line, its first new full range of consoles in nearly ten years with redesigned system architecture for the fixture, feature and effects handling. The system boasts groundbreaking concepts from top industry visionaries presented within a refined user interface; it is designed to make practical tasks more intuitive.

Ayrton introduced its Khamsin-S and Bora-S fixtures at the show. The Khamsin-S automated LED profile spotlight is the brightest of its class on the market outputting a massive 39,000lm. Bora-S is a compact, high output, low power LED wash light complete with gobo projection and framing capabilities for stunning aerial effects. It is perfect for large-scale venues and outdoor and indoor arenas.