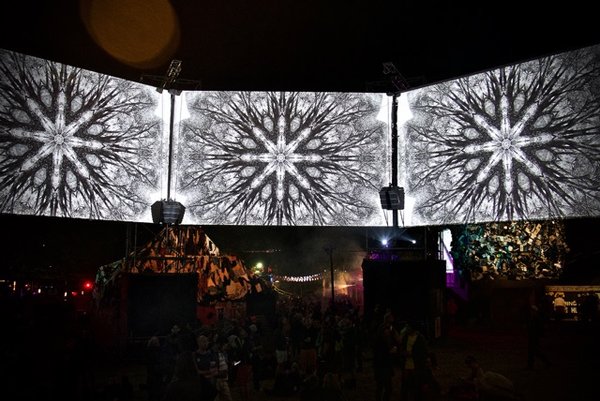 Glastonbury is renowned for being a festival that pushes technological and creative boundaries. Specifically when, Nick Diacre, Technical Director of ddld, partnered with PRG XL Video to bring an innovative 360˚ video installation to the Gas Tower area in Shangri-La.

“We created a 360˚ immersive projection environment in an outdoor arena with a capacity of 1,200. The structure itself is inescapable to the audience, being almost twelve metres tall in places, and completely encompassing the arena. Over the period of four days, we welcomed over fifty guest artists, as well as VJs and AV artists to the arena to contribute content across our 360˚ screen,” asnnounced Diacre.

The 360˚ projection is achieved by mapping eight Panasonic PZ-21 projectors across the playback surfaces, fed by a combination of d3 Technologies, Touch Designer, and Resolume media servers patched through a 32×32 routing matrix.

“We needed to create a system which not only served the purpose of simultaneously projecting eight HD outputs in a field, but also has the flexibility to accommodate the varying demands of the content creators we had performing in the space. The core team of VJs and a handful of those dropping in to play a set were more than comfortable to use one of our media servers to replay their content; but some would simply give us an output from their laptop be it one, two or three screens, which we then fed into the d3 and remapped it onto the eight screens surrounding the arena,” Diacre explained.

Diacre concluded: “Despite designing an incredibly versatile but complex system for this year’s production, we’ve managed to reduce the amount of kit needed to make it happen; this is largely down to using the incredibly powerful and practical media server, d3. We loaded in four days before the field went live, and then spent the rest of the time fine tuning the system and running content. In our line of work, we spend so much time sitting at a desk looking at a monitor or two, to be able to see your work in such an arena is really, really cool.”