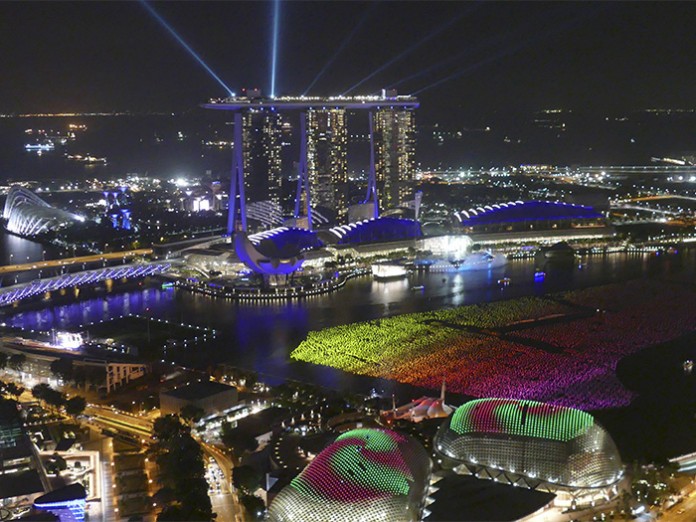 It has become tradition to celebrate New Year’s Eve at the Marina Bay in Singapore – in fact, each year it attracts 100,000 people to this festivity.

For 11 years it has been Esplanade’s job, together with the Urban Redevelopment Authority of Singapore, to organise and facilitate this massive event – last year alone it included eight minutes of firework displays and 20,000 ‘wishing spheres’ along the river. Each sphere was signed by several people during previous months, with messages expressing wishes and hope to the upcoming year.

The organisers tasked local rental company Showtech Communications to provide a solution in integrating the existing lighting installations surrounding the bay with all the extra equipment for these celebrations. In total, Showtech used 48 Robe fixtures, 45 Clay Paky and 300 LED fixtures to cover the whole area.

Under the guidance of Heryadi Mohd Yusof and Ismahadie Putra Ishak as the responsible LDs, a six universe of W-DMX was specified – this system bridged the 400 metres of water (from FOH to the fixtures area). Project Manager William Ang, along with Lighting Chief Jorden Lee and assistant KIat used 12 Blackbox F-1 transceivers with outdoor dual band antennas to setup the link between the two sides of the bay.

“The plug-and-play approach of the W-DMX transceivers provided instant connectivity across the water, which in itself is a difficult task due to the reflective nature of the water surface,” explained the techs.

During the setup process, the team found useful to change the transmission mode to 5.8 GHz: “There was an undetermined radio source at the receiving end giving us a slight interference. We decided to move to 5.8 GHz before not to put the job in jeopardy and to guarantee a secure connection.”

With the aid of the Co-Existence dongle (the W-DMX configuration tool), specific frequency channels were selected for each transmitter to eliminate interference. This configuration took less than 30 minutes and it guaranteed a smooth operation. In the end, the signal never dropped below 80%, even after reducing the output power on the transmitters.

“W-DMX proved its invisi-wire philosophy – it worked as reliably as a cable would have worked!” a team spokesperson said after the successful show.