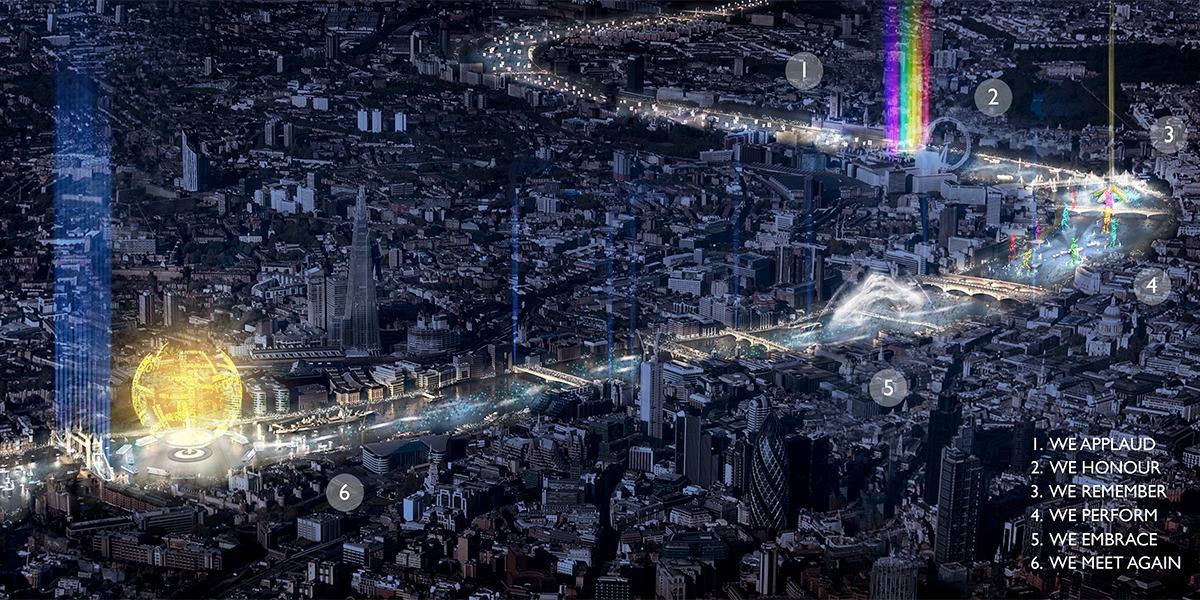 London-based studio, Stufish Entertainment Architects, have revealed its concept design proposal for a ceremony to mark the end of the Coronavirus pandemic, once the virus has been defeated. The developing concept ‘We Meet Again’, is an event aimed to take place on the River Thames in a post COVID-19 reality, where the world will re-open in a different place to what it was before.

Since the mid 1990s, Stufish became the world’s leader in permanent, touring and temporary entertainment architecture. The studio’s portfolio includes an ever-broadening scope of design from permanent and semi-permanent buildings, live touring shows, exhibition and live productions. CEO of Stufish, Ray Winkler, said: “We meet again amplifies the message of hope and embraces the future where we can come together and celebrate the best of human endurance and creativity”.

‘We Meet Again’ will set sail along the River Thames, passing by London’s biggest landmarks such as Big Ben, the London Eye and Tower Bridge. The event will include a series of moored stage sculptures interspersed with kinetic installations, lighting and video effects and a spectacular drone performance.

Flowing through the heart of London, ‘We Meet Again’ will feature six moments, celebrating key workers, honouring community spirit, remembering loved ones lost, return of the arts to the public arena, the experience of embrace following social distancing and the re-opening of the world as the grand finale.

Beginning at Hampton Court and ending at Tower Bridge, the six key moments of the ceremony are as followed: We Applaud, We Honour, We Remember, We Perform, We Embrace, and We Meet Again. 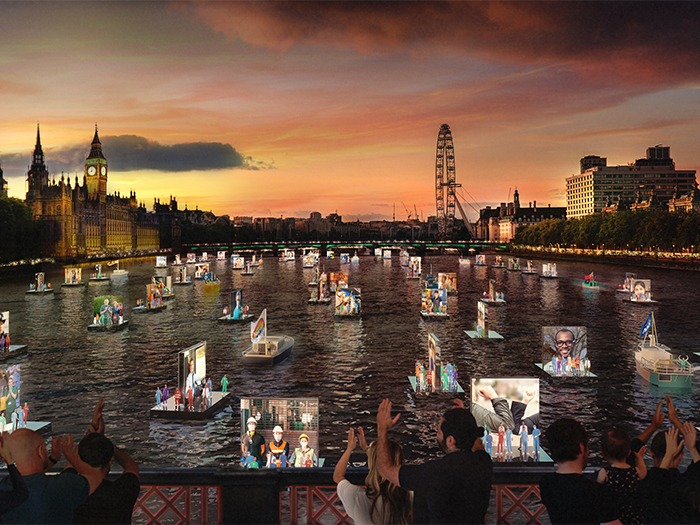 A fleet of 200 video screens will set sail from Hampton Court showing constantly changing faces of frontline workers. Towed East by jubilant sailors, the public will flock to see the portraits of their heroes and by 7:30pm the fleet will dock, sandwiched between Parliament and St. Thomas’s Hospital with screens facing in all directions. As Big Ben strikes 8pm, the audience will ceremoniously applaud to celebrate the key workers who kept the country afloat during lockdown. 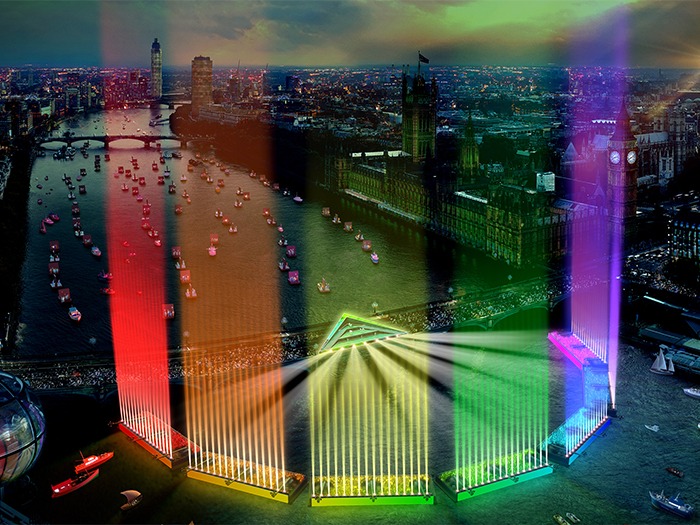 Along Westminster Bridge, in front of the London Eye, we then honour the extraordinary community spirit seen nationwide. As the band starts to play, the barges emit a rainbow of light into the night sky, evoking the countless images of rainbows drawn by children and proudly displayed in windows across the country. 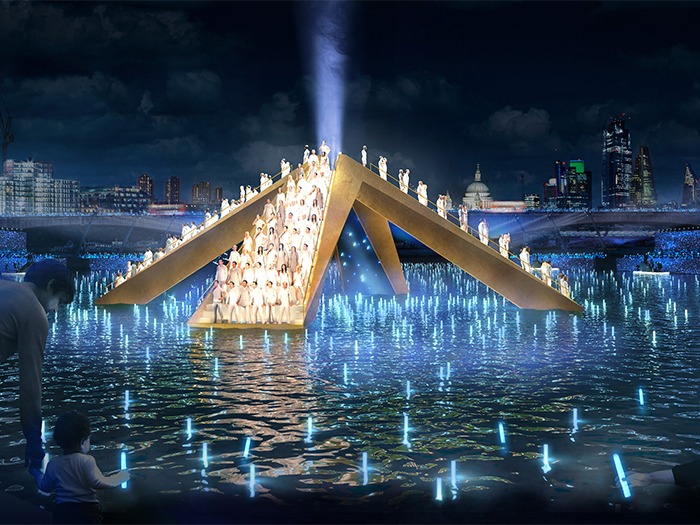 At Hungerford Bridge we encounter a choir, rising from the water on a pyramidal structure. The rhythm of the procession slows down to remember those that we have lost. Key workers release glowing candles, made from a soluble shell and an environmentally friendly bioluminescent liquid that will slowly begin to dissolve into the river. 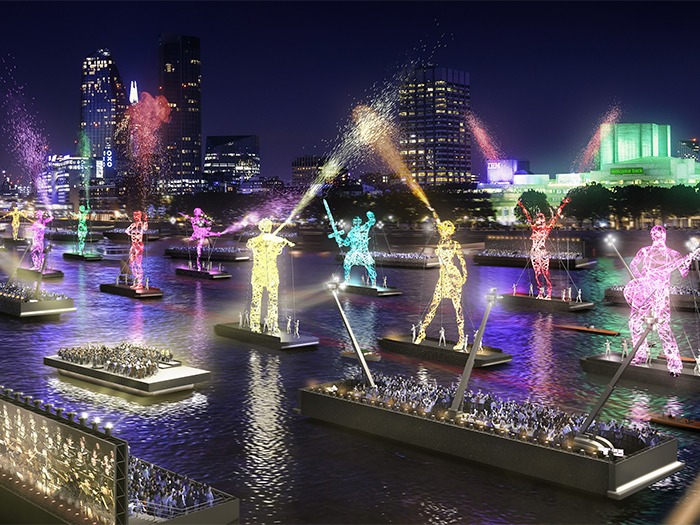 Blackfriars Bridge sees the return of the ‘Giants from the Arts’. Actors, musicians and dancers have had their self-expression limited to online broadcasts, so here we celebrate their return to the public arena, alongside the Southbank Centre, the home of the arts and edge of London’s West End. A troupe of large-scale sculptures, operated by performers, move to the soundtrack of the London Philharmonic Orchestra playing on a barge centre stage. 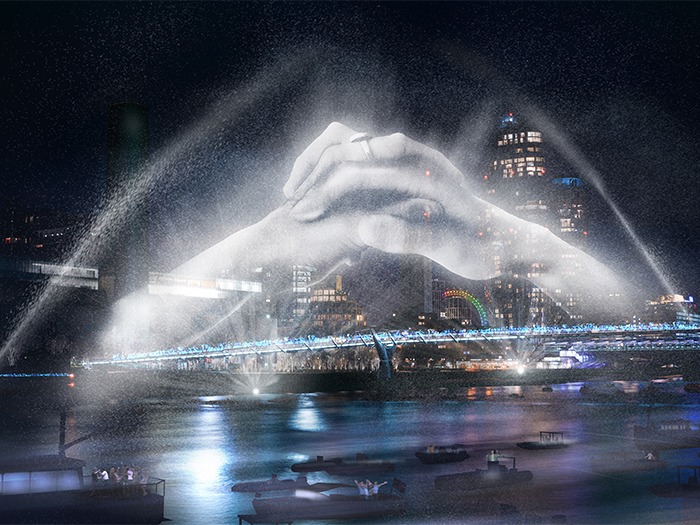 Drifting along to the Millennium Bridge, a strong cloud of mist forms. A place that connects the old and the new, a gathering point of art lovers and believers, now becomes a symbolic expression of reconnection. This is the moment where two hands, projected onto mist, reach across over the bridge to hold each other again. Standing underneath the water vapour, the viewers will feel the gentle touch of water, while experiencing the moment of embrace above. 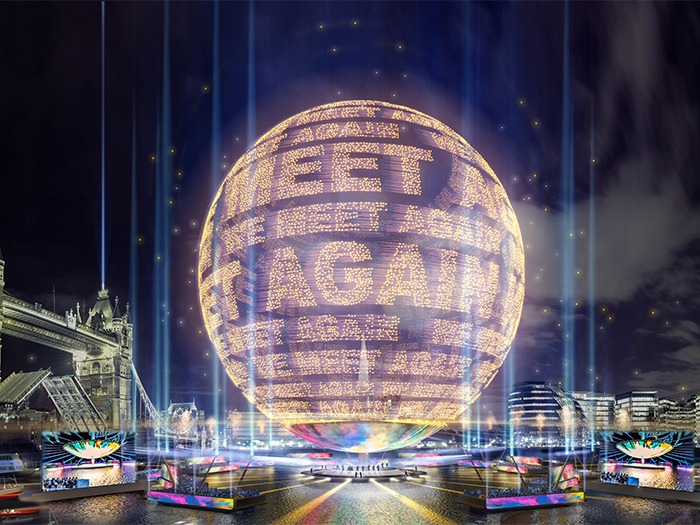 The finale to this Thames Spectacular takes place next to the most recognisable London landmark, Tower Bridge. The event features music performances from a central halo shaped stage, with a morphing, flying drone light show above, creating different words in the form of a sphere, and referencing the global effect of the pandemic. The audience barges and fleet of smaller boats gather and radiate from the main stage. At the encore of the performance, Tower Bridge opens to celebrate and signify the re-opening of the world.