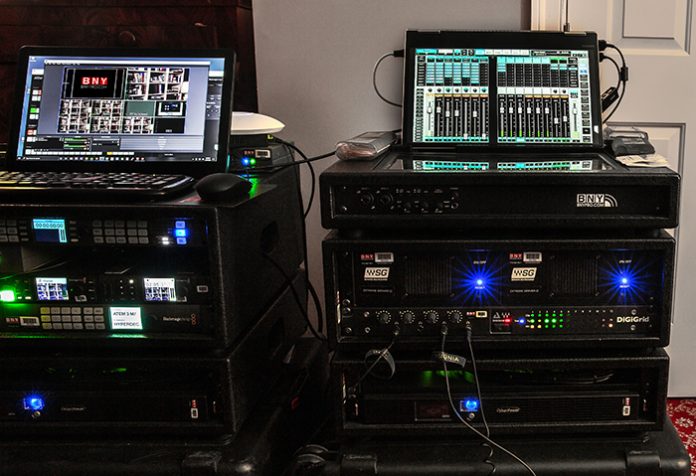 “We were out on the road with a client,” Kristijanto said, “using the Waves eMotion LV1 mixer and also supplying video, lighting, staging, and room accessories such as stanchion, flags, pipe and drape, and more. However, due to COVID-19, the client had to stop doing all live events. They came to us for a solution to be able to do broadcast, without a crew in the room. Subsequently, we needed to build a TV/broadcast studio that was able to handle the client’s needs, such as phone interviews, podcast, video conferencing, direct to camera recording, live network TV interviews, and live virtual events, while being controlled/produced off site.”

He added: “To clarify, the only person accompanying the client is his personal assistant, so everyone else – the audio engineer, lighting engineer, video engineer, shader, producers, and everything in-between – is off site and in a different state. To make things a little more complicated, the client has a team of people who are involved in producing/directing the events who are scattered in different states, and they too need to monitor the feed at near-zero latency!”

He continued:  “Little did we know that our decision to move to the eMotion LV1 in 2016 was the best choice we could have made for a situation such as this, and today we own ten Waves eMotion LV1 mixers. We are now able to easily remote into the mixer from states away. This is definitely a feature that wouldn’t be as easy to do with any other console on the market! The LV1’s strengths and capabilities continue to reaffirm that we made the right decision four years ago.”

Kristijanto commented on their setup: “We call our studio here at the BNY headquarters the Control Studio, which includes two SoundGrid Extreme Server-Cs and an Apogee Symphony I/O Mk II 8×8+8MP, and the studio we built for our client, the Remote Studio, includes two SoundGrid Extreme Server-Cs and 3 DiGiGrid IOX I/O interfaces. The Remote Studio audio signal chain starts with either a DPA 4017B shotgun mic or a DPA lavalier mic, into a DiGiGrid IOX I/O interface. The client has an option of monitoring through an IFB or a wedge, depending on the event. Out of the console, the audio gets embedded into the video system, which then goes into a custom server that takes care of the point-to-point streaming over to our Control Studio for low-latency monitoring. Once the data is decoded by another custom server in the Control Studio, the audio then goes into a Waves LV1 system using an Apogee Symphony I/O, feeding into the Meyer Bluehorn System.”

He continued: “One of the big advantages of this setup is that we are able to have different engineers/operators control part of the system from different locations. For example, we can have a video engineer in Pennsylvania, a shader in Washington D.C., and an audio engineer in Iowa, all run an event from their homes.”

On choosing the LV1, he commented: “There are several unique benefits using the LV1 system. As an audio engineer, I like that I’m able to make a custom signal flow to the individual channel strip. Other consoles don’t have that capability. Typically, the channel strips, such as the EQ, dynamics, effects, etc., are predetermined in other consoles. The Waves eMotion LV1 allows us to integrate easily with plugins so I can precisely shape the sound to my liking.”

“Waves plugins are an integral part of our workflow,” he said. “We are currently using the Mercury, SSL 4000 Collection, Abbey Road Collection, Dugan Automixer + Dugan Speech, Pianos & Keys, API Collection, and the CLA Classic Compressors bundles. If I would have to choose only 4-5 must-have plugins, I would start with the Waves WNS Noise Suppressor, since rather than only having one control, the WNS lets me have control in several frequency bands, allowing me to suppress some bands, without affecting others.”

He furthered: “The Primary Source Expander (PSE) would be next – it is unique in that the talent doesn’t always want to mess with IFB and would prefer to use a wedge instead. The PSE really helps minimise the wedge noise into the talent’s feed. I would also include Vocal Rider, which is a true timesaver, as we required something that could keep up with a dynamic speaker. The talent can sometimes talk very softly followed by a dramatic change in volume. By putting this plugin on top of the signal chain, it helps keep the level consistent down the chain, so it hits the dynamics at about the same level.”

He said, that way, the presenter’s voice is always present regardless of the volume changes. “And of course, the F6 Floating-Band Dynamic EQ – since we can’t be there physically to do things like properly place microphones, we have to rely on personnel with limited production knowledge and mic placement isn’t always optimal. Thanks to the F6, proximity effects due to poor mic placement are taken care of automatically. It also allows for easy transition between our female talent and male talent vocals as well as quick turnarounds.”

About using the LV1, Kristijanto added: “Another great feature is that the console is extremely compact in size. When working in a residence where space is limited but we do not want to sacrifice sound quality, the LV1’s size makes it easy for us to maintain our high-quality audio standard, without taking up the large amount of space that most mixers of that caliber require. To further this point, the backup capabilities are similar to what you’d find in ‘big-boy’ consoles, which leads me to another benefit – stability. The issue of stability is something that we cannot compromise on, and currently our LVfly system has been running continuously for months without a single glitch. A final feature that I would like to highlight is the overall design and scalability of the LV1: the flexibility of being able to add an additional I/O whenever and wherever is unprecedented!”

“In these challenging times”, Kristijanto concluded: “it is becoming a requirement to support live streaming and remote events, and the Waves eMotion LV1 has proven to be indispensable. We are fortunate to have it at the heart of our remote streaming systems.”