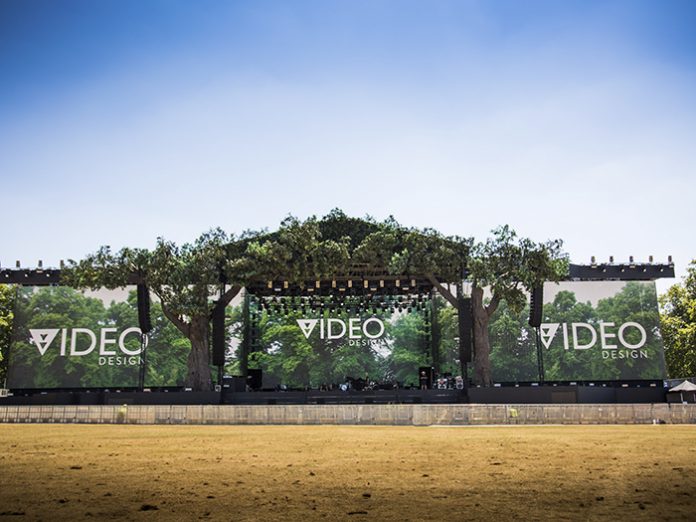 “BST sees the entire stage enclosure, back wall, sides and wings totally covered with LED video; right up to roof height 94 linear metres of it,” explained Alex Leinster of Video Design who provide all the video hardware and infrastructure.

“But Water’s show needs a much flatter screen, so we were asked to move the entire backwall section downstage as a far as possible.”

Water’s show was the first night in a run of 3, with the Cure headlining the following night. “What Jeremy Lloyd of Wonderworks conceived as the solution to the BST festival set-up was flawless,” explained Water’s Video Director Richard Turner.

“We got pretty much just what we wanted. The origins of Roger’s show come from Desert Trip festival in the US in 2016. That stage is similar to BST with the stage interior wrapped in a LED screen. We knew from that early experience that Roger’s show didn’t really work. His show is very filmic and compositionally that set-up is very difficult because what works from one angle doesn’t from another as far as the wider audience view is concerned. So we had to put Alex and the Video Design crew through it and they really pulled it off.”

The switch back to the normal BST configuration for a headline show by the Cure the following night would be tight. The Cure’s Production Manager Phil Broad consulted closely with Leinster.

“As far as the changeover from Roger Waters show the previous night, everything was pretty much on time. We planned around Alex’s schedule and when we arrived at our allotted time at 2:00 am they were already ahead of themselves.

“The guys from Video Design did an absolutely amazing job and worked tirelessly. The thing is with BST the screen is so huge it is the show. If it’s not right it will look dreadful. Alex’s guys were 100%, I couldn’t ask for more. They worked from the minute Waters show ended right through to late morning. It was very smooth for something that big. We had a very good day.”