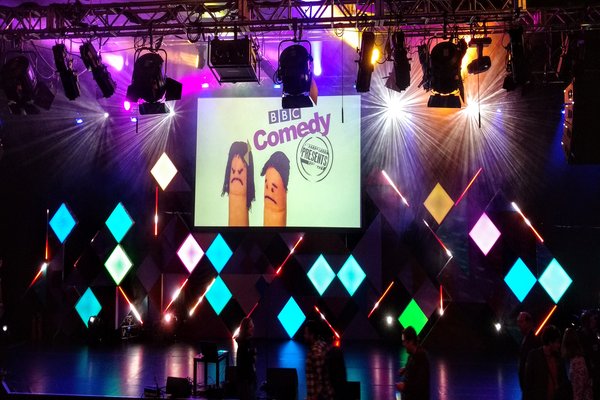 The festival saw comedic performances from Frankie Boyle, Sarah Pascoe and Phil Wang illuminated by Utopium, who utilised a number of new additions to their equipment list, including a range of lighting effects to the BBC’s Big Blue Tent, housing broadcast, theatre, music and comedy performances.

Utopium’s Project Manager, Jon Newman commented: “We have built a strong working relationship with the BBC over the years and it was great to be back at the Fringe again. We utilised a variety of new and innovative fixtures this year and everyone was extremely pleased with the outcome. This was the seventh year we have worked on the Fringe and our second working on this new site. Creating an event within the grounds of a Grade 1 listed building brought complications. We were very diligent alongside the BBC to respect the historic architecture of the building and minimise the impact on the school.”

As part of the set lighting package, the Utopium team supplied 24 Pulsar Chroma Panels, and another new addition to their stock, 30 Martin VDO Sceptron 10’s. The VDO Sceptron 10 is a linear outdoor-rated LED video fixture with 10mm pixel pitch and an extensive range of optical accessories.

Utopium also debuted some further recent technical acquisitions such as the Hippotizer Amba Media Server and the Pixel Mappera. The Hippotizer boasts HD and 4K playback as well as 500GB of media storage. Two Avolites Tiger Touch II Control Desks were also new to the Utopium inventory, boasting increased processing power, a faster graphics console and a brighter screen compared to its most recent previous iteration.