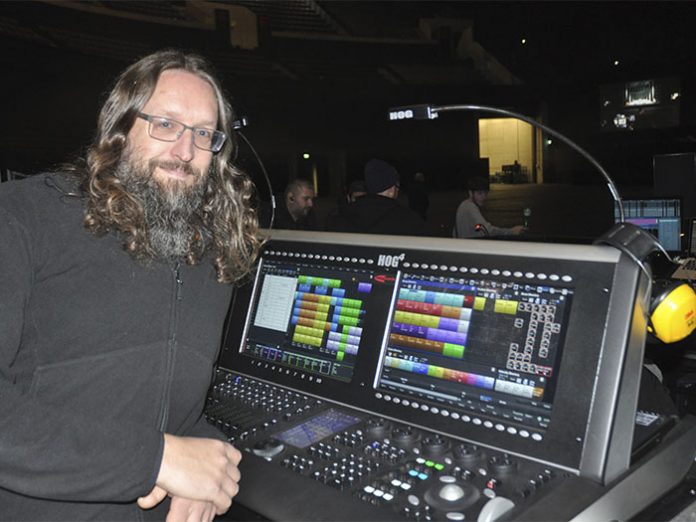 Biffy Clyro has blown people’s socks off when they headlined Download on 10 June this year.

“We used the exact same show we toured at the end of last year,” said Lighting Director Richard Larkum, “With my full light show and all the physical and video elements of Misty’s original stage design.”
That’s no small undertaking, the set is a striking example of forced diminishing perspective created from a stepped stage and portals constructed of video tiles in concentric array with an elongated landscape screen behind. It’s as eye popping as live video gets and is in no small part due to Larkum’s masterful combining of video and lights as a coherent whole.

“We took the production back into rehearsals for this, a one day set up, two days working as we had a lot of new faces in the lighting, video and set departments,” continued Larkum.

“Video Design, who supply the rear screen and portals, devised with our rigger, Yose Lawson, a means whereby we could deploy the whole system for a festival show and have it concealed for all the preceding acts.
“Essentially the stage set split into about six pieces for temporary storage backstage while the portals were on a Kinesys system that tracked to each side of the stage and were then raised out of the way for the rest of the day. It was a lot to do – for the Download show we worked from 2am through till 11am on show day to rig it all. It’s such a busy time of year that key members of the original Video Design crew were just not available, but Alex Leinster,the Head of Video Design, came and got his hands dirty himself just to make sure it all worked to perfection which it did. Even Jack Banks who cut all the IMAG cameras for the tour was unavailable, but Leinster brought in Sasha Moore who, with just two days rehearsal and script notes from me and Jack, fed me the directors’ cut I needed.”

That’s tougher than it sounds, Larkum’s show is heavily punctuated with rapidly cascading cues of video and effects.”

Larkum came away well pleased. “Because of the nature of the lighting design the house rig just didn’t lend itself to what we needed, so the festival PRG guys had to rig three special drop bars of extra lights for me off the house trusses to get the exact spacings I needed for the perspective look. After the show a couple of them came up to me and said:Now we’ve seen the show it really was worth the extra effort.”